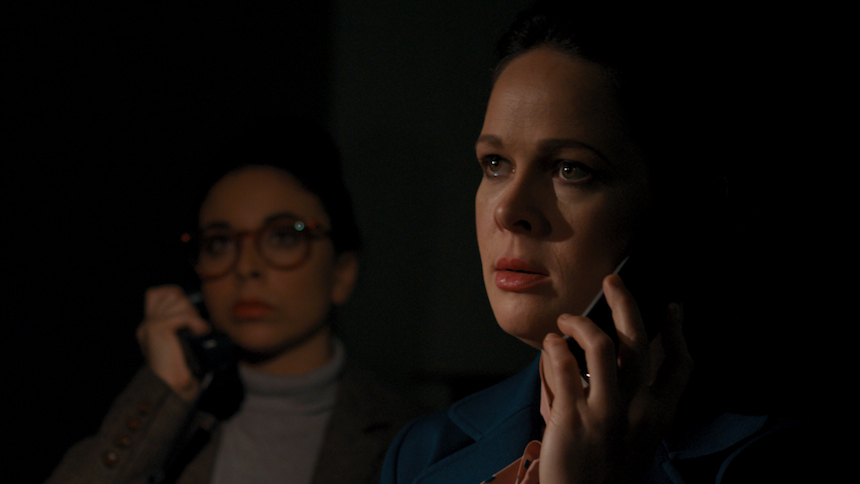 In the tradition of films that pull back the curtain on the inner workings of showbiz, writer/director Daniel Warth’s Dim The Fluorescents shows us the ins and outs of… corporate training seminars. It’s not the most exciting place to be, surely, but thankfully this movie has a bit more to say.

Our two protagonists are a struggling actress named Audrey (Claire Armstrong), and her best friend and associate, aspiring playwright Lillian (Naomi Skwarna). Both are small fish in the big, big pond of the struggle that is show business, a place of constant auditions, rejections, and waiting around for that one phone call which can change your life. The pair have no choice but to devote themselves to the only paying work available: role playing for those aforementioned corporate seminars.

At first, it’s unclear if Warth and co-writer Miles Barstead wants us to sympathize with the duo or mock them. It’s a paying job, sure, but seminars don’t look like the best outlets for creative expression, yet Claire and Audrey treat every gig with the seriousness of a Shakespeare production, rehearsing dry, business-oriented text as if they were reciting the Bard over and over again and putting in all sorts of unnecessary flourishes; all for five or six-minute gigs in front of office workers who are probably mandated to be there.

It’s easy to label these two ladies as extremely deluded and out of their depth, and for a while, that seems to be this movie’s M.O. Eventually, however, the neurotic Audrey, who seems on the verge of a nervous breakdown, and the buttoned-up, stick-in-the-mud Lillian are humanized somewhat – Audrey even gets a love interest, an office-drone type (Todd Graham) who doesn’t really need to be here – and that’s mainly because their situation can strike a chord with anyone who’s tried to make it in showbiz, having to take on desperate jobs for money (remember, at one time Brad Pitt dressed up as a chicken) while trying to make it big.

By the time real life bleeds into fiction, Lillian and Audrey have the big tour-de-force performance they’ve been wanting to put on all along, even if it is for a disinterested audience. In this way, the movie asks the same question anyone wanting to be a star has probably asked themselves: do you stick to your guns and suffer for your art, or do you sell out for fame?

Halfway between a deadpan comedy and a drama, Dim The Fluorescents is shot in a visually drab, straightforward manner – probably intentionally, in keeping with the nondescript functionality of the world of corporate seminars. But at the very least it has something to say, which makes spending two hours with these two ladies interesting for anyone who’s been in their shoes.

Dim The Fluorescents screens again at Slamdance on Tuesday 24 January at the Treasure Mountain in Ballroom at 6pm. The festival runs until 26 January.

Do you feel this content is inappropriate or infringes upon your rights? Click here to report it, or see our DMCA policy.
Daniel WarthDim The Fluorescentsslamdance 2017