Review: THE FOUNDER, There Will Be Burgers

Directed by John Lee Hancock, Michael Keaton stars as Ray Kroc in THE FOUNDER, a salesman who built an empire. 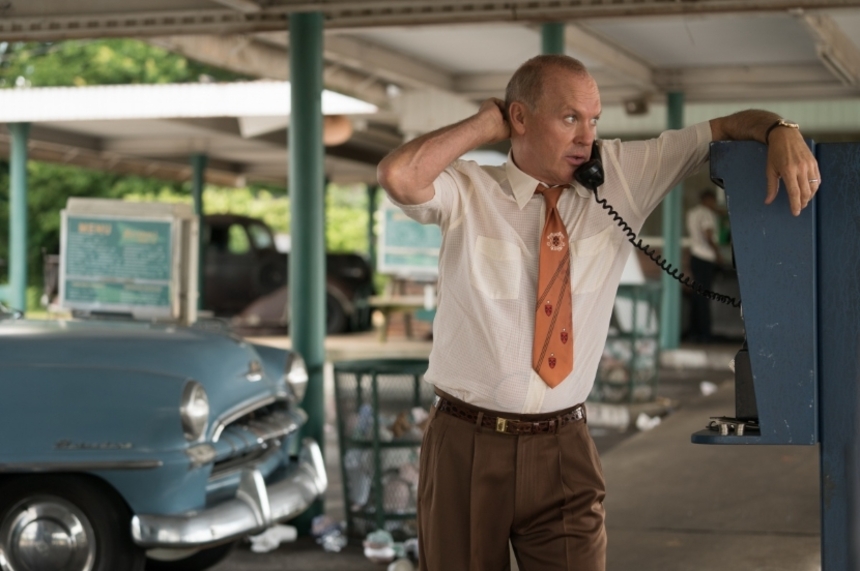 The evolving nature of the film biopic has recently become quite interesting to me. Insofar as Pablo Larraín's Jackie is as much about Theodore H. White's Life magazine article as it is about the iconic First Lady, so John Lee Hancock's The Founder is as much about the process of business franchising across the United States in the 1950s as it is about the man who made McDonald's the corporate empire it is today.

That is not to say that Michael Keaton's performance as Ray Kroc, nor the delightful duo of John Caroll Lynch and Nick Offerman, who portray the McDonald brothers Mac and Dick (respectively), are not important or excellent. Of course they are. Kroc innovated the franchise model and was the driving force behind nationalizing fast food; for a while he was the richest man in America. The McDonald brothers innovated the process whereby cooking and serving burgers and fries was approached more like an industrial assembly-line than a kitchen; efficiency and repeatabilty are king.

By focusing on the minutiae of moving from a single, fresh-thinking restaurant to a nationwide, and eventually international, chain, Robert D. Seigel's script elevates The Founder to a story about America as an idea and how that idea is expressed at a certain point in the nation's history, akin to the way Easy Rider or Ace In The Hole or American Honey are fascinating inquiries into what, exactly is America in the late 1960s, the late 1940s or in the mid 2010s.

Sure, it is simple enough just to lob out a few 'great cinema' titles and call it a day, but it also becomes obvious that (particularly because I am Canadian) the very titles I choose from thousands of excellent movies about America, is more a reflection of what I think of the complex toffee-swirl of regions, ideals and flavours that is the United States.

The Founder is told from the perspective of Ray Kroc, the travelling salesman who took the idea of fast food, and brought essentially one restaurant in America to one (or more) restaurant in every town in America. At the outset of the film, in the early 1950s, Kroc is pitching high efficiency milk-shake machines to owners of drive-in restaurants, you know, the kind where the waitresses on roller-skates serve fries, ribs and shakes through the car windows of teenagers.

His smooth sales pitch, road-warrior attitude and collection of disturbingly garish neckties set the stage for the age-old rags to riches story, the one where elbow grease, gumption and a wee bit of luck realize the untapped potential of the individual. The rosy rural cinematography by John Schwartzman, who shot Colin Trevorrow's Jurassic World, and will soon be shooting Star Wars Episode IX, and the generic yet oddly satisfying soundtrack, courtesy Carter Burwell, both underscore the familiar nature of this story. Surprisingly, the execution is 180 degrees from any semblance of the direction of the movie.

It certainly helps that Michael Keaton has always had a knack for playing a character both ways. Take, for instance, the genius or off-putting contrast between his Bruce Wayne and Batman as but one example. He plays Kroc as a cheery sociopath who fluctuates between frustrated and emboldened; mocked and worshiped. At the very least, he takes his "Power of Positive" records very seriously, and celebrates the notion of 'workaholic' that baffle his both his wife and their country-club social circles.

Laura Dern is saddled with the thankless role of neglected wife here, and while she makes the most of her few scenes (as Dern always does), the movie is more interested in her for how Kroc treats her. This is at best a sounding board, and at worst a disposable steppingstone while he pulls himself upwards.

The movie delights in making Kroc the go-getting, highly motivated everyman who eschews laziness, and for his own gain, pulls hard-working everyday folks into owning and running restaurants and a juicy slice of the great American Dream. And in the same breath follows that sort of upbeat montage with the bitter aftertaste of how much of an uncaring/unaware asshole he is, both at home and while working. He is the great indifference of capitalism, or an embodiment of the myth of the invisible hand of the market. Despite being a savant salesman, he is blind to a swirling number of ironies around him. It should come as no shock that the screenwriter was the former editor-in-chief of The Onion.

When the McDonald brothers want to buy several of his milk-shake machines, he thinks their order is a mistake, and drives down to San Bernadino, California to see what is up. He falls in love with the speed and efficiency of their burger joint and its unending line of customers. The place is less of a teen hangout and more of a 'family picnic' where people walk up to the window, take their food and go.

He is (and we are) charmed by the can-do intelligence of the two brothers as they relate the story of their failed cinema-house which turned into a hot dog stand, and eventually into McDonald's. If there is ever going to be an Academy Award for 'casting agent' then it should be handed out, tout suite, to Ronna Kress for the hang-dog charm of John Caroll Lynch and the 'basement engineer' perfectionism of Nick Offerman.

Kroc hard-sells the brothers (against both their better judgment) to allow him to take their system on the road. And the movie becomes a gently comic, but increasingly edgy, push and pull between Kroc's need for speed and expansion, and the brothers' insistence on quality. The compromise is, I suppose, the middle ground of mediocre consistency. Writer Eric Schlosser (Fast Food Nation) argued that was the true secret sauce of fast food; the comfort of it meeting (not overly lofty) expectations wherever you happen to be, at home, on the road, or abroad.

The film has a heyday with the McDonald's milkshake as a metaphor for artisanal vs. commodity. When the cost of refrigeration of ice cream is a major line-item expense, Kroc wants the whole chain to switch to soluble powder, which leads Dick McDonald to exclaim the now common refrain, "How can it be a 'milkshake' if there is no milk in it?!" If corporate fan-service is a thing, there are a lot of 'wink at the camera' in-the-know type of jokes if you are familiar with the management, and evolution of McDonald's over the last 60 years.

Kroc's lack of creative control in a system that he had no real hand in creating is eventually channeled towards a business model that he does have a hand in creating. Making the business about the 'system of setting up McDonald's restaurants,' in particular owning and controlling the land as a way of locking individual franchisees into a kind of entrepreneurial indentured servitude. It is also the great lever with which Kroc can pry the 'not dreaming big enough' McDonald brothers out of their own creation. The army of corporate lawyers and accountants that grow to enable to do this is again, familiar, but profoundly depressing. The movie keeps its positive spin in spite of everything. The Founder is a masterclass in 'positive horror.'

Kroc envisioned the Golden Arches, symbolically (iconographically?) on par with the cross of the Christian church or the flag on state and municipal buildings. There is one (or more) in every town, they are easy to find, and people attend and pay them, often. How you feel about McDonald's as an American Institution will likely shade how you feel about the film. All movies, art, whathaveyou reflect your own life experiences, but The Founder is perhaps more amplified in this regard. I mean, who would expect the director of The Blind Side and Saving Mr. Banks to make a more subtly-accessible version of There Will Be Blood?

I believe that what one might or might not get out of The Founder (in either tone or message) is highly dependent on the personal notions of what exactly McDonald's is for each viewer. There have been a number of movies, mostly documentaries, about the ubiquitous restaurant chain in the past couple decades, often focusing on the negative aspects of the business model and skeevy ethics of the large corporation. McLibel and Hot Coffee focused on various lawsuits the company has faced over the years. Super Size Me was a mainstream hit and focused on the chronic health effects of the food (and portion size) served via a grandstanding bit of showmanship.

Richard Linklater's mostly ignored and quietly excellent Fast Food Nation looked at the negative effects and issues of the franchise model from top to bottom by adapting a book on muckraking McDonald's, which, not coincidentally, had quite a significant number of pages devoted to Ray Kroc. This is a diverse, and exemplar range of movies. As specialized cinematic national past-times go, carping on the ills and soullessness of McDonald's in cathartic and novel ways is inversely analogous to baseball movies, a sport that also has fared generally well on the big screen but functions typically as an indicator of what is soulful.

There might be some debate on whether re-channelling the cornpone nature of Hollywood storytelling into deeply disturbing territory was an intentional directional choice in making The Founder, or a clueless (but happy) accident. My sense is that it was intentional, but I would argue that it does not matter as much as one thing.

The important thing is that it is up there on screen. It is likely the reason why The Weinstein Company have been bouncing around the release date of the film since August. Not because the film is a dud, but because in spite of ts hand-holding, even pandering, narrative, it is surprisingly difficult to nail down. It is less about the rise and fall of a great man in America, because Kroc never really fell, and while he was a winner, he was never, even for a minute, a hero. The Founder is introspective about what is important about America's need for constant growth, be it personal, business, or national character.

Do you feel this content is inappropriate or infringes upon your rights? Click here to report it, or see our DMCA policy.
BiopicJohn Carroll LynchJohn Lee HancockMcDonaldsMichael KeatonNick Offerman

More about The Founder