ROGUE ONE: A STAR WARS STORY Confirmed for China 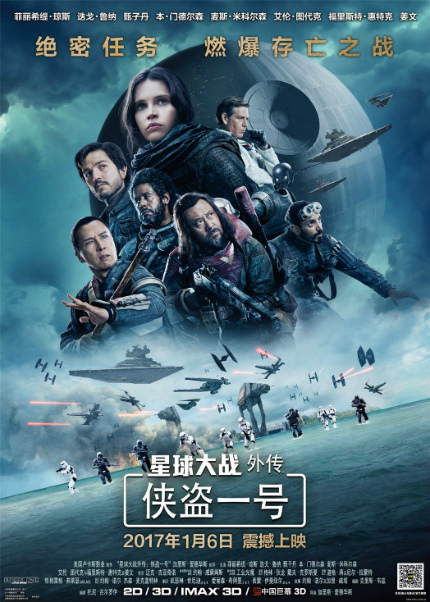 China imposes a strict limit of 34 titles per year on imported movies, so even big-budget Hollywood productions featuring Chinese stars are not guaranteed a release in the country's valued theaters.

Disney, however, has now confirmed that Rogue One: A Star Wars Story will be released in Chinese theaters. Donnie Yen and Jiang Wen lead the cast -- see the poster for visual proof -- as thieves seek to steal something that doesn't belong to them. (The movie is set a long time ago in a galaxy far, far away, so the statue of limitations on their criminal activity probably applies.)

Disney's previous space epic, Star Wars: The Force Awakens opened in China earlier this year on January 9 and grossed more than $125 million in the country, which places it at position #12 on the annual box office charts.

Rogue One will open in the world's second-largest film market on January 6, 2017.