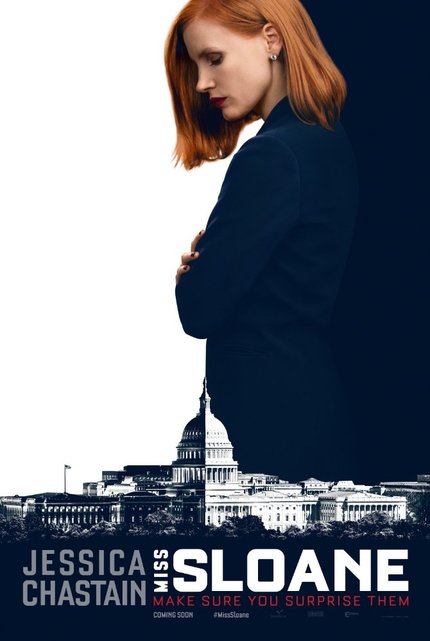 It wouldn't hurt to bone up on Washington DC lobby laws and practices before taking in Miss Sloane, the latest from one-time prestige director John Madden (Shakespeare in Love). But if doing so falls between the cracks, don't let that stop you. Rather, let the fact that it's merely good and not great be the thing that might stop you.

Miss Sloane is a generally admirable film with enough solid scenes to clear Howard Hawks’ old adage that a decent movie should have at least three good scenes. But does it complete the requirement by having no bad ones?

Set in the duplicitously toxic bubble world of the United States capitol, Miss Sloane hops from one sterile boardroom, office, television studio, and yes, lobby, to the next. Most of them unintentionally run together and prove discernible only by who's in them.

Who’s in them? A bunch of sharks in suits, that's who. Among them are Michael Stuhlbarg, Sam Waterston, and Alison Pill. The main difference between these perpetual go-getters and actual sharks is that actual sharks come up for air more often.

The queen of the sharks is one Elizabeth Sloane, a pill-popping man-whoring ('"male escorts") lobbyist on wheels. Her porcelain skin and icy eyes have run effectively frigid before the movie ever started. It's Jessica Chastain, carrying the movie in the title role as a woman obsessed with her own career, and by extension, herself. 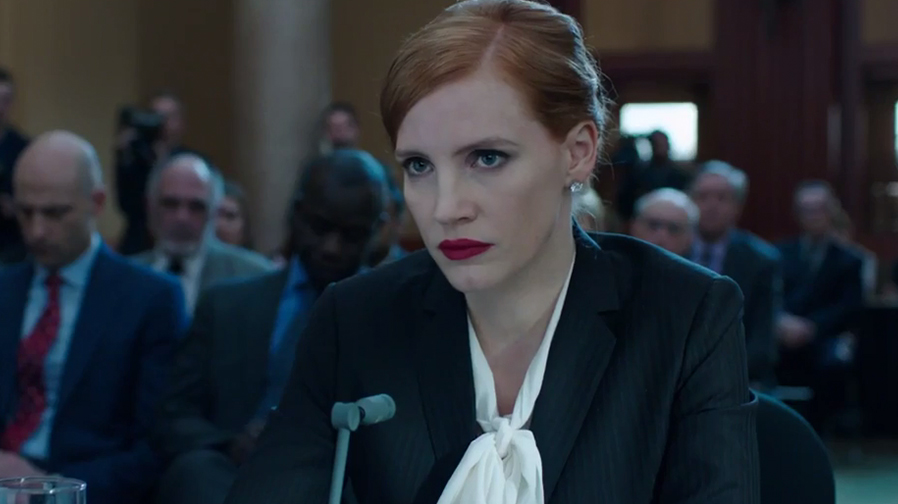 In the opening moments, Sloane sits in constraining close-up facing the camera while spouting her perpetual strategy of holding her trump card until just after her opponent's revealed theirs. Her pantsuit looks like a million bucks and her hair looks like a thousand. Her every move is calculated, her every strike self-beneficial, humorless and intimidating. The character is very good at her deplorable job, and Chastain is very good at playing her that way. She’s always one hairpin away from a cutting speech, a room-stopping analogy, or simply a scriptwriterly burn.

Where Miss Sloane, and Chastain, go momentarily astray is when they reach for levity. Wallowing in the darkness of politics, backstabbing and corruption, this is simply not a movie that wants to be funny. Yet, every now and then, we have a roomful of snarky college interns verbally sparring like Gilmore Girls. I suppose they’re here to remind us that DC’s cesspool begins with the energetic idealism of youth. The sheer artifice of their banter vaguely evokes Sloane’s own diatribes, but comedy relief this is not.

The movie exists to remind us, in this altogether twisted election year, that altruistic servitude leadership is an antiquated fossil of a notion. Making the right enemies and then meticulously plotting their downfall is where it’s at. Miss Sloane does so by picking up the ever-polarizing U.S. gun control debate.

Gugu Mbatha-Raw (2013’s Belle) is terrific as one of Sloane’s well-meaning coworkers; the rare individual with a conscious, and a secret. Of the several twists in the film, the one most centric to both the gun issue and Mbatha-Raw’s character, is the most effective. Just when it seems the film has chosen a side, it seems to aim elsewhere. It was past the two-thirds point in the running time when I sat up and said, “Now this is getting interesting!” But all too soon, it’s back to business as usual on Capitol Hill.

Miss Sloane is sleekly designed and moodily shot. The cast is a great one, and Madden can chalk this up to one of his better movies since his Miramax glory days. But it’s also not as fresh nor as clever as it thinks it is. The I-talk/you-talk tenor of the banter is soaked through with faux Sorkin-ism, and Sloane’s own revealed private character flaws aren’t enough to win us over to what should be glimpsed as her “human side”. And since when does a replay montage of the all of one supporting character’s key moments throughout the film effectively decontextualize what we were supposed to have known of that character?? It doesn’t.

But like the lobbyists, politicians, and other sharks in suits depicted, Miss Sloane isn’t above a little fast talking in the interest of its own “greater good”. Not quite a morality tale, not quite a good old cynical wallow, Miss Sloane basks in the corruption of awards baiting (why now, Transfilm, Archery Pictures, Canal+, Cine+, FilmNation, and France 2 Cinema?) and pious speech stumping. In those moments, the appeal of the film is amiss, Sloane.

Do you feel this content is inappropriate or infringes upon your rights? Click here to report it, or see our DMCA policy.
Jessica ChastainJohn MaddenMiss SloaneUnited States politics

Leftwing nonsense that will bomb big at the box office.

What does Leftwing nonsense actually mean?

There's been a bunch of Lefty movies this past year. And, yes, all of them bombed.

People are sick of being preached at (and lied to) by out-of-touch Hollywood elites. Especially after their embarrassing, hysterical shilling for Clinton this election.

Next year these celebrities who called half the country racist scum are going to have movies coming out. Let's see how that goes and if next year's summer season will be as dismal as this year.

Anything that goes against Michael's own biases.

Could you name some of those Lefty movies and some Righty ones please?
And in your opinion how many of the population are actually racist do you think?

THE BIG SHORT blamed everyone BUT the Democrats for the housing crisis.

There was that TV movie about Clarence Thomas and Anita Hill, made to demonise a great man.

TRUMBO glossed over the fact that he was a Hitler-loving communist piece of crap, not some crusader for free speech.

And while it hasn't been released yet, I'm sure uber-liberal Rob Reiner's LBJ movie will soft-pedal his destruction of the black family unit and creation of the welfare state. An actor who was on the set told stories about shooting it and it certainly seems to be the case.

As for 'right-wing' movies, there aren't many since Hollywood is entirely populated by liberals. AMERICAN SNIPER comes to mind, and it wasn't even that good and still made hundreds of millions of dollars.

I always wanted Clint Eastwood to do the definitive Joe McCarthy movie and set the record straight on this American hero. Refute the half-century of lies the Left has been telling about him.

Thanks and what are this years Righty movies?
In your estimation what percentage of the population of the US is racist?

I can't think of any right-leaning movies this year. Maybe THE ANGRY BIRDS movie, which is a sly commentary against regressive Liberal politics, the migrant crisis and globalism. Watch Stefan Molyneux's brilliant video on it.

I'm not entertaining the 'racist' question because it is ridiculous and, like most people, I'm thoroughly sick of the word.

Throwing an epithet like that at someone just proves you have no legitimate arguments to make.

Why is it ridiculous?
If you could explain this it would go some way to making your argument legitimate.
I also was not throwing the epithet at you, I also do not believe that half of the country are racist especially as just over half of the population actually voted so statistically unlikely.
So are there no movies that you would consider Righty?

If Hollywood is so overrun with "Liberals" why is it that Oliver Stone struggles to get funding from America for any of his movies?

It's still a business, and politics isn't exactly box office gold at any time..

And every single film-maker struggles to get their movies made. Even Scorsese took decades to get SILENCE made.

True but then you are talking about Neoliberals and market capitalists neither of which are Liberal at all.

...this is in a COMPLETLY in a different time zone than from you're "threaded" conversation; - not to mention different from the *above* article.. --- from correspondences + comments gone past however; you seem to have a lovely eclectic and wide ranging preference of cinema.
-----
All that long winded talk to say; I've (recently) seen a small number of film(s) that I thought any number of which might pique your Interest...
-- The Duelist
-- The Brand New Testament
-- Nocturnal Animals (jarring beginning, - but it Roars....)
-- Arrival
-- Blind (this is an EXQUISITE; albeit VERY NSFW film from 2014)
http://www.imdb.com/title/tt26...
and finally
-- Daisy Diamond.. (hails from 2007)
~ ~ ~ ~ ~
Take (any) of these; or leave them. --- any which way is Perfectly Fine.

Thank you cj you crazy diamond, for your recommendations a couple of them are on my see list.
The large number of films you have seen has me imagining you with a large head inset with a myriad of compound eye's sitting in the middle of a 360° IMAX screen broken up into multiple displays.
Your not a giant sentient spider are you?