PATRIOTS DAY Is Exploitative Hollywood at Its Worst 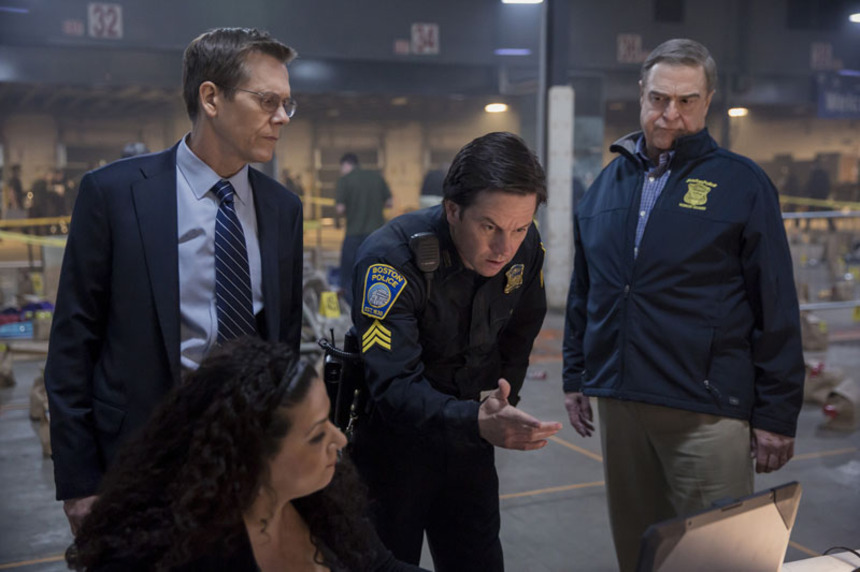 Out nationwide on January 13 (New York and LA on December 21) Patriots Day is the first big-screen adaptation of the 2013 Boston Marathon bombings carried out by the Tsarnaev brothers. Directed by Peter Berg and staring Mark Wahlberg (the two have collaborated before on both Lone Survivor and Deepwater Horizon)

I was on hand for the Boston premiere of film Patriots Day, which screened just the other night. Hours before, I was frozen in dread wondering if I really wanted to do this to myself — but for the sake of this article, I decided to go. I got nervous while waiting an hour in line in below freezing temperatures. Would there be any bomb threats? The heavy police presence comforted me somewhat on that question — but as well all know, life is full of horrific surprises.

The audience was filled with local background actors. Somewhere in the audience, Senator Elizabeth Warren and David Ortiz sat (probably not together, but who knows). I saw a few of the bombing survivors in the crowd, and for them, I hope they find something healing in this film. There were also an extraordinary amount of the city’s rich denizens — marked by their skyrocket heels, designer threads, plastic surgery enhancements, and in some cases — utterly tasteless, plunging necklines. I’m not one to tell other women how to dress, but in light of the subject matter, everything felt so gross.

Pre-screening, the Boston Police Pipes & Drums corps put on a show. Then Berg and Wahlberg come out onstage and talk about how the film is dedicated to the first responders, survivors, and the city and people of Boston. They discuss that they are humble. Later, after the screening, they interrupt the credits (during which a Dropkick Murphys song reportedly plays) to come say hello, and thank you, and “I’ll see you at the party.” No. No, you won’t.

As for the film itself, I’ll start with the positive: the score by Trent Reznor and Atticus Ross is fantastic. Their scores always are, but they usually work on less in-your-face Hollywood productions, so I was scratching my head as to why they choose this particular project. There are some scenes that work really well and offer a good dose of suspense, like the scene where Dun Meng (played by Jimmy O. Yang) escapes from the terrorists after they’ve carjacked him. Meng is one of the real heroes of this travesty, and if nothing else, the film portrays what he did in a fantastic way. He managed to escape a horrific situation and alerted police, who eventually caught these bastards. Additionally, Patriots Day didn’t feel a need to over-explain the motives of the Tsarnaevs or give them sympathetic backstories.

The other scene that really stuck with me is the officer who had to stand guard over the sheet-clad body of eight-year-old Martin Richards on Boylston Street — for HOURS until the authorities gathered the evidence. And when the boy was finally loaded into an ambulance and taken away, the officer saluted him. It was utterly heartbreaking.

The negative: Patriots Day is a wildly uneven film that feels like a TV movie of the week — with A-list guest stars and a ridiculous overabundance of handheld techniques and aerial shots. Two is enough, but I lost count of them close to half a dozen or so. And that’s nothing to say of the Watertown aerial shots taken of the city just a few months ago — which were done against resident permission and more than once — including helicopters shooting footage at six a.m.

At the end of the narrative film, there’s a vignette of some of the survivors featured in the film, whose actor counterparts were trotted out in Patriots Day before shit hits the fan — just long enough to show them in day-to-day life before the gory aftermath — and emergency room scenes announcing that amputation is needed. This felt exploitative and thin — slapped together to manipulate emotions. The absence of survivor Jeff Bauman and hero Carlos Arredondo — because we can’t get ourselves or our audience confused with that other adaptation of the events.

There are actual broadcasts, photos, and security footage of the real bombers interspersed in the re-enactments, too. I’m torn on how I feel about this; it’s chilling. But is it exploitative? I can’t decide, maybe because I’m just too traumatized. After I leave the theatre, I’m handed a flyer with a code for 10% off of a “documentary play” based on the bombings that I can look forward to in March. Words fail me. Everyone is getting on the fucking bandwagon.

But back to the film. Mark Wahlberg plays the fictional Sergeant Tommy Saunders, who’s the “ONE MAN!” who can save the world and solve the crimes. Of course, there are other people who do quite a bit to help the survivors and catch the bad guys, but Patriots Day is mostly focused on Wahlberg.

However, the most confounding thing about this film is how many scenes were played for laughs. You can say that it’s to lighten up the situation — but how appropriate is it to lighten up a film about events that maimed and killed people — and traumatized a city and a nation?? Jokes before the bombings — fine. But in the midst of the Watertown shoot out? Are you kidding me?? Stop. FULL. STOP. There are so many layers of wrong here.

I'd like to hear what you think about this film. Am I being too sensitive, or is this just a vile, exploitative piece of revisionist filmmaking? Weigh in on the comments!

Do you feel this content is inappropriate or infringes upon your rights? Click here to report it, or see our DMCA policy.
Mark WahlbergPatriots DayPeter Berg