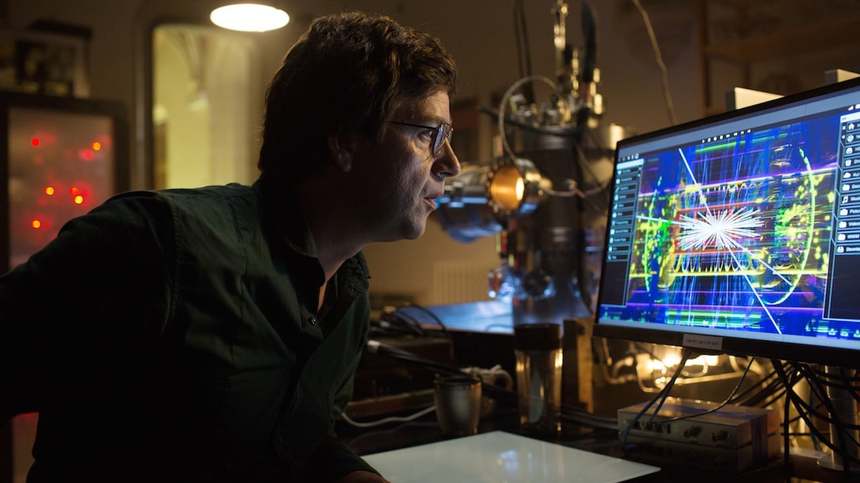 It is no new theme of time travel in science fiction, that attempts to change the past for what one considers the better, often ends up making things worse. Even if the desire is just to make one simple change, subtle manipulation can have drastic consequences, and further attempts at change can mess up everything. Such is the premise of Belgian director Lukas Bossuyt's feature debut Sum of Histories. A film more in the popular than art house cinema category, it doesn't tread any new ground, but it's an enjoyable story with good performances that keeps its tale tight, to the point, and displays some good futuristic technology.

Viktor (Koen de Graeve) and Theo (Robrecht Vanden Thoren) have invented a software program that, in theory, can send emails into the past. They test this theory with a young man, Tom (Matteo Simoni), 25 years before them, who is going to die and therefore, for them, is a no-risk factor for making a small change. However, distressed over his wife Lena (Karina Smulders) and her paralysis, Viktor decides to send one more email, altering the future of all involved.

A single email changing the past in a drastic way puts us in the realm of 'the butterfly effect', but Bossuyt takes care to see that it is only one or two things that are changed; even if those things might seem dramatic to those affected. How do we really know with whom we are 'meant' to be? Who is one person to decide what is best for another, even if it seems obvious (such as making sure someone isn't paralyzed for life)? It stands to reason that any of us, given knowledge that we could have something we wanted in another timeline, might try to change it, regardless of the consequences, but Bossuyt and his actors make clear the subtle changes in character that make such decisions possible.

While arguably aimed at a more general audience, this doesn't mean the film overindulges in the technical side of time-travel; rather just enough is given for the premise to be plausible. The technology is updated from our own, but still recognizable; no one steps into a weird machine, instead a computer is used to reach to the past; this keeps the story in synch with what someone in the audience could see themselves doing, or not, in order to manipulate the past. The actors pull off their subtle changes in character according to how that past has changed seamlessly, and while the ending might be a bit too perfect in the result of time-travel chaos, it's in keeping with the theme.

Sum of Histories might not win any awards for originality, but its execution is tight and to the point, and its actors solid. It's a familiar yet enjoyable story, one that sees how human error can lead to human cost, but finds its way back to optimism.

Do you feel this content is inappropriate or infringes upon your rights? Click here to report it, or see our DMCA policy.
Koen De GraeveLukas BossuytRobrecht Vanden ThorenSum of HistoriesTrieste Science+Fiction Festival

More about Sum of Histories