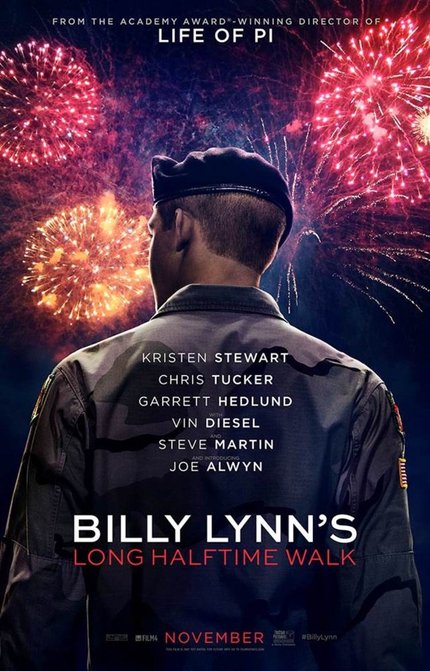 No, this isn’t a movie about someone who’s had too much to drink in the first half, and then has trouble locating a restroom during the break. Although that may’ve been a better film.

As we're now two years beyond the surprisingly massive success of Clint Eastwood's American Sniper, it’s only natural that we'd be getting a deployment of obligatory imitators. Chief among these newfangled cinematic salutes to military martyrdom are this film, and Mel Gibson's Hacksaw Ridge. While that movie is said to be Gibson at his effectively goriest in quite some time, this film opts to riff on the home front stigmatization angle.

Joe Alwyn, a fresh-faced newbie, plays war hero Billy Lynn, a decorated young soldier whom, in flashbacks, heroically acts to save his valiant superior (Vin Diesel) on the Iraq battlefield. For his trouble, he and his close-knit unit now (circa 2005) must face being honored during a Very Special Halftime Show during a Very Big Thanksgiving Pro Football Game. This is the entire movie.

With its PTSD-triggering fireworks and other pyrotechnics, the patriotic display sends Lynn into an array of painful battlefield memories. As Destiny's Child performs around Lynn and company, the fact that they're merely being exploited becomes increasingly apparent. (No, it's not really Destiny's Child. Shot more from behind than if it really were the singers, this film doesn't show Beyoncé the way Ben-Hur doesn't show Jesus).

A well-intentioned showbiz agent (Chris Tucker) wheels and deals with a prominent windbag of a wealthy businessman, played distractingly by Steve Martin. "If this movie deal goes through, everyone will be rich!!" It’s some sort of commentary on war as entertainment and/or the exploitation of our servicemen and women, culminating in a talky showdown in a posh stadium V.I.P. area. Before it's all over, someone's getting a piece of someone's mind, maybe. 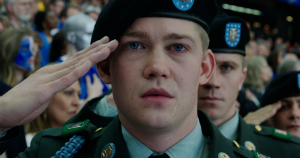 Despite all the hoopla over this film's pioneering technical bells and whistles, it turns out that it's only playing in the U.S. in it's supposedly groundbreaking 120 frames-per-second 3D format in New York City and Los Angeles. Hence, the version reviewed here is the standard issue 24 fps 2D version. However likely it is that we've been spared a technologically-induced headache, that unpleasantry is made up for in quantity of sheer boredom.

Director Lee does his darnedest to break it up with uncomfortable leering shots of cheerleaders' rear ends, because, hey! This is the guys' POV. And you know, boys will be boys...! But even with Lynn's infatuated longing for a particular cheerleader (Makenzie Leigh) whom he's become quickly infatuated with (and she with him), the cheap influx of skinny pretty girls is to no avail.

Early in the football game, the image of Lynn and his battalion appear on the stadium’s big screen as part of an early salute. It’s a reverent little moment, but just so. Then, moment’s over, and it cuts to an erectile dysfunction ad. Apropos not just in the plight of the soldier’s themselves, but also the film itself, and its glaring inability to ever get it up without the 120 fps viagra that was apparently such a vital aspect of Lee’s vision.

So, what’s the story of the film, anyway? Essentially, it’s this: To paraphrase The Clash, will he stay or will he go now? Like so many stories of soldiers who’ve come back home, Billy Lynn must decide if he can live without war in his life. The inner need to go back pangs at him, even as his well-meaning sister (Kristen Stewart, wasted in the part) has found him a likely honorable exclusion from further service. I

f he stays, it’s for the daydream of white picket fences, a perfect home in the suburbs, and forever hot sex with the cheerleader he just met whom he'll surely wed. If he goes, it’s out of obligated duty to country and brotherhood. Different films have different ways of spinning this decision. This one is no exception. Just don’t expect the level of thoughtful spinning experienced in, say, The Hurt Locker or American Sniper.

Despite the total failure of Billy Lynn's Loooooooooong Halftime Walk, Lee's commitment to pushing filmmaking technical advancements for the sake of true cinematic art remains commendable. With 2003's underrated Hulk and 2012's Life of Pi -- this critic's pick for top film of that year -- his track record in this area remains more impressive than not.

Billy Lynn’s Loooooooooooooooooong Halftime Walk does manage the bare minimum, which is reverence for the troops. It’s not sure how critical to be of the war they were fighting, or their inherent boys-will-be-boys demeanor, but at least their humanity and service isn’t thrown under the bus.  Yet, in the attempt to recapture American Sniper's lightning in a bottle, Lee has instead evoked Eastwood's other semi-recent military service drama, the blah Flags of Our Fathers. That film was more than enough of returning soldiers feeling self conscious in a sports stadium, thank you very much.

If you do find yourself at this movie with a large drink and wondering when to take that necessary walk, rest assumed that the whole film is one long halftime.

The film is now playing in New York and Los Angeles. It expands to theaters throughout the U.S. on Friday, November 18.

Do you feel this content is inappropriate or infringes upon your rights? Click here to report it, or see our DMCA policy.
Ang LeeBilly Lynn's Long Halftime WalkChris TuckerJoe Alwynmilitary serviceSteve MartinVin Diesel