Review: ALLIED, In the Territory Between Tribute and Parody

A ripe potboiler, Allied resembles countless World War II motion pictures, yet its intended tone is difficult to discern. Is it meant as a tribute? Or a parody?

The answer lies somewhere between the two, obviously, for a movie that includes a childbirth scene -- outdoors, at night -- as London is bombed by the Nazis and an orchestral score soars. The exploding bombs light up the skies like fireworks! The actors look glamorous! How could anyone take that seriously?

Director Robert Zemeckis has been mapping the territory between sincerity and cynicism for much of his career. His first two films, I Wanna Hold Your Hand and Used Cars, flopped neatly from one extreme to the other, a pattern that has trailed him for years, suggesting that Zemeckis is comfortable with embracing whichever perspective is best for the story, whether heedlessly joyful (Romancing the Stone, Back to the Future) or needlessly painful (Back to the Future Park II, Death Becomes Her).

His turning point was not the bilious and preachy Forest Gump but the followup, Contact, which showed that Zemeckis was capable of wrestling with existential questions while still delivering an entertaining trip. After the light and dark contrasts of Castaway and What Lies Beneath, he sidetracked himself with his experimental trilogy (The Polar Express, Beowulf, A Christmas Carol) before returning to the straight dramatics of Flight and the pure nostalgia of The Walk.

Taking place before the events in Who Framed Roger Rabbit (Los Angeles in the late 1940's), Allied feels like a spiritual prequel to Zemeckis' 1988 comedy that was a tribute both to film noir and to animated pictures. Allied is infused with a modern sensibility, not only the easy trappings of profanity, bloody violence and drug use, but a certain weary familiarity. 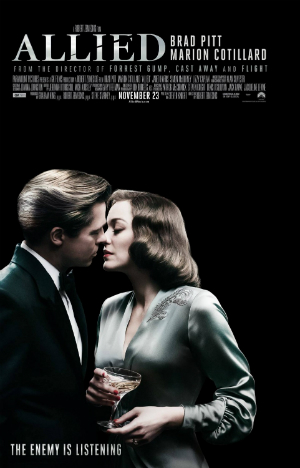 Zemeckis and Bob Gale wrote the screenplay for Steven Spielberg's 1941, which tried far too hard to make light of the era. With the passage of 35 years, and an original screenplay by Steven Knight (Peaky Blinders), Allied straddles a line between comedy and drama, ending up with flabby melodrama.

In 1942, Max Vatan (Brad Pitt) is a Canadian intelligence officer who parachutes into North Africa so he can join a mission set up by French Resistance fighter Marianne Beausejour (Marion Cotillard) in Casablanca (?!). The location immediately brings to mind complicity and duplicity and, indeed, their mission is to kill a high-ranking, visiting Nazi. But Max and Marianne are too good-looking to imagine that they won't fall in love, and so they do, and end up in London, where, one year later, they have a baby and a happy life. Then, accusations arise about loyalty, and their love is put to the test.

Knight is a very good and prolific writer; his credits include Eastern Promises and Locke, which he also directed. Somewhere between the page and screen, however, whatever purity the movie might have had went awry.

Pitt was very effective in a straight dramatic role as a tank commander in David Ayer's Fury, but his performance here is more reminiscent of what he did in Quentin Tarantino's Inglourious Basterds, only without the sardonic sense of humor. He's called upon first to be routinely heroic and romantic, where he fares well, but then to plunge deep into a pool of crisis, where he struggles, especially opposite Cotillard. She may have a more narrow range of emotions to play, yet she does so elegantly and expertly.

The tonal changes throughout the movie waver and wander, leaving one to wonder if Allied wouldn't have been easier to accept if it was made in black and white and released in 1947. As it is, it's a b-movie dressed up in high-quality gear and left to fend for itself in the wilderness.

The film opens in theaters throughout North America on Wednesday, November 23.

Do you feel this content is inappropriate or infringes upon your rights? Click here to report it, or see our DMCA policy.
Brad PittMarion CotillardRobert ZemeckisWorld War II