Trieste 2016 Review: THE OPEN, Sport at the End of the World 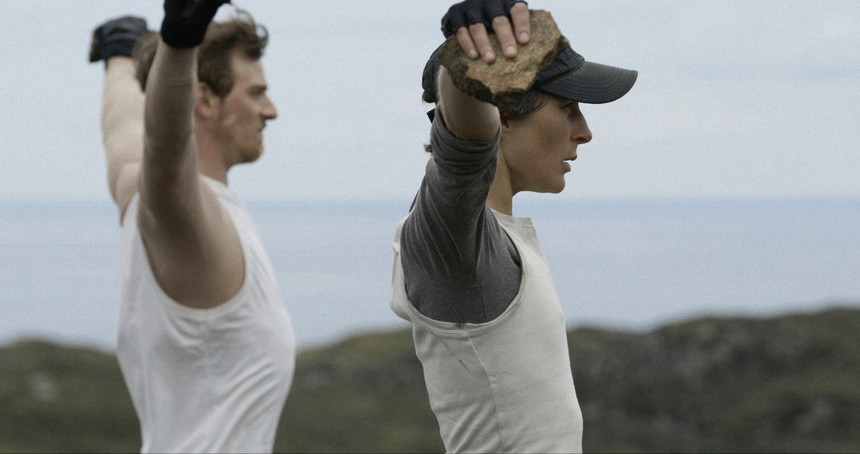 What if your life's dream, a goal you had been working years to achieve, was suddenly made impossible by, say, the end of civilization as we know it? What if a global war meant that any semblance of your old life disappeared? How would you live out, day to day, if your crushed dream was the only piece of sanity you could cling to? Marc Lahore's post-apocalyptic drama The Open looks at the lives of three people, clinging to a shred of their former lives even as the war planes fly above them. A quiet, understated drama, it follows in a line of recent science fiction films such as Into the Forest and Embers that eschew the technological and focus on the introspective, human aspect of the unknown future.

Stéphanie (Maia Levasseur-Costil) is a top-ranked tennis player about to play at the French Open, where she is anticipated to win. But just a few days before, the world erupts into war. Cut to months later, and she and her coach André (Pierre Benoist) have captured a British soldier, Ralph (James Northcote), who was a low-ranked tennis player in his pre-war life. They convince him to participate in their reenactment of the Open, except without tennis balls and using racquets without strings.

They live this bizarre daily existence, working towards the 'Open' without fanfare while trying to stay alive. Survival is difficult, but not impossible, so even though supplies and comfort are minimal, Stéphanie and Ralph spend their days training. After all, what else is there to do? Stéphanie, who should have had her chance, keeps her singular yet not maddeningly obsessive focus on her game (much as she must have done before). Ralph, at first reluctant to join this absurd pair, relents and finds himself with the same focus, even as it becomes more difficult for Stéphanie. Lahore slowly eases out this switch from obsession to breakdown, and vice versa, as Ralph and Stéphanie form a bond that, if the world was as it had been, might never have been created.

The sight of two people in their whites, engaged in a warped form of this high-class sport, in a beautiful yet barren and void landscape, would make any stranger that came upon them laugh. But what else would humans do with so much time on their hands? There is no place to escape to, no corner of safety; nor is there any hope that, in the foreseeable future at least, that things will return to any semblance of normal. And the goal of recreating the famous tennis tournament must have an end once the tournament is 'finished'; what then?

If your immediate needs for survival (basic shelter and food) were met, and you avoided conflict, what would you do with the hours between? Lahore strips the story of all unnecessary backdrop, with only the sounds of sights of tennis that Stéphanie projects onto her existence (with the sounds of gunfire, for her, becoming the sound of racquets hitting tennis balls). This creates a space for the audience to be be a part of her and Ralph's existence; as absurd as it might seem at first, the minimalist aesthetic allows that room to think on how the human mind and soul would function under such strange circumstances.

The Open is a slightly surreal, and ultimately very moving and thought-provoking drama about the things that humans do in order to keep their sanity in the most extreme and terrible of circumstances. Methodical and deliberate, it finds space and time to ask the deepest questions of how the mind and heart function, against a backdrop of physical endurance.

Do you feel this content is inappropriate or infringes upon your rights? Click here to report it, or see our DMCA policy.
James NorthcoteMaia Levasseur-CostilMarc LahorePierre BenoistThe OpenTrieste Science+Fiction Festival