Holy Shit! In KONG: SKULL ISLAND, The Ape Is Just The Beginning. 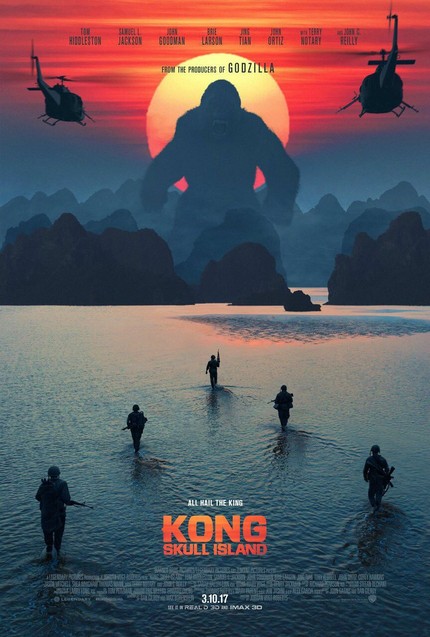 There has been a lot of talk about the melding of worlds between Kong and fellow Legendary Pictures products Godzilla and Pacific Rim, and this trailer definitely builds a solid basis for confirmation of that idea. While Pacific Rim has hit numerous snags in the development of its sequel, currently on the backburner, a sequel to Godzilla has been in continuous production ever since the release of Gareth Edwards 2014 film. The film has gained and lost key crew, including directors, but there doesn't seem to have been any question that Big G would return in his new American incarnation.

Kong: Skull Island, however, is somewhat its own beast, so to speak. The film seems to disregard all previous Kong films in terms of direct lineage and instead seeks to reboot the Kong concept as the beginning of a larger world of gods and monsters on Skull Island. The new Kong is bigger, MUCH bigger, than any previous incarnation but seems to inhabit the same space as Willis O'Brien and Peter Jackson's versions did, just with a new direction. Legendary is most definitely swinging for the franchise fences with this film, and every bit of additional footage they show gets me more excited.

This time around we are treated not only to Kong, massive as he is, but also additional creepy crawlies as well as an extended peek at the role that John C. Reilly will play in the film. Reilly appears to be something like Dennis Hopper's character in Apocalypse Now, an outside observer who is able to translate this crazy, brave new world to researchers and soliders played by Samuel L Jackson, Tom Hiddleston, Brie Larson, John Goodman, and more. However, as impressive as this cast is, it's the man behind the camera that have me most excited.

Directing Kong: Skull Island is indie darling Jordan Vogt-Roberts, who sprung to the attention of the arthouse crowd with his amazingly charming adolescent comedy, Kings of Summer in 2013. Vogt-Roberts is certainly an unlikely choice for a monster movie based on his past credits, but his ability to create a sense of real community between his performers is quite impressive, and on a film with a cast like this, that skill is going to be very crucial.

But enough about that, let's get on with the giant fucking monsters! Enjoy the latest trailer for Kong: Skull Island, I know I sure as hell did!

Do you feel this content is inappropriate or infringes upon your rights? Click here to report it, or see our DMCA policy.
Brie LarsonKing KongKong Skull IslandTom Hiddleston