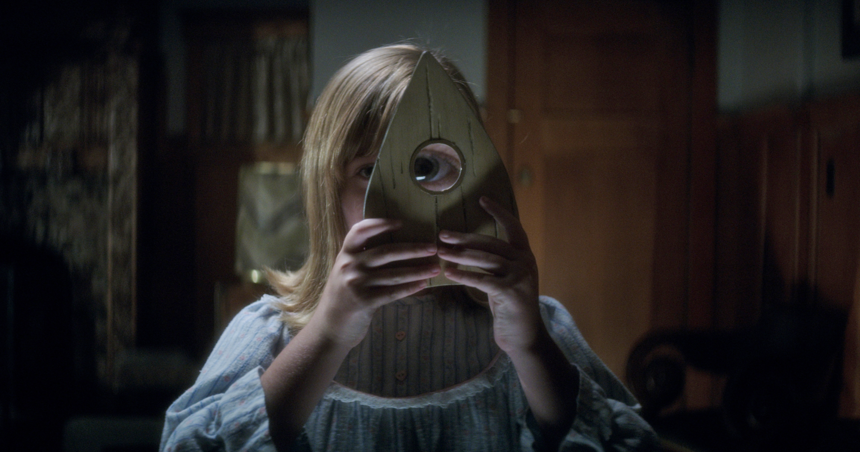 Costume designer Lynn Falconer has many credits under her fashionable brown leather belt, having worked on such movies as Oculus, Straw Dogs, Before I Wake, The Alphabet Killer and Silent House. Lynn’s latest film, currently still in theaters, Ouija: Origin of Evil presented a new challenge though, as she was given the task of recreating the style of characters living in Los Angeles in 1967. To do this as authentically as possible, while adding her own flare, she visited numerous costume houses, estate sales and flea markets choosing to go down the more classic avenue rather than florals, which didn’t fit the dark vibe of the film. She also drew on inspiration from her own childhood, picking pieces she wore during that time. We spoke with Lynn in more detail about working on the film, read the full interview below.

-With Ouija: Origin of Evil did you feel there was any place, clothes wise, you couldn’t go to?

I guess we tried to keep the 60's more laid back and natural, and less the big hair (and unfortunate eyewear that seemed to be prevalent back then!). I also concentrated on those silhouettes that were classic and inherently spooky. So, even though psychedelic florals were a possibility, I didn't think these types of fashions were very spooky.

-Ouija takes place in the 1960s. Was there any unexpected challenges that arose for you while working on this film because of the time period?

The biggest challenge was working in LA on a tight prep time frame: as well, it seemed like there were several other 60's period films and TV projects looking for the same thing last fall! The costume houses had great stuff, but I really had to be resourceful because things felt "picked clean" ---For instance, I had a hard time finding good pedal pushers in decent sizes for some reason. I ended up back up in Northern California flea markets and stores, and tons of estate sales to make up the difference--I also just wanted to find more unique items that fell into that later 67/68 part of the decade.

-Whenever you were on the set of Ouija, did anything ever happen that creeped you out? (Since the film is all about talking to people on the other side)

The special effects costume (I did not design that one) for the ghouls looked extremely itchy and claustrophobic. I was just concerned for the actor inside it!! The house we shot in also had an energy that I couldn't shake off or explain.

-How did this job differ from other projects you have worked on?

Well, doing a complete period era is something that I have done before a few times, but being able to concentrate on my favorite era (late 60's to early 70's) was a real treat.

-What story did you want to tell through the Ouija costumes?

Since Ouija boards are from my childhood, I think I really went into my memory as a child quite frankly. I picked some pieces that I know I wore when I was Doris' age--such as the crochet vest outfit that she wears—totally me sans the blond hair. But mostly I wanted their clothing to reflect the interior of the characters—by choosing pieces that would mirror what was happening in their minds.

-Which was more fun for you to dress, the kids in the film or Alice?

Hmmm, tough question. I approached all three of the Zander clan as a whole, as if they were one conglomerate, so I don't believe I had a shift in preference at all.

-Besides director Mike Flanagan, what keeps attracting you to horror films? (Lynn has worked on Oculus, Straw Dogs, Before I Wake & Silent House)

Well, to be honest I'm more attracted to Flanagan’s projects than horror itself. I don't believe that is my favorite genre,(although I do have several horror films that I love dearly) and until I worked with him, I had actually worked on more dramas and romantic comedies than horror! But I also have to say that I look at each project individually and the craft that can be given in terms of the wardrobe, and I choose with that criteria more than the genre itself. I don't want to be boxed into just one genre, because I can do pretty much anything, and I have a ton of experience with all the above.

-What has been the most challenging project you have ever worked on and why?

Salvation Boulevard. It was an amazing script and I love the director George Ratliff. But I think that his original story got messed with, if you know what I mean. When I watched it I was annoyed for all of us who bled making it. For the wardrobe challenges, we had a star heavy cast and a shoestring budget—plus it all had to be procured in Michigan because of the film tax incentive there. None of the actors were a nightmare in particular, and it was a great experience, but the sum of all of them made my job really difficult. We only had 7 million dollars for the film, but the low budget does not mean that the culture some actors are accustomed to— goes away. In the end, all of them were extremely happy, but my state of mind was the sacrificial lamb. I lost 25 pounds on that one!!!

Do you feel this content is inappropriate or infringes upon your rights? Click here to report it, or see our DMCA policy.
costume designerhorrorlynn falconeroculusouija: origin of evil