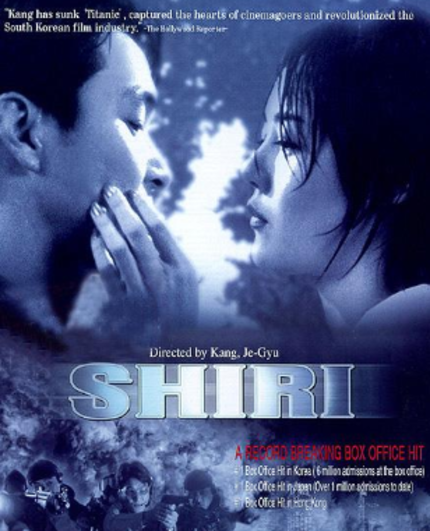 Movies with war, political and society differences can be difficult to avoid being a propaganda movie instead of being just an ordinary movie. But there are a few movies that actually succeeded to get away from the propaganda stamp such as the French American movie "Enemy At The Gates", the Chinese movie "The Resistance" and this 1998 South Korean movie "Shiri" that is about the conflict between North and South. Shiri is a terrorist and spy from the North and has landed on Seoul to give the South a living hell, what she finds is different from her own world...

In 1950 after the end of WWII the Korean state was split into two countries, the communist North and the democratic South, since the 50s the two nations has been at a devastating relationship between them and still today the uneasy tension continues.  North Korea in 1992, a special terrorist squad is trained on living prisoners for a gruesome mission, a young girl with the code name Shiri (Park Eun Sook) is the best and ruthless assassin in her class, she is transferred to Seoul as a spy. In 1996 some horrible murder occurred in Seoul and the investigators Jong (Sak Kyu Han) and Jang (Kang Ho Song) has only one clue, and that is the murders are made by one girl named Shiri but she keep getting away and her face is changing constantly. 1998 the national soccer team of South Korea is having a friendly match against the North Korean national soccer team for a peaceful reunion, however the investigators Jong and Jang must find Shiri before she cause any trouble. Meanwhile Jongs planning a marriage with his fiancée Myung (Yunjin Kim) who is a happy woman and work in a fish shop. But after Jong survives three assassinate attempt by Shiri, Myung start acting suspiciously, out of nowhere she becomes alcoholic, could she be involved with Shiri?

Shiri was the first Korean worldwide blockbuster and put South Korea into the international fame, and several movies from Korea has been very strong in the blockbuster marketing such as "Oldboy", "Natural City", "R2B", "The Tower", "The Man From Nowhere" and "Handmaiden". In Shiris case the movie is a typical action movie with same level as any action movie but with the only difference is this action movie has story and why things are happening. And I'm most I'm most impressed that the movie is very careful of revealing too much of the conflict between the North and South. But however it's not perfect movie, my complaint is why is it focusing too much on the action and too little on the plot, the script is very interesting about the conflict between North and South but the mood is very much action movie, but it feels like it could have been better as a thriller or a drama. But compared with other action movies from that time and today, Shiri is probably the best action movie it has a story that it should have developed more, but unlike other action movies, it has a story, so it's a good action movie overall with a strong soundtrack with it.

I reward Shiri, the terrorist from the North with 7.3 out of 10!

Do you feel this content is inappropriate or infringes upon your rights? Click here to report it, or see our DMCA policy.
actionForbidden loveNorth KoreaSouth KoreaspyTerroristwar