A new film by Zacharias Kunuk explores Nunavut, home to the Inuit people. 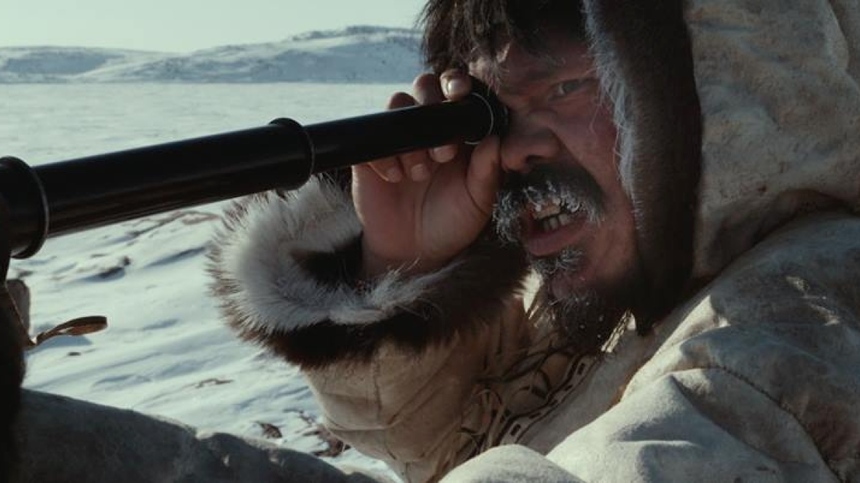 Maliglutit, the latest film by Zacharias Kunuk (The Fast Runner), is essentially a spiritual remake of John Ford's seminal Western classic, The Searchers. This time, the action is set entirely in Nunavut, Canada's most sparsely populated territory and home to what is perhaps North America's least-understood indigenous group, the Inuit people.

The film takes place on an expansive -- at times seemingly limitless -- tundra, dotted every few kilometers with igloos and dogsleds. The time- period of the film is unclear, though the characters brandish what appear to be early-to-mid-century firearms, confirming that it must take place post-contact. Still, Kunuk does not opt to mirror John Wayne's savage Indian foes with white ones in his movie. The violence and kidnapping in Maliglutit is instead perpetrated by Inuits from another tribe. This choice depoliticizes the film to a certain extent, which seems to be fine with Kunuk, who spent much of the after-film Q&A stressing that he wanted to make his own Western-style yarn, free of cultural obligation and political commentary.

The original The Searchers is indisputably laden with racist comments and ideals. It is a story told almost entirely from the vantage point of white settlers who loathe the Indians they're pursuing, and it's understandable to hope that Kunuk would bite back with a reversal from an aboriginal perspective. At the same time, it's unfair to impose revisionist wishes onto him -- and reviewing a film for what you wish it was, rather than what it actually is, always proves to be a dubious practice. This review will not be doing that.

As a Western (for lack of a more setting-appropriate term), Maliglutit nails the sense of both constant struggle and limitless possibility. Though the characters are natives rather than homesteaders, they live off the land and brave the elements in a very Ford-esque manner. Their lives are simple by necessity -- they hunt, they cook, they talk, make love and sleep. When food is scarce they pray to spirit gods to guide them to their next catch. As with Kunuk's previous work, all of the action is gorgeously filmed in graceful wide-angles that capture the breathtaking scope of the landscape.

When a father and son leave in search of caribou, their remaining family members and their camp are ravaged by surly, rapacious foes who kill everyone but the wife and daughter of our hero, the mother and sister of his son, whom they kidnap. This sets in motion the mythical 'search,' which in this case is facilitated via dogsled rather than horseback. Our father-son duo lurches steadily, if not swiftly, behind the captors, with only two bullets to their name.

Given the dogsled pace, Maliglutit creates a strange kind of suspense. It's a slow uncertainty wherein the concern is not that our heroes will be shot or trapped, but that the huskies will stop in protest and allow the foes to take an insurmountable lead. The on-foot chase scenes feel equally antithetical, as the women futilely attempt to shuffle away in animal-skin coats that probably weigh nearly as much as they do. Bursts of violence aside, this is an enchantingly stilted revenge tale that weaves the pace of remote tundra life into its DNA, and proves a wholly unique experience because of it.