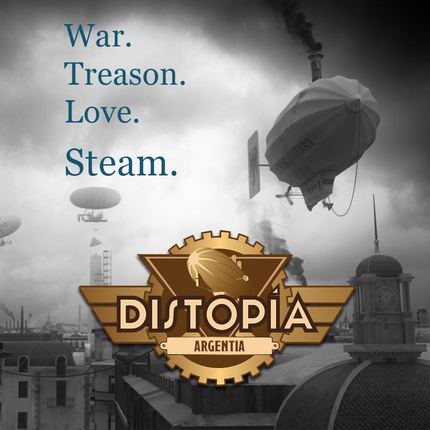 Hi, people at Screenanarchy!
Here is a brief description of our show:

Martin A. Cruz and Guillermo H. Tellechea, two independent film-makers from Buenos Aires, Argentina, are filming "DISTOPÍA: Argentia", the first Latin American Steampunk 6-episode webseries, aiming to set a new standard in webseries quality in the region due to its high-quality visual assets as for the plot, envolving local historical events.

The plot, set in an alternate South America at war in the beginning of the 20th century, follows the story of Mariscal Bandervere, a sullen Airship Captain and war hero who is called back to action to travel to the southern extreme of the world and destroy a mysterious device that is devastating the land. While travelling south onboard his warship “Argentia”, Bandervere will confront old enemies, find everlasting romance and face new challenges.

“DISTOPÍA: Argentia” will hit the web in early Spring 2017 on his YouTube channel: Distopia Saga.
Our IndieGoGo crowdfunding campaign is already on the run at www.distopiasaga.com

Thanks for your support!