Review: THE GIRL ON THE TRAIN, A Manipulative Wreck 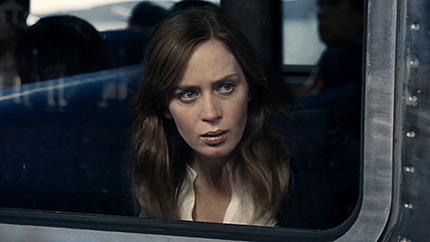 Evoking its title, the new film adaptation of the popular Paula Hawkins novel The Girl on the Train wants to be perceived as running smoothly on its tracks through a variety of settings and scenarios. Sometimes, it travels a familiar path already taken, with different details made apparent. Yet, all the while, there are bumps, slowdowns, and unwanted stops. It is, after all, still a train ride.

As the film version of The Girl on the Train chugs along on its story tracks, it becomes apparent that something isn't right. Not the details of the very wrong things that happen in the story itself, of which there are many. No, the greatest wrong turn this Train takes is in the way it exists primarily to shamelessly cultivate audience bloodlust, particularly in female viewers.

Between the inner-mind probing and experiences of three central women, played by Emily Blunt, Haley Bennett, and Rebecca Ferguson, no broad female fear is left unmined. Among them are marginalization, dependence (both emotionally and chemically), the worst kind of mothering failures, marital infidelity (both being cheated on and being a party to cheating), and powerlessness. All that's missing by the end is Donald Trump being elected president. 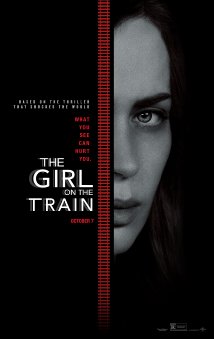 It all converges into a self-important, heavy-handed, overly polished potboiler that doesn't begin to realize it's (heaven forbid) a horror movie. Through it all, as The Girl on the Train fails to know itself yet insists on oversharing (lest we not know every last piercing, pertinent detail of the three women's recent pasts), there's a sluggish ugliness about the film.

Emily Blunt plays Rachel, the Girl of the title who makes a lengthy daily commute to Manhattan from the outer areas of New York City. In a nearly insufferable, unpoetic opening voiceover sequence, we learn about her fixation with the residents of a nice two story home which the train passes each day. The young couple who live there are smolderingly sexy, often cuddling or groping on the balcony as the train zips by. Soon enough, we come to learn the source of Rachel's obsession with these people.

Blunt, who is usually terrific, is merely passable here, her character sleepy eyed and dreary the entire time. As a self loathing alcoholic prone to black outs, she's unsure of herself or what she thinks she's seen. Which, in the context of this crime thriller, sounds more interesting than it is. We're supposed to be wondering if she's merely a woman wronged or is she actually a murderer. Most of the time, I was wondering if this character would ever wake up, thus giving the movie a surge. Momentary tension, yes. But lasting surge, no. Blunt does what she can with this unlikely leading role, but it is simply not an awards-worthy performance.

Traveling that avenue, it must be pointed out that it's comparative newcomer Haley Bennett (The Magnificent Seven), a multifaceted presence throughout, who has all the really heavy lifting. If The Girl on the Train excels at anything, it's the handling of her character. Bennett's Megan is alternately sexualized, humanized, victimized, and vilified before finally being devoured and utilized by the screenplay, written by Erin Cressida Wilson (Secretary, Chloe). 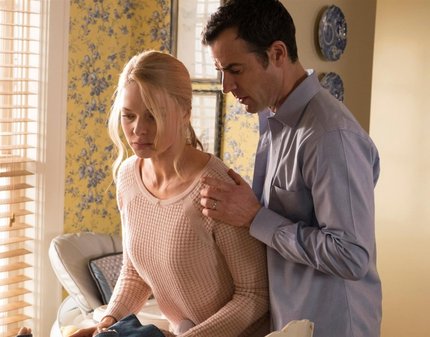 The third leg of this deceptively unsteady table is a blonde and able Rebecca Ferguson, the versatile actress who stole Mission: Impossible - Rogue Nation from Tom Cruise. Ferguson plays young mom Anna, now married to a significant man from Rachel's past. The marriage has reason to be strained, but the question of whether the straining should come as a surprise, or is above and beyond the perseverance level of most any marriage is an intended question. Megan is their nanny who quickly finds reason to quit working for them.

Tate Taylor, who previously directed The Help and the James Brown biopic Get On Up, now has yet another overbearing film on his resume. One can imagine this white male filmmaker reaching around to pat himself on the back for crafting such a probing and relevant examination of the contemporary female psyche. One wonders if that spot is still raw from when he was doing the same thing for making The Help, a slightly superior but nonetheless also over-wrought film.

Taylor, hailing from an acting background, is skilled at casting the right people, often steering them to awards-worthy performances. While the women of the cast all stand out in their varied ways, the men don't fare so well. There are three men in the film, played by the usually compelling Justin Theroux, Luke Evans, and Edgar Ramirez. Squint even a little, and they all three physically blend into the same person. Never mind who among them can be trusted, who is who?? If a viewer were given reason to care, keeping one brown haired unshaven guy straight from the other two would be an easy enough task to track. Unfortunately, that's not the case.

Visually, the filmmaker seems to be leaning on cinematographer Charlotte Bruus Christensen (The Hunt, Far from the Madding Crowd), who cultivates a consistently dreary atmosphere of dread and bad dream. When it comes to characterization, he opts to not only try to get into the heads of Rachel, Megan and Anna, but literally fill the frame with them. Leaning so heavily on close-ups throughout this film evokes the wrong kind of claustrophobia. It's not so much like being on a small train cabin, but rather like having someone constantly stick their face into yours. One can't help but speculate that a little distance between the characters and the lens would've served to stir up a necessary engagement, as viewers would have to “lean in” to find these people they came to see. Instead, Taylor is careful not to ask anyone watching this film to work that hard.

(Potential spoilers in this paragraph...)

The bloodlust that The Girl on the Train shamelessly calls up and then plays upon is different from the typical audience bloodlust of thrillers and also action movies. We're used to being presented with a villain and his/her atrocities, which serve as a call for justice (blood). While this layer of engagement isn't untrue of The Girl on the Train, there's something else going on, and it's disturbing. This is a very mainstream thriller that freely taps into common female frustrations to evoke certain calculated audience response. In my screening, the gratuitous resolution drew the loudest burst of satisfied cheers I've heard at the movies in years – twice. In other words, it's not the film's murder storyline that very effectively provokes the viewer catharsis, but rather the built up wave of sadly relatable female issues. The film is taking sly advantage of “every woman's troubles."

While not a trainwreck on the surface, The Girl on the Train burns with bad fuel, spewing foul exhaust in multiplexes everywhere. Sadly, audiences will no doubt be all too happy to breathe up. And in an already disturbing movie, that's the most disturbing thing about it.

Do you feel this content is inappropriate or infringes upon your rights? Click here to report it, or see our DMCA policy.
Emily BluntPaula HawkinsTate TaylorThe Girl on the Train

More about The Girl on the Train