Crowdfund This! Frank Henenlotter's THE TRIAL OF MIKE DIANA Needs Your Help 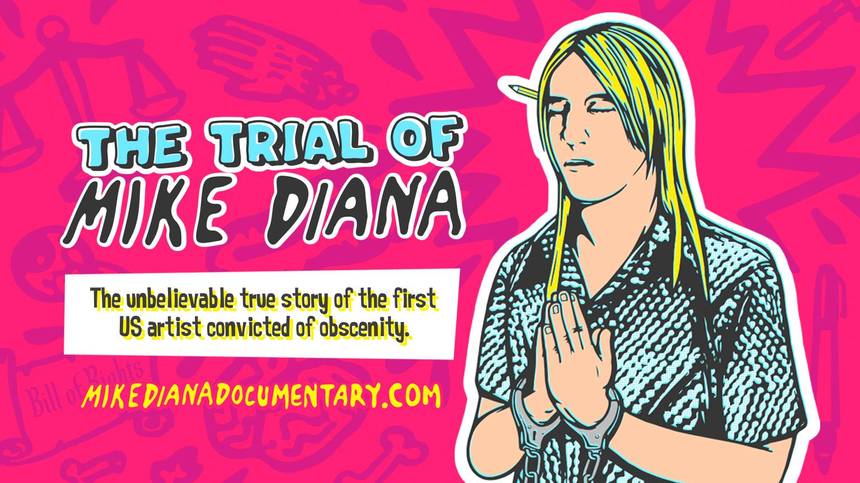 In 1994, underground cartoonist and illustrator Mike Diana was tried and convicted of obscenity.

The story behind his prosecution and conviction is one of the most amazing miscarriages of justice in the history of the American legal system. To this day, Diana stands as the only American ever to have been convicted of obscenity and to have served jail time because of it. As part of his sentence, Diana was even prohibited from drawing at home for his own personal use. It's a fascinating story that deserves more attention, and cult filmmaker Frank Henenlotter is up to the task, but he needs your help to finish The Trial of Mike Diana.

Henenlotter, the director of cult classics Basket Case, Frankenhooker, Brain Damage, and more, has put together an amazing set of interviews regarding the MIke Diana case. Not only does he talk to Diana himself, his legal team, and an all-star team of comic heros like Neil Gaiman, he also managed to get the original prosecutor to join the documentary, which brings an amazing balance to his investigation of this fascinating story.

Today the team launches their Kickstarter campaign to secure production and post-production funds for the film, and they are offering up some really great perks for contributors. Among the perks are the usual DVD & Blu-ray packages, along with some custom art options, an enamel pin, and much, much more. But really, the true reward of contributing is that you can help this story get told, and on their Kickstarter page, the Trial of Mike Diana team lays out their plans for your money, and it all sounds pretty solid.

Check out the Kickstarter pitch video below and the attached press release for furhter details and then follow the link to contribute to this worthwhile project.

THE TRIAL OF MIKE DIANA has launched a Kickstarter campaign to raise funds to finish crafting the definitive film account of a Florida First Amendment case whose verdict and unbelievable sentence strikes ire in comic book creators even decades later.

Legendary cult filmmaker Frank Henenlotter (BASKET CASE, FRANKENHOOKER) has set out to tell the story of Mike Diana, the first and only artist in US history to be convicted of obscenity. Diana's landmark case resulted in a sentence which required him to pay a $3,000 fine and have no contact with children under the age of 18. He was even prohibited from drawing images for personal use in his own home.

THE TRIAL OF MIKE DIANA has begun production with the full participation of Mike Diana and unprecedented access to his personal archives. The story is supported by those who were there during the trial, as well as an illustrious group of comic book luminaries like Neil Gaiman, Peter Bagge and Stephen Bissette. Mike Diana himself will also contribute original animation to the film.

Could history be repeated? The alarming state of US politics suggests the freedoms we take for granted are more at risk today than ever before, highlighting the urgency of telling the cautionary tale contained in THE TRIAL OF MIKE DIANA. As Henenlotter puts it: “Freedom of Speech doesn't mean anything if your art is declared ‘obscene.’ and one man's art could be another man's obscenity. That's the battle we explore in this documentary: an improbable collision between comic-book art and the First Amendment.”

Potential supporters can choose from a wide range of rewards being offered by the campaign, from an exclusive limited edition comic book by Diana to signed blu-rays, as well as personalized artwork and exclusive opportunities for personal interaction with the filmmaking team. The campaign will run until Thursday, November 17th at 9:00PM.

More about The Trial of Mike Diana