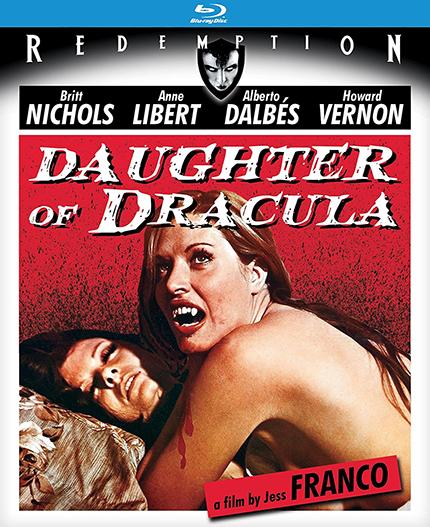 Jess Franco's 1972 toss-off Daughter of Dracula is basically identified as such (a toss-off) on the blu-ray's commentary track by genre film historian and publisher Tim Lucas. A shallow, scattered quickie for both filmgoer and filmmaker, the movie consistently keeps you guessing. Mainly, you'll be guessing whether or not the next shot will be in focus, an unnecessary zoom, or both.

Beyond that, the primary questions are, What the heck is going on? And why are there so many knockout-beautiful women hanging around this old, remote, stock-footage haunt of a locale? One wonders if their considerable hair, make-up and grooming supplies must arrive via international chartered flights then transfer in by pack mule. Like every other question this film raises, this one goes unanswered.

Hats off to Lucas, that veritable video watchdog, for doing his best to play this commentary as straight as possible. He does indeed point out the hackneyed films many inconsistencies, essentially confirming that it was built as it appears to have been: A quickly assembled product made up of some bits of other films, some hastily grabbed filler, and the softcore money moments. Lucas doesn't condescend, as his legitimate fascination with the prolific Franco and his considerable output comes through. At times, he perceives an art and even elegance in moments of Franco's work that I confess I don't quite yet see. 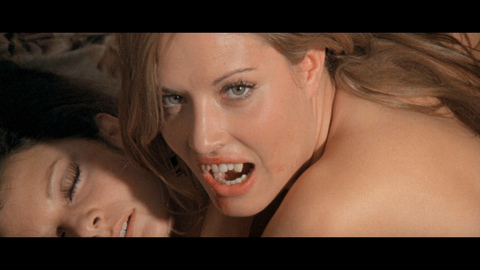 But that aside, this is a poor film. Even at 82 minutes, it drags. Every 20 minutes or so, one or more beautiful woman will completely lose her clothes, and maybe start kissing on someone. If it's the titular "daughter of Dracula" - the incredibly striking Britt Nichols - then there's biting, as well. It’s more Euro-schlock time capsule than legitimate movie, a mostly incoherent mishmash of stuff.

The familial hows and whys of Nichols being Dracula's daughter is never explained, nor is it explained what she's up to. She likes to skulk around in closets and spy on other naked women, as the many many zoomy closeups of her unmistakable spying eye attest. (The zoom lens does get a workout with this movie!) Every now and then, she visits the tomb of a weirdly half “alive” Count Dracula (also called Count Karlstein), depicted here as grey haired actor Howard Vernon dressed as a maitre de with a Bela Lugosi cape and a dead Joker smile. Like some kind of wind-up toy in its last active moments, he starts to sit up, but can't quite make it out of his coffin, ever. At one point, he's happy to have his daughter toss him a nekkid lady to devour. Vernon, nice gig. Miss, fire your agent. 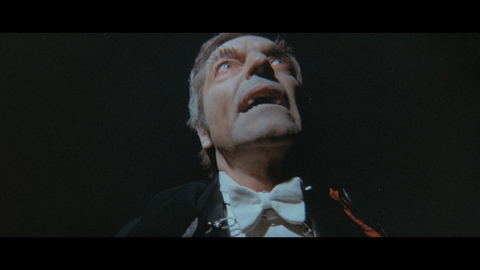 This new blu-ray edition of Daughter of Dracula hails from Redemption Films via Kino Lorber, bearing a spine number of 50. The film is in French with optional English subtitles. The image quality is moderate to acceptable, at times mildly washed out, soft, and/or scratched. One can't imagine that the bump to high definition does it too many favors, outside of general grindhouse ambiance and pubic hair detail. The film is in Italian with English subtitles, not that anyone says anything particularly important.

Aside from Tim Lucas' solid commentary, there are also a few minutes of alternate, less explicit footage. Most notable here is a scene in which Nichols, in the film proper, spent minutes fully nude on a bed making out with another woman becomes thirty or so seconds of her on the bed in a turtleneck sweater and jeans, mostly talking. The extras also provide the film's trailer, itself a veritable supercut of the film's highlights. 1972 was definitely a different time.

The press notes for this release point out that Daughter of Dracula is based upon "Sheridan LeFanu's ‘Carmilla’ (which was also the source of Hammer's lesbian vampire trilogy), but as one might expect, Franco's version was unlike any treatment the story had yet received." I assume that's a veiled way of saying "disjointed" and "non-trackable". This being my first Franco film, I can't be quite sure.

Having been an active DVD and blu-ray collector for nearly twenty years, I've certainly seen and read about umpteen Jess Franco releases from boutique labels such as this one, all of varying quality and significance. Somehow, this film - a lesser work, as it turns out - is my own introduction to his unwieldy filmography. As far as sexy, cheap, boring movies go, this one is so-so, delivering the former quality (sexy!) in true 1972 artsy vapidity, doing its occasional best to distract from the middle quality (cheap) and counter the latter (boring). Franco himself plays a part in the movie, looking just as blank and confused as anyone watching.

Daughters of Dracula is a curiously, mildly perverse look at the early 1970s trash cinema circuit, a time when art had a real shot at sneaking into that scene. That said, this movie is more effective as a softcore lesbian romp than a horror film. It nails neither. Best I can figure, this release is for Franco completists, and not really anyone else.

Do you feel this content is inappropriate or infringes upon your rights? Click here to report it, or see our DMCA policy.
Daughter of DraculaJess Francolesbian vampire