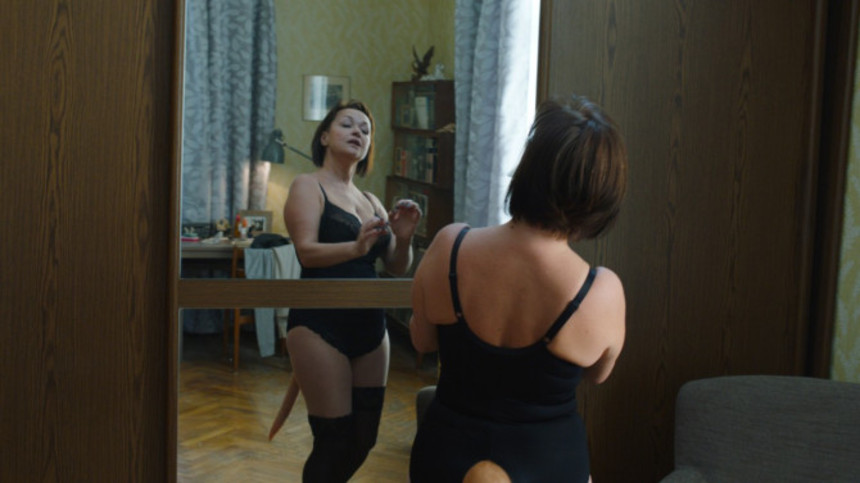 Everyone hopes that they are special and unique in some way. Whether it's a subtle uniqueness that only presents itself in being exceptional within our own little circle, or the kind of superhuman abilities that we attribute to those who live in higher strata of life: olympic atheletes, movies stars, you know, those kinds of people. But then there are those among us who become unique because of a natural aberration that leaves immediately marks them as a pariah or a freak. The obvious physical deformities that attract attention through no fault of the person exhibiting them, often to that person's detriment. Such is that life of Natasha, the central character in Ivan I. Tverdovsky's dramatic fantasy, Zoology.

An eternal virgin well into middle age, Natasha lives with her mother in a dowdy, drab apartment in Russia and pays the bills by working as in the office of a major zoo. In every facet of her life, Natasha is a victim of the cruelty of others. In fact, she attracts the kind of venom from her co-workers that might be more appropriate had she committed adultery with their husbands. All of them. At the same time. But alas, Natasha didn't even have the privelege of enjoying that momentary satisfaction to earn the scorn of those around her, she's just a soft target and she doesn't fight back.

Natasha's life of monotonous emotional torture is only broken up by her frequent visits to the animals in her zoo. She talks to them, brings them treats, narrates imagined small happenings in their lives, and communes with them in a way that she cannot seem to manage with her own kind. However, it soon becomes apparent that those she's wishes paid her some positive attention may not be her own kind at all. One day, you see, Natasha sprouts a tail.

It reaches a little more than halfway down her leg, and seems to sprout from where her tailbone should end. The tail, hairless and a little bit thicker than what we might expect from a monkey's tail, seems to have a mind of its own. When Natasha decides to visit the doctor to have her new appedange examined, she referred to the radiologist for an X-ray. When she arrives in his office, she sees Peter, a handsome younger man who calmly asks if she can keep the tail still so he can get a good image. However, her tail has a hard time complying, perhaps betraying Natasha's own unexpected excitement at Peter's good looks and welcoming demeanor.

As she is forced to meet him again and again to try to get a better X-ray image, Natasha and Peter strike up an unexpected romance. Perhaps not quite May-December, but certainly June-August. Natasha suddenly blossoms from a dowdy old woman who wears no makeup, and no dresses above the ankle into a picture of health and self-respect. A new haircut, a sparkly dress, and a spring in her step show us a new Natasha, ready for a life beyond her own misery.

Meanwhile, in her town rumors spread of a witch with three tails who has come to spread disease. This small community is suddenly all aflutter with morbid tales of Satanic rituals and demon infiltration. Natasha enjoys her new life, blissfully unaware that the town around her has got itself in a tizzy over this perceived threat. How will this affect her and how will her newfound romantic relationship react? Well, it's a complicated answer that definitely muddies the moral of this story.

Zoology is awash with metaphor. Natasha's new accessory represents many different things to many different people. To her it is a sign of uniqueness, a sign that she may not be destined to suffer at teh hands of others because she is not like them. To those around her it is an unseen menace that threatens their dull lives with danger and strikes out against the conformity that keeps them all safe in their minds. To Peter, it is something else entirely, a totem that ultimately proves to be difficult to resist. Unfortunately, the film has a hard time reconciling these conflicting metaphors, and that leads to an ending that nearly cuts off the film's nose to spite its face.

There are certainly confusing and illogical elements of Zoology right from the start. The timeline of Natasha's awareness of her tail is muddy at best. The wildly differing reactions to her predicament between the general public (fear) and her doctors (bland acceptance) is a bit confusing, as though these doctors are immune to shock or even curiosity. Not to mention the ending of the film which appears to undo a lot of the emotional heavy lifting that Natasha had done throughout the story. However, all of these elements do a good job of underlining the films fantastical setting, this is not the real world, so why should the characters act as though it is?

Director Tverdovsky has created an unusual beast in Zoology, and much like its central character, the viewer will likely be questioning the outcome of the film after the final credits roll. Natalia Pavlenkova, who plays Natasha, displays an admirable commitment and wonderful sense of freedom. She is clearly the best thing about this film which is otherwise populated with savage mean women and intentionally bland supporting cahracters. Pavlenkova breathes necessary life into the story, often allowing the viewer to escape the dreariness of the cold Russian setting and into her fantastical flights of happiness that don't require a bunch of special effects, it's all there in her face.

This is a film that is difficult to discuss in depth without giving up some plot points that would be better left discovered by the audience. That being said, the film is sure to inspire a lot of conversation and definitely more questions than answers. That quality alone is enough to get a thumbs up from me, and so Zoology is a film worth recommending. It's an interesting journey for Natasha and the viewer, and it's one best experienced as cold as possible. In spite of what seems like some rather extensive plot summary above, I assure you, there is a lot more to absorb in Zoology, and there is a joy and satisfaction in that challenge.

Do you feel this content is inappropriate or infringes upon your rights? Click here to report it, or see our DMCA policy.
Fantastic Fest 2016Ivan I. TverdovskyZoology