Now on Blu-ray: EVILS OF THE NIGHT and TABOO, A Sleazy Double Header

Vinegar Syndrome recently released a pair of super sleazy films that might be of interest. An alien invasion/abduction horror from the '80s called Evils of the Night delivers lots of skin and a few bloody deaths, while adult classic Taboo tells a very skeevy story with a surprising amount of class and craft.

Evils of the Night 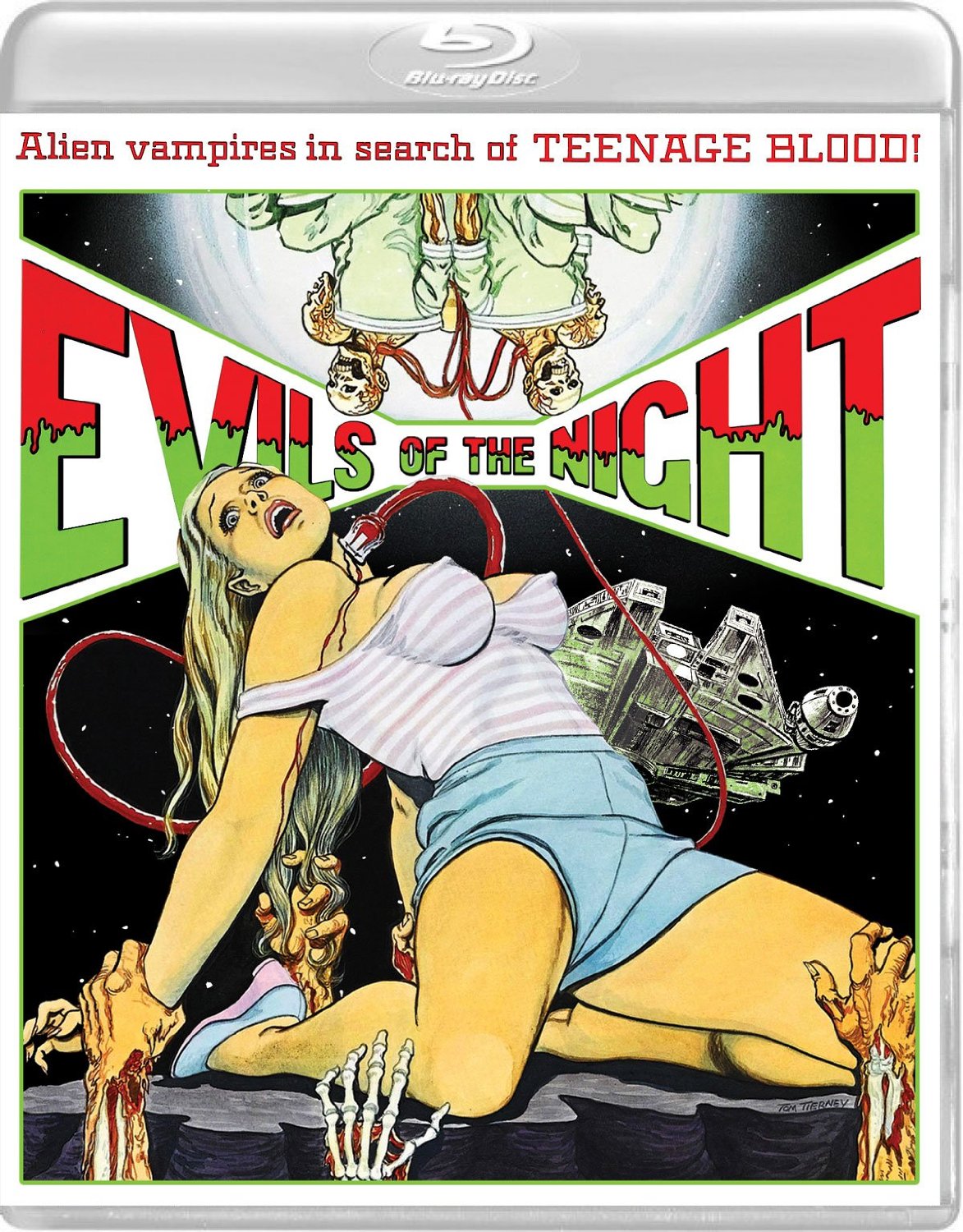 There is no universe in which director Mardi Rustom's Evils of the Night is a good movie. It's pretty bad right from the start. The real question is, does the film have enough bizarre antics and casual nudity to at least be entertaining. Well, that's also debatable, but I tend to find myself leaning toward the “yes” side of that argument, though your mileage may vary.

In Evils of the Night, horny teenagers are pursued by nefarious aliens as a source of blood on which to feed. When the film was released in 1984, it was already common knowledge, and even lampoonable fact, that slasher movies were frequently little more than an excuse to watch a bunch of pretty young girls take off their clothes and get hacked to bits as a reward. Evils of the Night takes that ball and runs with it in a way that very few other films managed. Copious, ridiculous, even hilarious amounts of nudity fill Evils of the Night from open to close, to the point where the exposure becomes tedious fairly quickly. However, Rustom does manage to intermittently interrupt the skin show with a giddily gory on-screen death, so it kind of evens out.

Rustom, who also produced of previous Vinegar Syndrome release The Psychic Killer, tries out the director's chair for the first time in Evils of the Night, and it is pretty clear that his viewpoint was simply to make this thing sellable by any means necessary. In his mind that apparently meant having every woman in the film nude as often as possible. I have to say, it makes sense to me. However, the film suffers from the awful plague of being boring more often than not when the nudity is gratuitous. After a while it's no longer titillating.

In spite of all that, Evils of the Night does come in for the last minute save with a few well staged splattery deaths that make the whole thing almost seem worth the journey. Fans of over-the-hill actors cashing paychecks in garbage will enjoy seeing performers like the late, great John Carradine as the head alien vampire, with Gilligan's Island's Tina Louise and former TV Catwoman, Julie Newmar as his alien agents on earth.

Evils of the Night appears on Blu-ray is a newly restored 2K scan from the original camera negative. The movie looks about one kajillion times better than it has any right to. Clarity is great, colors looks vibrant, and detail pops. Who'd a thunk? The audio also sounds good, which is nice because Evils of the Night features a SUPER synth heavy '80s soundtrack that bumps nicely.

Rustom appears in an extra called Alien Blood Transfusion in which he discusses his career and work on Evils of the Night. We also get twenty-five minutes of outtakes and a pretty solid isolated audio track. Not too shabby.

This one might not be a blind buy, but if you can find a way to see it and it tickles your fancy, you're unlikely to find any better option than this. 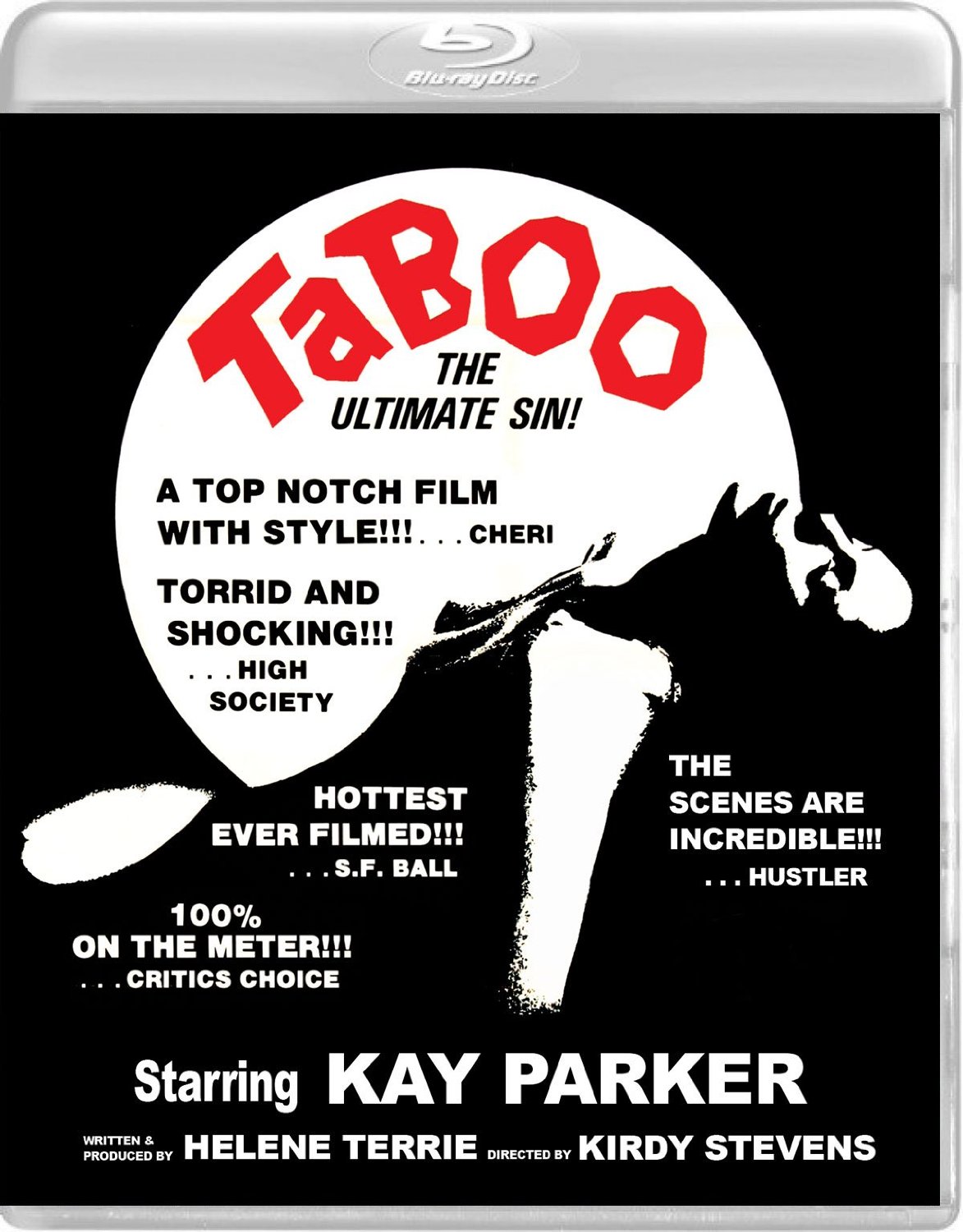 Taboo is the story of Barbara Scott (Kay Parker), a woman whose husband has left her for a younger woman and who can't seem to get her groove back. Meanwhile, her handsome son Paul is pulling chicks left and right, and his raw sexuality has awakened forbidden urges in his mother's loins. After Barbara attempts to sate herself with other men, it becomes obvious to her that Paul is the only man who can quench her sexual thirst, and, well, I think you can imagine where this is going...

First of all, allow me to express my innermost feelings about the concept of incest:

Taboo looks great, in fact, in some of the more, ahem, intimate sequences, you may see more than you expected due to Vinegar Syndrome's new 2K scan. The audio is similarly solid, bringing the dialogue and other ambient sounds to the forefront in a clear an satisfying way.

This is a great disc of an interesting film that will certainly be of interest to the more open minded of our readers.