HEADSHOT Bludgeons And Brutalizes Online With Its First Teaser 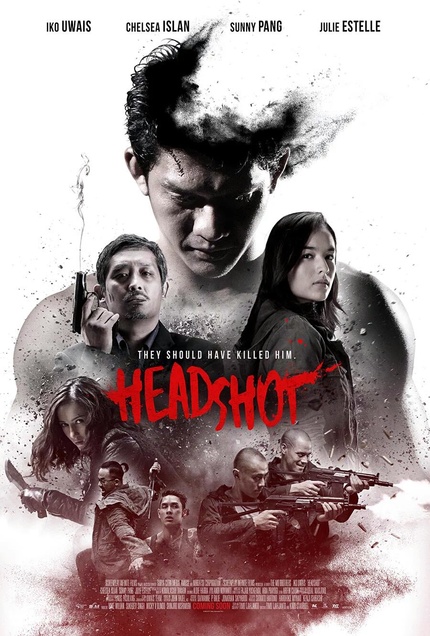 TIFF attendees are days away from the forthcoming Midnight Madness premiere of the new Iko Uwais-starring thriller, Headshot, and so the promotional campaign officially ramped up this week with a new teaser first presented at EW, and now officially from Screenplay Infinite Films. Here is how TIFF programmer Colin Geddes presents the new thriller:

When an unknown Indonesian film was selected as the opening-night event for Midnight Madness in 2011, the audience didn't know what to expect — but when the lights came up at the end, action cinema had a new hero. The Raid left viewers with a serious case of whiplash thanks to the furious flying fists and lightning-fast feet of star Iko Uwais. Now Uwais returns to Midnight Madness as the hero of Headshot, an amnesiac who's forgotten everything about his past life — apart from his aptitude for ass kicking.

A nameless man (Uwais) wakes up in a hospital with severe head trauma, not knowing who he is or what happened to him. Assisted by devoted student doctor Ailin (Chelsea Islan), who nicknames him "Ishmael" after the character in Moby Dick, he recovers and tries to regain his memory. Naturally, Ishmael's past is about to catch up with him, in the form of Lee (Sunny Pang), a drug lord and gang boss whose tentacles reach deep into the police and the penal system. When Ailin is kidnapped and Ishmael sets out to get her back, he finds himself pitted against an array of skilled fighters who may have been his former colleagues. As Ishmael battles through a series of deadly fights with this squad of enforcers, fragments of his past are teased out and the puzzle of his identity begins to come together.

Directors Timo Tjahjanto (known in the West for the "Libido" segment in The ABCs of Death (Midnight Madness 2012) and the "Safe Haven" episode in V/H/S/2 with Gareth Evans) and Kimo Stamboel — a.k.a. The Mo Brothers — have a keen eye for action, and they keep it coming at a speedy clip as Ishmael kicks, punches, ducks, and flips his way through the Indonesian underground.

As of last week, successful pushing of Headshot has also presented an opportune moment for co-director Tjahjanto to finally get his solo directorial debut, The Night Comes For Us off the ground after nearly two years in limbo. Uwais, much to our delight, is also partaking in the film for fellow The Raid co-star Joe Taslim to take the lead.

More details will follow, but the continued proliferation here of Uwais as a leading man of the martial arts action genre for the last six years up to now serves as a terrific lead-in to 2017 and from then on. The actor still has many titles on his plate with forthcoming appearances in Liam O'Donnell's Beyond Skyline and the currently-developing Mile 22 at STX, and with all the hope in the world, Gary Mak's ensemble feature, Makeshift Squad, and a third installment to the electrifyingly brual crime saga that has become of Gareth Huw Evans's The Raid franchise.

Headshot makes its way to festivals at Busan and Mayhem in October before rolling out in theaters later on with Vertical Entertainment and XYZ Films releasing in the U.S. in February of 2017. Catch the teaser right now!

Do you feel this content is inappropriate or infringes upon your rights? Click here to report it, or see our DMCA policy.
HeadshotIko UwaisJulie EstelleKimo StamboelMidnight MadnessTIFFTimo Tjahjanto