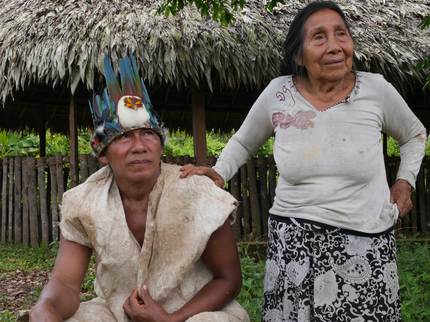 Documentary filmmakers, Adam Punzano and Joe Tucker, are seeking funds to complete their documentary on the indigenous peoples of the Ecuadorian Amazon. The crowdfunding campaign aims to raise $10,000 in order to take the documentary through editing and post-production, and to distribute it as widely as possible.

These neighboring communities are united in their common struggle to protect their natural environment. They face pressure from the imminent entry of oil companies onto their territory following the auctioning off of blocks 79 and 83 to Andes Petroleum in January of this year. As seen in other parts of the Amazon, the entry of oil companies would have a significant impact on the natural environment on which these communities rely.

They are also confronting the forces of globalization which threaten to erode their culture and way of life, which in the case of Sapara has left the nation facing huge uncertainties as to whether their culture and language will survive.

Through a series of in-depth interviews with a range of community members, including spiritual and political leaders, the documentary will capture a detailed representation of the current situation faced by these communities.

It will feature their inspirational resistance, wide-ranging philosophy and the central role indigenous women are playing at the forefront of the struggle. Interview footage will be interweaved with a range of general community activity footage and scenes from daily life in these jungle communities to give a detailed insight into their lives.

The film will explore the importance of medicinal knowledge and ceremonial practices as well as their unique worldview based on a profound, spiritual connection with nature. It will also include the innovative environmental proposals that have been developed and presented by community members in international forums such as COP21 in Paris aiming to protect the Amazon forest not simply for themselves but for the whole of the planet.

Through an examination of these themes the film will seek to inform audiences of their vision for the future. It intends for the international community to learn both practically and philosophically from the Sapara and Kichwa communities in its attempt to confront global environmental degradation and the threat of climate change, whilst also building awareness to support them in their current struggle to protect their territorial integrity and culture.

The documentary team spent a number of weeks filming in the jungle communities of the Sapara and Kichwa of Sarayaku, fully immersing themselves in community life. They then headed northeast to the border town of Nueva Loja and surrounding areas where they explored the environmental and social implications of oil extraction.

Nueva Loja and its deforested surroundings will provide the contrast point to the preserved forest and the sustainable ways of life documented in the jungle communities, whilst also illustrating the stark dangers of pursuing oil extraction as the team were confronted with accounts of environmental contamination which has led to grave and widespread health problems.

Meeting with a committee of local people affected by contamination and interviewing the President of  the ‘Frente de Defensa de la Amazonia’, the team heard testimonials that affirmed the importance of the community resistance documented in the forest and a shared desire to keep the preserved rainforest intact and free from extractive industries.

Details regarding the development of the project, distribution strategy, cost breakdown and the film trailer are available on the Indiegogo page-

The team can be contacted at- perspectivas.indigenas@gmail.com

Do you feel this content is inappropriate or infringes upon your rights? Click here to report it, or see our DMCA policy.
amazon rainforestclimate changedocumentaryenvironmentalfilmhuman rightsindieindigenouspolitics