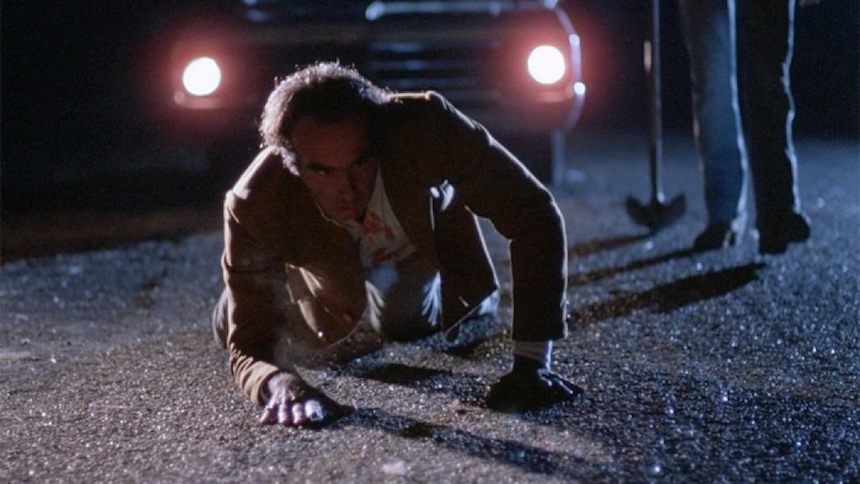 It's always fun to witness the debut of a fantastic filmmaker. In this case, it's the birth of TWO filmmakers, the team of Joel and Ethan Coen, who debuted in the lexicon of cinema with the neo-noir film Blood Simple in 1984.

Starring Frances McDormand, John Getz, M. Emmett Walsh, and Dan Hedaya, Blood Simple is the tale of a Abby (Frances McDormand), very young wife who tries to escape her marriage to psychotic, wealthy bar owner Julian Marty (Dan Hedaya) via one of Marty's bartenders, her new lover Ray (John Getz). In no short time, Marty hires a private detective to follow the two, and when Marty sees photographic proof that his wife has been unfaithful, he hires the same man to off them.

In noir, things always go wrong --- and that's the fun part. The PI Marty has hired decides that he'd rather doctor photos of the lovers' death and then kill Marty and take his money, than actually murdering the couple. Ray comes across the boy of Marty in the bar and decides (probably from stupidity and fear), that he should clean up. Of course, as the guy sleeping with Marty's wife, he wouldn't entirely escape blame --- or motive --- anyway.

As it turns out, Marty isn't quite dead --- yet. Ray discovers this and must bury him --- ALIVE --- in a barren farm field in the wee hours of the night. The sequence is rife with horror and dread, right up there with Alfred Hitchcock's oeuvre. If you love classic thrillers and haven't seen this film, you need to.

The Criterion Collection's new Blu-ray release is a great place to start. With a new 4k digital transfer over seen by the Coen Brothers and their cinematographer Barry Sonnenfeld, Blood Simple reveals crisp sound and a great picture, with minimal flickering and some grain.

As with most Criterion editions, cinema fans and film students will eat this one up. It was interesting to watch the conversation between the Coens and Sonnenfeld on what they felt the film's greatest visual mistakes were and how they would remedy those, given what they know now. A discussion between author Dave Eggers and the Coens is also illuminating.

Blood Simple is out on Blu-ray and DVD from the Criterion Collection on September 20.

Check out the 4K restoration trailer below.

Do you feel this content is inappropriate or infringes upon your rights? Click here to report it, or see our DMCA policy.
Blood SimpleCoen BrothersCriterion CollectionDan HedayaFrances McDormandJohn GetzM. Emmett