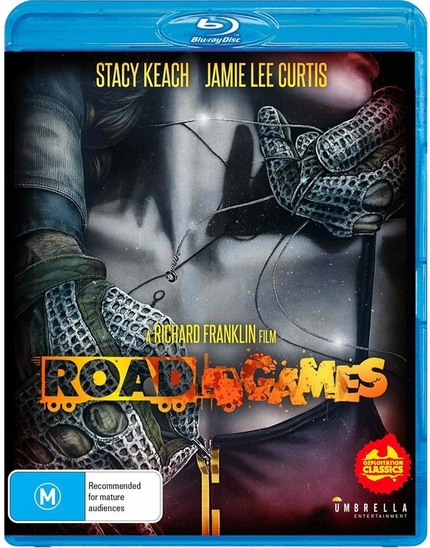 Fans of Mark Hartley's groudbreaking documentary Not Quite Hollywood will be very familiar with Road Games.

This Australian exploitation classic, directed by Richard Franklin, features in that documentary in a big way, largely because of the fact it was one of the first Australian productions that brought on big American talent. That talent, in the form of a grizzled but affable Stacy Keach as a long haul truck driver and the nubile Jamie Lee Curtis as an American hitchhiker making her way across the outback, set the film apart from many of its contemporaries. Franklin's film ends up juggling a couple of genres quite effectively by the time it winds up, and it dodes so with relative ease.

Pat Quid is a long haul truck driver racing against the clock as his cargo of fresh meat must arrive on store shelves on the other side of Australia before an impending meatpackers strike cuts off the nation's supply. The Australian outback is unforgiving and can play games with your mind if you don't play first, and as such Quid entertains himself on the road by imagining backstories for the families he passes during his endless hours of driving.

Along the way he picks up a hitchhiker -- he refers to her only as "Hitch" -- who is just looking to escape from her life. While on the road they hear news of a serial killer who is picking up young girls along the outback highways and then raping and killing them before scattering their remains along Australia's desolate Nullabor Plains. Quid's enthusiasm for something to think about turns to curiosity and before long he and Hitch find themselves involved in a way that could cost them their lives.

Road Games is a really interesting take on the road thriller genre, and one that definitely deserves a fresh look. Over the years, the genre has had several notable entries, but the vast majority utilize the long haul trucker as the villain rather than the hero. Films like The Hitcher and Joyride assign menace to the unseen long haul trucker by virtue of his ability to remain unseen, but Road Games takes us inside the cab.

Both Quid and Hitch's American heritage and mannerisms also clearly separate them from everyone they encounter, even though neither is truly a tourist, and Quid is even a working man, which seems like it would be appreciated among the blue collar denizens of the outback.

This 'stranger in a strange land' dynamic between Quid/Hitch and the hostile environment of the outback -- both human and natural -- sets up an interesting tension that puts Road Games in good company with films like the more recent Wolf Creek. Australia has been home to quality genre output for at least four decades, but the recent rediscovery of these films puts more and more of them into circulation and allows new and younger viewers to find what they've been missing. Road Games certainly deserves it's place among those classics.

Road Games comes to Blu-ray from Umbrella Entertainment, which have recently restored the film from a new 4K scan. For reasons unknown, the 35mm element chosen for the scan was a release print of the film, which creates some problem areas that fans will likely notice.

First of all, a release print is at least three generations away from the original material (negative -> interpositive -> release print), which means that some degradation is inherent in even the best examples. Secondly, positive prints and release prints are significantly more contrast-y than the original negatives, which is quite obvious upon viewing Road Games on this disc. The sharpness definitely suffers from the degradation between generations, and the colors and contrast contain far fewer gradations than modern cinephiles have become accustomed to.

It's one of the reasons that the original camera negative is by far the preferred method of transfer. All that being said, the print has been cleaned up, and it looks about as good as one might expect of a 30-year-old 35mm print that's been around the block.

Where this presentation of Road Games really shines is in the wealth of extras that Umbrella has licensed and created for this disc. Road Games is one of those films that was taken up in the early days of DVD by Anchor Bay, who became famous for their extensive home video editions of genre titles. As such, a lot of the extras have been packed with Road Games' new Blu-ray. Umbrella has also created new interview footage with Stacy Keach and stunt coordinator Grant Page.

They've also included a doc on the making of the film from its DVD release in 2003 titled Kangaroo Hitchcock, which is amazingly informative and features interviews with much of the principal cast and crew. There are a ton of outtake interviews from Not Quite Hollywood with Keach, Franklin, Page, and Curtis. There is a great commentary with Franklin from the earlier Anchor Bay DVD and also a two hour lecture with Franklin, producer Barbi Taylor, and composer Brian May, in which the film is discussed at length in an academic setting. There is an archival interview with Franklin from the time of the film's release in 1981.

But that's not all! Rounding out the hours and hours of extras is a featurette describing the process of rescanning and restoring the film with the technicians and cinematographer Vincent Monton in which they discuss the restoration, as well as the pros and cons of using the release prints.

This disc is exhaustive, and barring any principal cast and crew rising from the dead for interviews, probably about as close to definitive as we're likely to see. Highly recommended!

Road Games is now out on region free Blu-ray from Umbrella Entertainment.

Do you feel this content is inappropriate or infringes upon your rights? Click here to report it, or see our DMCA policy.
AustraliaBlu-rayJamie Lee CurtisRichard FranklinRoad GamesStacy Keach