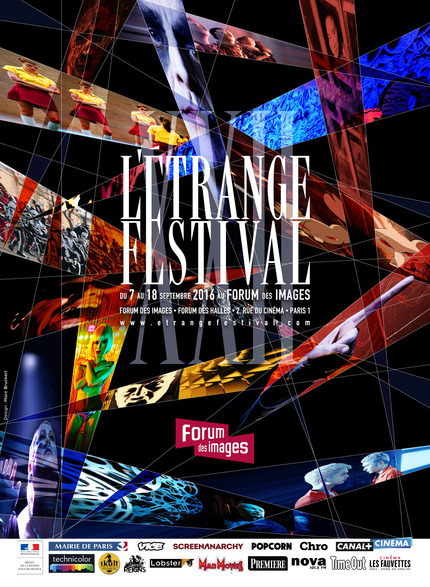 European genre film fans, rejoice, for the Paris based L'Etrange Festival have announced their complete lineup and - as per usual - there's a whole lot in there to love alongside a title or two sure to stir up controversy. No doubt ticking both the 'love' and 'controversy' boxes depending on who you talk to will be Japanese maverick Sono Sion's Anti-Porno, billed as a satire of the pink film industry which has its European premiere at the festival.

The complete list is a doozy, but you can find the full announcement below and the official festival website here.

L’Étrange Festival – a unique event bringing filmgoers a fascinating roster of provocative and eye-opening films – is thrilled to announce the line-up for its 22nd edition, September 7 – 18, 2016 in Paris, France.

L’ÉTRANGE FESTIVAL is often regarded as the most “exciting cultural event of the Fall season in France” and is attended by over 25000 rabid moviegoers each year.

Over the course of twelve days, more than 90 features will screen at L’Étrange Festival, among which 4 world premieres, 3 international premieres, 6 European premieres and 26 French premieres…

… such as Rupture by Steven Shainberg, The Marriage of Reason & Squalor by Jake Chapman, Revengeance by Bill Plympton & Jim Lujan, Terror 5 by Sebastian Rotstein & Federico Rotstein, We are the Flesh by Emiliano Rocha Minter, Dark Circus by Julia Ostertag…

… and many high-profile Asian films such as Anti-Porno by Sion Sono, Wet Women In The Wind by Akihiko Shiota, The Bodyguard by Yue Song, Hime-Anole by Yoshida Keisuke, When Geek Meets Serial Killer by Remus Kam, Chin Pei-Chen & Eric Cheng, Terra Formars by Takashi Miike…

A record of 22 feature-length films have been selected for the NOUVEAU GENRE Grand Prize competition and will vie for a cash prize award amounting to the purchase of the French premium broadcast rights by Canal+Cinema. See full list below.

Last year, Schneider Vs. Bax by Alex Van Warmerdam won this prize. And in 2014, the prize went to The Voices by Marjane Satrapi. Both films had their preview at L'Etrange Festival before being acclaimed by the public and critics.

The same 22 feature-length films will also participate the second International Competition: The AUDIENCE AWARD. In 2015, the Audience Award went to Moonwalkers by Antoine Bardou-Jacquet.

Other high-profile events inClude

- an outstanding selection of previews and unreleased features divided in three sections:

3) DOCUMENTARIES including the international premiere of The Sion Sono by Arata Oshima and the French premiere of Mapplethorpe, look at the pictures by Randy Barbato & Fenton Bailey

- a “CARTE BLANCHE” offered to one of the most smashing and talented French contemporary artists: STÉPHANE BLANQUET

- a “CARTE BLANCHE” to JAZ COLEMAN / Killing Joke is probably one of the most influential band in the history of heavy post punk industrial music. Their front man Jaz Coleman steps out of darkness to present a movie selection of his own choice. He will also perform an hitherto unheard spoken word solo show for the live music section: L’Étrange Musique

1) Jaz Coleman Spoken Word: The Great Transformation / Killing Joke’s front man will open his heart and tell us about changing the world by changing one’s own conscience.

2) Test Dept: Redux / 35 years ago, Test Dept participated the invention of Industrial Music in England. They will confront the audience with their ‘stakhanovist sound’ and percussive addiction for their first Parisian performance ever! (In addition to the French premiere of the documentary Test Dept DS30).

3) Drahomira Song Orchestra / These French siblings of The Legendary Pink Dots and Nurse With Wound too rarely appear on stage. On that special occasion, they will be joined by Swiss singer Pony del Sol.

-a Focus dedicated to FRANK HENENLOTTER / Live in person, the master of gore will present four of his own splashing delights.

-a Focus dedicated to SHOHEI IMAMURA / A journey through the work of one of the most brillant Japanese film directors consisting of seven of his masterpieces (including two unreleased feature films).

-a Tribute to ANDRZEJ ZULAWSKI / RIP Mister Zulawski. An homage consisting of six of his most beautiful films and the screening of the documentary The Other Side Of The Wall: The Making Of Possession by Daniel Bird. The screenings will be introduced by close collaborators and friends such as Andrzej Jaroszewicz or Sophie Marceau and director Daniel Bird.

- a thematic selection ‘TO LIBERTY OR DEATH!’ / Freedom, revolution, poetry and films… From United Red Army by Koji Wakamatsu to The Weather Underground by Sam Green & Bill Siegel.

- a Masterclass with ALEJANDRO JODOROWSKY / In addition to the screening of Endless Poetry, MC Jodorowsky will dissect the true core of cinema under his wild and mystical eyes…

- a special screening presented by SCREEN ANARCHY with the European premiere of Headshot by Kimo Stamboel & Timo Tjahjanto (aka the Mo Brothers).

- GAUMONT Revisited / L’Etrange Festival flips through the pages of the Gaumont Catalogue and highlights 14 precious oddities.

- an ART EXHIBITION for the 20th anniversary of Arts Factory gallery (including works by Blexbolex, Charles Burns, Daniel Johnston and many more…)

Founded in 1993 by music producer, film-freak and journalist Frédéric Temps, L’ÉTRANGE FESTIVAL is often regarded as the most « exciting cultural event of the Fall season » or the « only festival where you can run across the father of midnight movies and the father of slasher horror ».

In the 22 years of its existence, L’Étrange Festival has built a reputation as a movie lover’s oasis by offering a fascinating and vivid immersion in cinema’s wildest, darkest and most adventurous ventures, through a special batch of premieres, third-run oddities, performances, special events and workshops.

"L’Étrange Festival is unique, in that it is neither a traditional art-house nor a horror or fantastic film festival." says festival director Frédéric Temps. "We strive to show works that defy conventions and that challenges the expectations and definitions of their genres. In this respect, L’Étrange Festival adds another dimension to the movie-going experience which appeals to cult addicts, discerning connoisseurs, dedicated completists and regular movie goers alike."

The 2015 Festival closed with the European premiere of Baahubali: The Beginning by S.S. Rajamouli.

We are now accepting applications for L’Étrange Festival Press Credentials.

8- We are the Flesh - Emiliano Rocha Minter French premiere

8- The Plague at the Karatas Village - Adilkhan Yerzhanov French premiere

Program 1: In Heaven everything is fine

Program 3: Where the Hell have I been?

A “Carte Blanche” to STÉPHANE BLANQUET

All screenings are introduced by Stéphane Blanquet

A “Carte Blanche” to JAZ COLEMAN

All screenings are introduced by Jaz Coleman

All screenings are introduced by Frank Henenlotter

4- Possession - Andrzej Zulawski + The other side of the wall: the making of Possession - Daniel Bird introduced by Marie-Laure Reyre, Andrzek Korzynsk, Andrzej Jaroszewicz & Daniel Bird

Thema TO LIBERTY OR DEATH!

9- Attack of the Robots - Jess Franco

13- Eyes Without a Face - Georges Franju