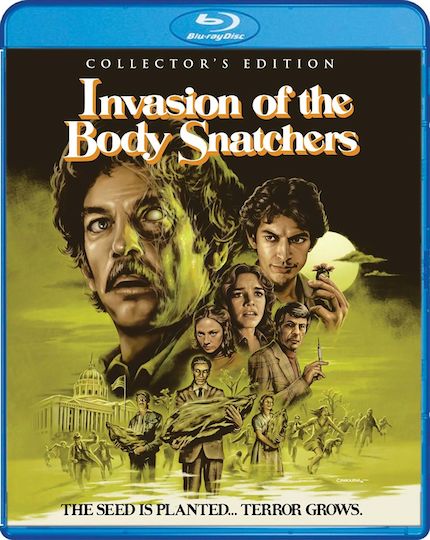 I found that the interviews with Art Hindle and Denny Zeitlin were the most eye-opening aspects of the special features. We get to learn a ton from these two about acting (and interacting), cast, and the development of the score, which is always fun.

So, is it worth it? I'd say yes, but here's the run down on the Blu-ray disc itself. Granted, there could have been a better clean-up and scan of the negative, but it's mostly okay. There's grain and flickering, and sometimes, a pink edge of the the frame, to put it lightly. However, it's likely that only Criterion would have the means to digitally remove these flaws. Does this take away any enjoyment of the film? Nope.

To recap: Kaufman's version of  Invasion of the Body Snatchers -- flower-like space spores begin to grow in San Francisco with alarming rates, leading to the pilfering of human forms in the Sunshine State and their regrowth, as far as replication is concerned. These aliens take over human hosts and begin their own take on American (and soon, global) society in record time. Who is who? Who's been turned?

Fun cameos by the original hero (Kevin McCarthy) and director (Don Siegel) of the first Invasion of the Body Snatchers keeps this edition firmly rooted in both homage. The best part of these cameos is that they don't suffer to over-sentimentalism but in fact, further the creepy narrative of the story. The acting and practical effects are top notch. Audio quality is very good for the most part, and while the picture is usually dark, we learn via the supplements that the cinematography was photographed very dark. This shouldn't take away from your enjoyment of the film, but of course, this is a matter of preference.

Overall, this edition of Invasion of the Body Snatchers comes highly recommended. Check out the trailer below.

More about Invasion of the Body Snatchers