Now on Blu-ray: Dolemite Returns in THE HUMAN TORNADO From Vinegar Syndrome 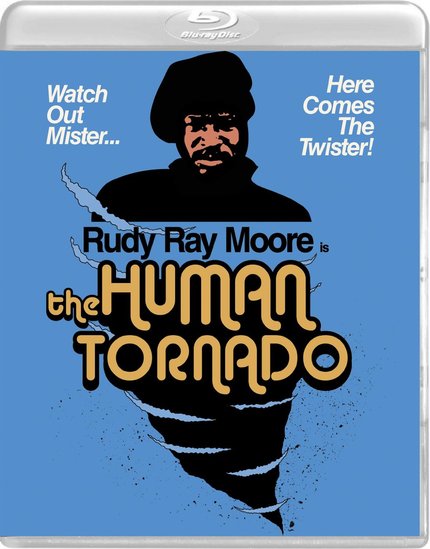 In the immediate aftermath of Rudy Ray Moore's Dolemite and its surprise success, it was decided that the team needed to keep the momentum going and a sequel was green lit almost immediately. Jerry Jones, who wrote the screenplay for Dolemite, was brought back to write this new film, The Human Tornado, but one gentleman who wasn't brought back was director D'Urville Martin. After a lackluster directing job on the first film, Moore and his team decided to bring in some new blood, and a young theater director named Cliff Roquemore.

It was Cliff Roquemore who shaped Rudy Ray Moore's screen legacy perhaps more than anyone outside of Moore himself. Roquemore was determined to make The Human Tornado something completely out of this world, and with the help of Rudy and his right hand man Jimmy Lynch, The Human Tornado became one of the craziest, most memorable blaxploitation films of the '70s. Roquemore's experience was in the independent theater scene, and his passion for black entertainment made this film, and his subsequent collaborations with Moore, utterly unique and powerful.

The Human Tornado has only the most tenuous of connections to the film that precedes it, outside of a few characters. Moore returns as Dolemite, the touring comedian who can't help getting into trouble. This time around a southern sheriff's department chases Dolemite and his closest friends away from his beloved home and off to far away California. Once he arrives, he finds that his club, The Total Experience, has been taken over by a nasty crew of mafiosos who shut it down and take all his talent to their own establishments. Piece by piece, Dolemite must put his crew back together and save the lives and livelihoods of his women before these hoodlums snuff them out.

The plot is really not all that different from Moore's first film, but the execution is on a whole other level of crazy. Rudy Ray Moore occupied a very strange place in the blaxploitation market. His films weren't quite the serious examinations of race politics that had received play in white theaters, but they weren't derivative enough to be considered spoofs, either. Moore took all of the exploitable elements at his disposal and mixed them up in a gigantic pop art explosion of the black experience. Kung fu, cuckolding the white man, and even some straight up torture chamber horror all make this one of the strangest films of its kind.

I've seen The Human Tornado a dozen times or more by now, and it never stops surprising me or making me laugh. It is a wonderfully eccentric piece of outsider art put together on a shoestring by a crew of filmmakers who barely know how to make a film. However, the results are riveting, and the lack of formal training or expectation really allows Moore to evolve his character from merely a badass dude to the kind of folk legend he always rapped about on his records.

What the collaboration of Roquemore and Moore added to the equation with The Human Tornado was a savage sense of humor and a willingness to stretch the boundaries of what the film could be. Moore was always an excellent rapper and storyteller, but in Dolemite these skills were only on display when he would stop the film to spin a tale from his stage act. While it's always entertaining, it does sap the energy from the film. Roquemore's solution is to have Dolemite's actions speak for him, so even while the rap is being told, it's not Dolemite standing in the middle of a crowd telling it - apart from an opening sequence with Moore doing his act in front of a club audience - it is instead Dolemite living out his royal badness.

Moore brought in martial arts champion Howard Jackson to help lend legitimacy to the fight sequences, and then he took all of Dolemite's fight scenes and sped them up to make them look like the badly dubbed chop socky flicks that played in urban theaters at the time. The first film took place in a world that is largely recognizable as real, whereas The Human Tornado takes place through the looking glass of black action wish fulfillment cinema. The only other film I can really compare it to is William Witney's amazingly out-there Darktown Strutters in terms of both films' willingness to disregard reality in search of a good gag.

The Human Tornado may not be Rudy Ray Moore's best film - although a case could certainly be made - but for those who've seen it, it is definitely the craziest and most memorable. If you've only ever seen Dolemite and have never given Moore a second chance after that, I implore you to try this one out. It broke my poor teenaged brain when I first saw it in the mid-90s, and it remains utterly unmatched in terms of balls out craziness to this day.

Vinegar Syndrome brings The Human Tornado to Blu-ray courtesy of a new 2K scan from vault elements. For the majority of the film, the image is beautiful, colorful, and crisp; however, time has taken its toll on the original elements, and there is a significant amount of irreparable damage. When it comes to rescanning a film like this, Vinegar Syndrome has always erred on the side of retaining the original look and feel of the film in lieu of a lot of expensive digital restoration, and this is no different. The Human Tornado looks and sounds better than it ever has, but be kind to it, as the years have not.

The extras on The Human Tornado work as a continuation of the bonus material that Vinegar Syndrome and Xenon began with Dolemite. The major bonus here is a making-of featurette titled I, Dolemite Part II, which literally picks up where the last disc left off. We get archival interviews with Moore, along with talking head pieces with biographer Mark Jason Murray as well as writer Jerry Jones, all-around player Jimmy Lynch, and Cliff Roquemore's sons. There is also an audio commentary with Mark Jason Murray and Jimmy Lynch that is informative and entertaining, though Murray frequently has to pry anecdotes out of Lynch, who seems to be feeling his age. Rounding everything out is a German dubbed version of the film titled Der Bastard and a pair of audio interviews with Roquemore and Howard Jackson, both of whom have fond memories of the production.

The Human Tornado from Vinegar Syndrome is what film archiving is all about. A film that had little more than a cult following now has a definitive document of its existence and genesis. It's a beautiful world we live in. Buy this one.