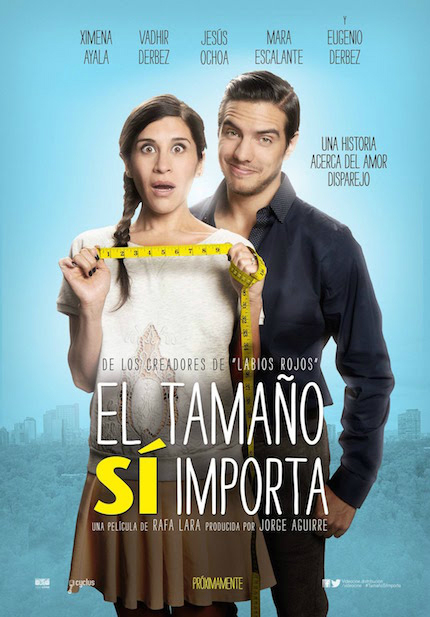 From the shameless product placement (something that, I must clarify, is now fairly common in this type of film), supposedly innovative visual resources (i.e. displaying the male protagonist’s social media outlets whenever someone takes him a photo), gratuitous musical moments (having a scene with the singer of Moenia, a popular Mexican band from the nineties), to the foreseeable and cheesy cameo of a long-haired Eugenio Derbez that’s clearly only there for the “father and son together” moment; this is the kind of Mexican effort that’s quite unbelievable for all the wrong reasons. Then we have the actual notions that come along with the formulaic story…

Derbez Jr. plays Diego Suárez, a celebrity who has “everything”, including tons of media attention, a cool car and a voluptuous girlfriend. Yet he will quickly lose all (the money, the friends, the girl) due a situation that even puts him in the softest prison ever. On the other hand, Ximena Ayala’s character, Vivi, is the common girl who loves Diego, her boss prior the criminal incident, but has always remained completely unnoticed. So if Diego ended in jail, nothing is impossible, hence the script will eventually put this rich kid in the same not-very-luxurious neighborhood where Vivi lives. The rest is simple.

It’s another raunchy comedy disguised as a harmless fable with two persons of different social class learning to love each other, and then falling apart only to reconnect in public. The film thinks the end justifies the means and sure, it sends a message that women should not be depended on men, in particular if their boyfriend is false and ungrateful (which is the case of Vivi). What’s baffling is that Diego is kind of always embarrassed by the fact that Vivi is an “average” girl and right before his early redemption begins - as he finally accepts dating her because she truly cares for him -, he urges her to change: why don’t you do some exercise or go to a beauty parlor to look better? Only then, and also after having some drinks, he will make out with her. And that’s apparently a very “feminist” rom-com, just as the creators presented it at the festival.

Do you feel this content is inappropriate or infringes upon your rights? Click here to report it, or see our DMCA policy.
El Tamaño Sí ImportaEugenio DerbezGIFF 2016Guanajuato International Film FestivalMexican cinemaRafa LaraVadhir DerbezXimena Ayala