Blu-ray Review: THE IMMORTAL STORY Explores the Nature and Necessity of Storytelling 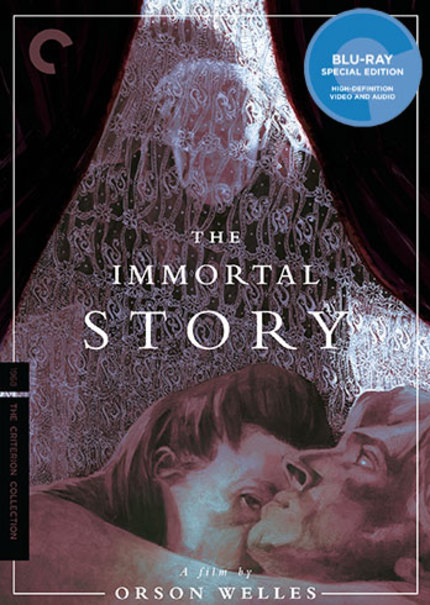 The Immortal Story, one of Orson Welles's final films as a director, is a fascinating look into not only the necessity of storytelling, but also his own obsessions with truth and illusion.

From the very beginning of his career as a performing artist, Welles was pushing the edges of what was expected and acceptable in entertainment. From his mass hysteria inducing radio performance of HG Wells' The War of the Worlds in 1938, to the dangerously subversive Citizen Kane in 1939, all the way through to his oblique treatise on the nature of truth in storytelling and magic F For Fake in 1974, Orson Welles was never satisfied simply telling a story, it needed to say something about the form in order to gain his interest.

And when it did gain his interest at a base level, you knew you were in for something special. This 1968 production for French television was based on a short story by writed Karen Blixen, and it very much addresses Welles's relationship with the oral tradition as displayed in his own films.

An aging Western businessman in 19th century Macao - at the time a Portuguese colony - feels and fears his own mortality. When his only friend, a Jewish bookeeper who keeps him company, reads him a prophecy from his own library, the merchant, Mr. Clay, becomes enraged at the idea of someone telling him that his future is already written. Clay insists that the only stories worth telling are those that have already happened, at which point he launches into a story about a sailor hired to impregnate the wife of an unnamed merchant that he'd heard on his travels.

The bookeeper, Mr. Levinsky, has the unique displeasure of explaining to Mr. Clay that this is an old sailor's story that lives at sea as a means of giving sailors something to look forward to at the end of their travels. Upon hearing this revelation, Clay decides that the only way that he can continue living is to put truth to this apocryphal story, and so he sends Levinsky out on the errand of arranging the necessary players to stage a real life performance of this immortal story. Levinsky gathers an over the hill courtesan to play the part of the wife and Clay finds his sailor along the beach as the story dictates. With all the players in place, all that's left is to inform them of their roles and watch the play unfold, but it's never that easy.

By this time in Orson Welles's career he was no stranger to reinterpretation of stories. He'd made a life of telling the stories of others through his own words and actions, The Immortal Story is no different. Welles as Mr. Clay represents the intrasignent and simple-minded audience that the director always found himself fighting.

Whereas the whore, played by Jeanne Moreau, and the sailor, the first film appearance of Norman Eshley, are there to demonstrate that stories can only live if they are given room to develop on their own. The sailor and the whore live their own version of Clay's story, in spite of the fact that they were simply contracted to perform a specific duty, they find themselves falling in love when they are supposed to be writhing in lust. And so Clay's experiment falls apart.

The Immortal Story is a perfect example of Orson Welles's attitude toward storytelling and its necessity in the real world. There is a need to believe in magic and the unknowable in Welles's work, there is a need to allow oneself to surrender to the storyteller in order to fully embrace the experience.

With Clay, the aging merchant feeling his own mortality, the magic is gone, the ability to let go is gone, he wants and needs control over his world in his final moments, so he hires these people to fulfill his own needs. With The Immortal Story Welles reminds the audience that stories cannot be forced, your desires cannot be conscripted to players in the real world. No matter how many times a story is told, it will be told differently every time, and it is in those differences that the humanity exists, not in the story's sameness from bard to bard.

This film, since it was made for television, is only sixty-two minutes long, but it manages to condense a lot of very complex ideas into that brief running time. The Immortal Story is a film that I had no idea about before I volunteered to write about it when it was offered to me, but it is a fascinating project, especially for those with some knowledge of Welles's prior work and general attitude toward the act of storytelling. This is definitely one to put on your radar if you haven't seen it yet; I highly recommend it.

The Criterion Collection's Blu-ray presentation of The Immortal Story is as good as one might expect. The original 35 mm elements were transferred in 4K and cleaned up with a brand new 1.66:1 presentation on this disc, which is interesting considering the film was shot for television, which would have demanded a 4:3 aspect ratio at the time.

The AR on this disc is certainly in line with European theatrical films of the time, so I'm going to give it a thumbs up. The audio is crisp and clear with dialogue never muddled and always easy to understand. There are no FX to worry about so I'd say the A/V presentation is quite good. In fact, if anything, the increased resolution of the picture does Welles's age makeup a disservice as it looks quite dirty on the disc.

There are several interesting bonus features included with the disc, but I found one in particular to be especially watchable, that is a 40 minute French documentary shot during the filming called Portrait: Orson Welles. This documentary, referred to as "oblique" in the disc menu, is quite something to watch. As one might expect from '60s French filmmakers, the film is very aware of the devices of the French New Wave, and utilizes the non-linear editing and abstract composition of those filmmakers to an amusing degree.

The documentary takes Welles and his body of work incredibly seriously, in fact it is obvious that they take his work far more seriously than he does. Welles comes off as an affable, jolly old man of cinema, happy to talk about his work in layman's terms. There is a mesmerizing/terrifying two minute montage of Welles laughing that is edited into the first five minutes of the doc that is mind-boggling. It's a fascinating documentary that does allow Welles to expand not only on his theories about cinema, but also his day-to-day life - we get to see him crafting his own salad, which reminded me of the sequence in Penelope Spheeris's The Decline of Western Civilization: The Metal Years in which Ozzy Osbourne is interviewed while cooking eggs - that serves no narrative purpose, but the conversation gives the viewer insight into Welles persona.

Beyond that magnificent documentary there are a few other extras that are also quite interesting. An interview with the director of photogrpahy on the project, Willy Kurant, is fascinating in it's exploration of Welles strategy for framing and his precision. An interview with Norman Eshley describes the young performer's anxiety in being thrown into such a major project with Orson Welles and Jeanne Moreau. Another great extra is a 2009 audio commentary from Adrian Martin that is informative, but suffers from a formality that doesn't mesh with the looser tone of the rest of the material.

I loved this film, in spite of being a bit intimidated at first, and definitely recommend it to Welles fans and cinephiles alike.