What The Film Festival Review: NOVA SEED, What Wonders One Man And a Pencil And Paper Have Brought 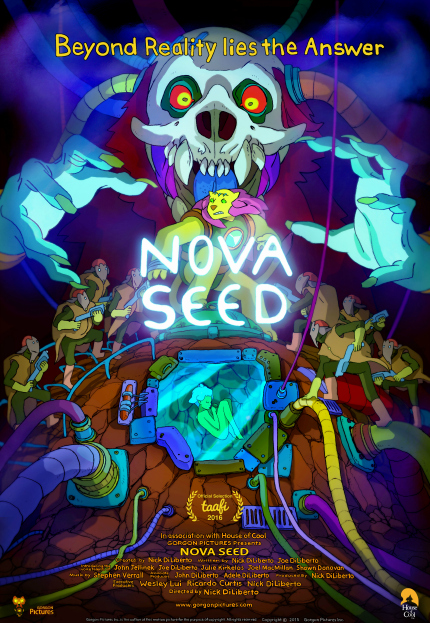 An alien planet is on the verge of collapse. Less and less of the surface becomes habitable. Society degrades to entertainment at the coliseum, watching matches between gladiators and creatures called NACs (Neo-Animal Combatant). Hope lies in discovering the Nova Seed, the last chance to restore the planet and its eco-system. However, the evil Dr. Mindskull hunts for it as well, hoping to wield its power to put the last remnants of the alien society under his thumb.

When the location of the Nova Seed is found we learn that a particular NAC, a lion-human hybrid, is the key to opening the holding cell and releasing it. NAC is forced to escape with the Nova Seed, the chase leading across barren wastelands and bringing in more bizarre characters. When the Nova Seed is finally activated will it mean the end or a new beginning for this alien world?

When people say, “They do not make them like they used to” it can be to lament the passing of a traditional method of doing something. Canadian animator Nick DiLiberto can confidently say, “I did”.

The Hamilton, Canada raised and Japanese based artist’s animated feature film Nova Seed was painstakingly hand-drawn, by himself, then scanned and finished with all the bells and whistles that digital post-production offers, over a period of four years.

With an artistic style that beckons back to the worlds created in Heavy Metal from 1981 and character designs from, say, 1968's Yellow Submarine (Submarine’s animation director Robert Balser also worked on Heavy Metal) and whiffs of Japanese anime, it is a wildly imaginative world full of creatures both familiar and alien.

Nova Seed is also an ambitious adventure film, with a terrific air combat sequence as its centerpiece, the hour is chock full of action, often with sound effects supplied by DiLiberto, like the ‘ping’ of a sword sticking in stone or the gatling gun spitting fire from NAC’s escape ship. It all culminates with the fight against a great creature of Ghibli-esque grandeur and fearsome size.

Nova Seed transported me in many ways. It transported me to a strange alien world inhabited by strange humans, stranger aliens and awe-inspiring creatures. It transported me back to Grade 8 art class when we were about to watch Heavy Metal and my teacher turned to me and said, “Don’t let your parents know we watched this, Andrew” (my parents not in tune with her New Age approach to the use of pencil and pap-“Are those boobies?!?”). It transported me to Saturday mornings try to squeeze in as many cartoons before my parents touched base with Greenwich Mean Time.

If you have ever come out of a screening of a big studio production and said, ‘Boy I wish I knew how to do that, but I don’t know how to even begin with a computer”, here is an animation style that you can do. This is not a revelation, but a revolution, bringing animation back to the working class (fully aware that countless and talented computer artists work endlessly and thanklessly to bring our families the latest batch of fairy tales with cutsie anthropomorphic creations backed by a full lineup of stuffed animals, backpacks and lunchboxes, coloring books and a long line of lackluster straight to video abominations).

In its fringe crudeness, Nova Seed is an animated film that feels… within our grasp. It is a film that can inspire anyone to grab a pencil and paper and draw something. Nova Seed brings animation back down, into the rich earth, to it’s roots. It is like rediscovering the Lascaux Cave Paintings, bringing us back to when it was just the raw materials in our hands and the wall in front of us.

In an age where animation has been digitized, sanitized, polished to a sheen I love the awkwardness of the movement in Nova Seed. I love how open, honest and exposed this felt. As if DiLiberto is saying, here is my story, warts and all. The animation may not be entirely fluid, you may titter at my homemade sound effects, but by golly I will entertain you.

And entertained I was, smiling with child-like wonder all the way throughout the screening.

Toronto boutique animation group House of Cool are currently working at balancing out Nova Seed’s finish and sound (the audio fell out of sync near the end during our screening). It screened at the festival as a Work In Progress.

Do you feel this content is inappropriate or infringes upon your rights? Click here to report it, or see our DMCA policy.
Nick DiLibertoJoe DiLibertoShawn DonovanJohn JellinekAdventureFantasySci-Fi