Review: THE INFILTRATOR, A Decent Hero in a Decent Movie 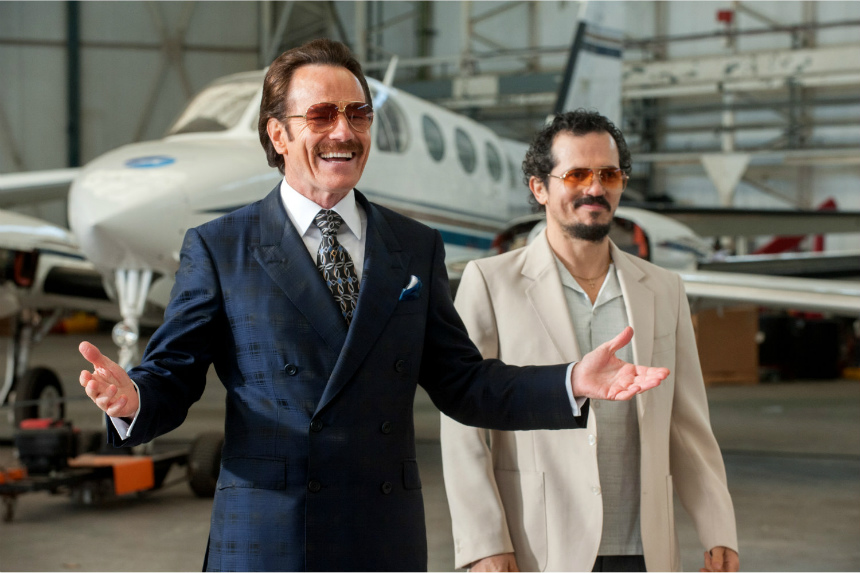 As played by Bryan Cranston, Mazur is an all-American good guy, an exceedingly decent man who is also a top-notch U.S. Customs official, an honest and dedicated employee, a loyal and loving husband and father. He refuses to cut corners in his line of work and resists all temptations that come his way, including those of a financial or sexual nature.

He is, in other words, not at all what we've come to expect from undercover agents in motion pictures produced by Hollywood studios.

The leading character in The Infiltrator is based on the real-life Mazur, who wrote about his experiences in his memoir of the same title. Mazur spent five years undercover, posing as a money launderer with connections to the Mob. His job was to infiltrate Colombian drug cartels, making contact initially with dishonest bankers and then slowly inching his way to the top -- or as near as he could get.

Adapted for the screen by Ellen Brown Furman, the movie begins with Mazur on an undercover assignment in Florida. He suffers a minor injury that nonetheless qualifies him for early retirement with full pension. Yet he doesn't talk to his supportive wife Evelyn (Juliet Aubrey) about the possibility, even though she worries about him constantly. 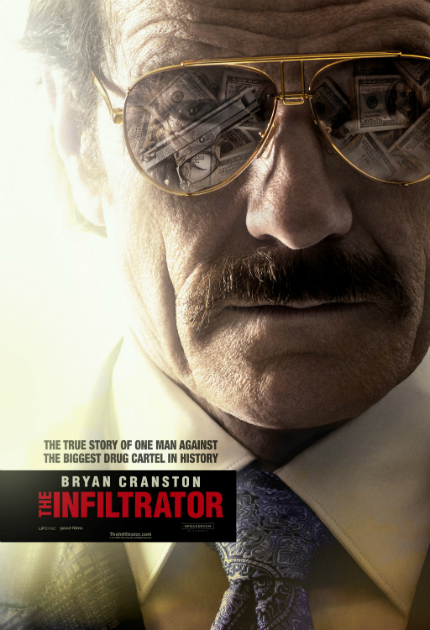 Instead, he plunges onward to his next assignment, one that will take him deeper into a drug cartel run by the notorious Pablo Escobar. Initially, he is teamed with Emir Abreu (John Leguizamo), who is everything that Mazur is not. Abreu rejoices in the opportunities for bad behavior that are available to him and makes no apologies for his conduct. He views his actions as necessary for his criminal alter ego, so that he can easily pass for what he pretends to be.

Abreu is, in other words, exactly what we've come to expect from undercover agents in motion pictures produced by Hollywood studios.

The dichotomy of the characters drives home Mazur's heroic status. He gets the job done without doing the things we've come to expect from undercover heroes. From a certain point of view, it's understandable, since he's a money launderer, not an assassin for hire. Mazur's upright stance is laudable: he has morals and he willingly and happily sticks to them.

The Infiltrator, then, is a throwback to classic Hollywood productions of the 1940s and 50s, updated by modern-day profanities and occasionally bloody, though not excessively explicit violence. When Mazur makes reference to a fiancee, for example, as an excuse to avoid taking drugs in a nightclub, he must then deal with the complication of an agency-supplied fiancee, Kathy Ertz (Diane Kruger). Mazur is tested, but we suspect he will prove faithful.

That's what heroes do, after all: they remain faithful to their wives and they don't take drugs and they conduct themselves honorably at all times. And they still get the bad guy.

Cranston only has a couple of layers of emotion to work with, but he's a pleasure to watch in a leading role. Leguizamo makes the most of his juicy bits. Kruger paints a convincing portrait of an inexperienced yet intelligent and intuitive agent. Benjamin Bratt and Elena Anaya are fun to watch as a loving criminal couple. Amy Ryan doesn't have enough to do as Mazur's boss. Brad Furman (The Lincoln Lawyer, Runner Runner) directed in journeyman fashion.

The Infiltrator proves to be a very low-key affair, with occasional outbursts of emotions and actions, probably like most undercover drug operations really are. The apparent authenticity is its saving grace.

The movie opens today in theaters throughout the U.S. Visit the official site for more information.

Do you feel this content is inappropriate or infringes upon your rights? Click here to report it, or see our DMCA policy.
Benjamin BrattBrad FurmanBryan CranstonDiane KrugerJohn Leguizamo