Now on Blu-ray: Grindhouse Releasing's CAT IN THE BRAIN Will Have Fans Purring 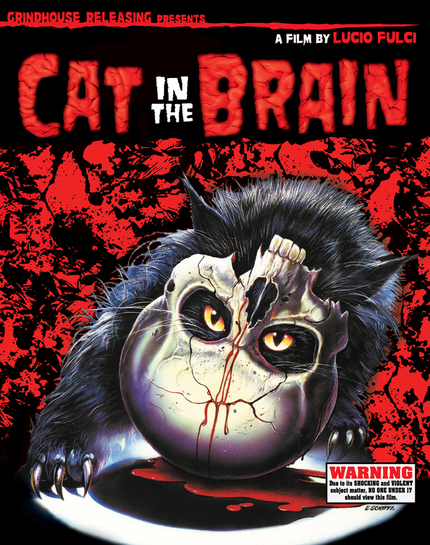 Italian director Lucio Fulci had a 40-year career that saw him working in every conceivable film genre. However, no matter how varied his work was, he will always be remembered as the Godfather of Gore.

Fulci's horror films, starting with his Dawn of the Dead inspired Zombie in 1979, are now his calling cards, in spite the of dozens of spaghetti Westerns, giallos, and sex comedies he made before. Between 1979 and 1989, Fulci's work created a template for visceral violence and explicit gore on film that other Italian filmmakers worked hard to emulate. While the returns diminished over time as illness began to take some of his facilities, he managed one final masterstroke to share with the world, the meta-horror of Cat in the Brain.

In Cat in the Brain (Un gatto nel cervello) Fulci plays himself, kind of. Fulci the horror film director plays a horror film director named Lucio Fulci who is beginning to lose track of the dividing line between reality and the fantasies he creates in his increasingly demented films. When Fulci finds himself grasping for a firm hold in reality and frequently failing to do so, he begins to visit a psychiatrist to help him work through his recent condition. Meanwhile, all around Fulci people begin to turn up dead, and not just dead, but brutally murdered, like scenes from his movies.

When the police get involved, it's only natural that Fulci becomes a suspect in these killings. Has he finally cracked and lost his grip on reality? Are his increasingly violent dreams trying to tell him something about his murderous fantasies? Will anyone close to him get out of this killing spree alive?

I'm far from an expert on the long and varied career of Lucio Fulci. In fact, my experience is entirely limited to his horror output from 1979-1990. However, even in that small section of his career there are a number of truly essential films that belong on every horror lover's shelf. Cat in the Brain is toward the lower end of the "classic Fulci" spectrum, but that still puts it pretty high on the must-own list for fans of the genre.

By the time Cat in the Brain was released, Fulci's output had become notably weaker when compared to the balls out insanity and frequent flights of surreal fantasy of his earlier horror classics like Zombie, The Beyond, and House By the Cemetery. However, for fans, it's quite a revealing look at a talent that had been largely kept under wraps by the second half of the '80s. This wasn't Fulci's last film, that would be 1992's Door to Silence, but is is his last good film, and potentially great depending on the constitution of the viewer.

The film features all of Fulci's well-documented fetishes, explosive zooms, over the top gore, and explicit violence. However, it never quite makes it over the hump from very good to great, and if it weren't for the meta-subtext of including Fulci himself as the protagonist, it would likely have been just another time-killer. However, Fulci performs remarkably well, and the film is all the better and more believable for it. Cat in the Brain is a must-own for fans of the director, for everyone else, though, your mileage may vary.

Cat in the Brain is presented on Blu-ray by cult film specialists Grindhouse Releasing, who have another winner on their hands with this release. The film was initially shot in 16mm and later blown up to 35mm for theatrical presentations. The process of blowing the film up leads to unavoidable degradation of the image, but Grindhouse's restoration is about as good as it's going to get.

It's clear that they didn't have ideal elements to work with for this disc, but it's still quite good and after a few minutes you get accustomed to the quality and it looks great. Damage to the materials is minor and the colors and clarity are pretty good considering what they had to work with. I will give it this, I've seen this film on VHS and DVD before, and this time around it was like watching an entirely new film. The film is also presented in both the original Italian and English versions, both were dubbed as was the custom in Italy at the time, and both sound pretty good.

Grindhouse Releasing have made a name for themselves in the cult video market over the last 20 years not only for their preservation and restorations, but also their commitment to providing complete packages for their films and Cat in the Brain is no exception. This disc is loaded with interviews and making-of featurettes that add up to hours of summplemental material sure to satisfy even the haughtiest of fans. Among the interviewees are star Brett Halsey, composer Fabio Frizzi, artist Enzo Sciotti, screenwriter Antonio Tentori, and cinematographer Sandro Grossi, all of whom provide a wealth of backstory for their work on this film and many others.

Perhaps the most interesting pair of interviews for me was a couple with Fulci recorded for TV. The two interviews, split into one segment covering his TV work and a second covering his work in genre film beginning in the '70s, show Fulci at his fiercest. A defender of his work and the great Italian masters that he felt had been given the shaft by the international film community. He talks about how brazenly Hollywood ripped off Italian cinema (a curious turnabout considering the generally accepted fact that the vast majority of the post '50s Italian film industry was based on Hollywood knockoffs), as well as trying to cement his own (rightful) place in Italian cinema history. It's great to see him talking with such passion, and this disc, along with Mondo Macabro's A Woman in a Lizard's Skin Blu-ray have done a lot to keep his memory alive.

The disc is padded out with some footage of Fulci at a 1996 Fangoria Weekend of Horrors events and live footage from Fabio Frizzi's recent Frizzi 2 Fulci tour where he played the Cat in the Brain theme. Speaking of Frizzi, we also get a CD containing the soundtrack for the film, in what has become a welcome habit from Grindhouse. Lastly, there is a wonderfully insightful booklet filled with scholarly essays from Antonella Fulci, Eli Roth, David J. Schow, and Martin Beine. Grindhouse regularly includes booklets with their discs, but this is unquestionably the best and most informative yet. Well done.

Cat in the Brain is a no-brainer for Fulci fans. This is the best looking, most complete, and most lovingly crafted presentation of the film to date, and one that fans will have to own. For horror geeks to whom Fulci isn't a household name, it's not the greatest place ot start, I'd recommend Zombie or The Beyond to get your feet wet, then circle back around and Cat in the Brain will make a lot more sense. Either way, this set is a definite winner.

A Cat in the Brain