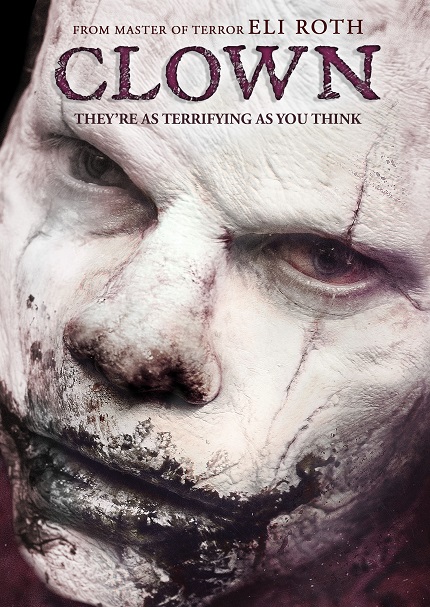 The journey for Jon Watts' Clown has been very, very long. It was filmed just over in Ottawa in 2012 after Watts made a fake trailer for the film. Then Clown premiered on the festival circuit over a year and a half ago at the beginning of 2015.

Even the success of Watts' next film, the festival darling Cop Car, did not seem to be enough to get Clown out into the public's hands any sooner. Today we can finally share with you the announcement for the Blu-ray and DVD release next month, on August 23rd.

Producer Eli Roth (Knock Knock, Hostel franchise) and director Jon Watts (Spider-Man: Homecoming, Cop Car) team up to bring audiences a haunting twist on the scary clown.  Clown arrives on Blu-ray™ and DVD August 23 from Dimension Films and Anchor Bay Entertainment.  From a screenplay co-written by Watts and Christopher Ford, the film stars Laura Allen (“Ravenswood,” “All My Children”), Andy Powers (In Her Shoes, “Oz”) and Peter Stormare (“American Gods,” “The Blacklist,” Fargo).
Clown is a story of a loving father who dons a clown outfit and makeup to perform at his son’s sixth birthday, only to later discover that the costume – red nose and wig included– will not come off and his own personality changes in a horrific fashion. To break the curse of the evil outfit, the father must make grim choices with his own family facing danger.
Clown will be available on Blu-ray™ and DVD from Anchor Bay Entertainment on August 23, 2016 for the suggested retail price of $26.99 and $22.98, respectively, and includes “Making Clown Featuring Producer Eli Roth.”