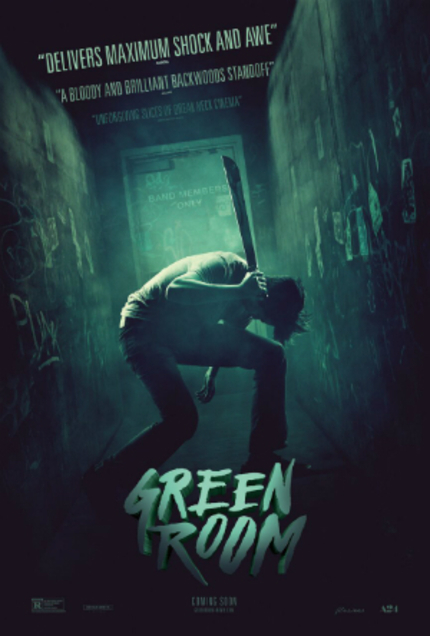 Some gigs really aren't worth taking. That's a maxim that the members of broke touring punk band Ain't Rights probably haven't heard of and certainly aren't going to adhere to when they get offered $350 to play a backwater skinhead bar.

That's more than enough money to get them all the way home without needing to syphon any more gas. They've played to plenty of rough crowds before, so what could go wrong?

Green Room starts out as a pretty typical band on the road movie, but quickly transforms into something very, very different. When the band witnesses something they're not supposed to see, things go from dangerous to downright deadly. And along the way, much, much blood is spilled and many internal organs are exposed to the light of day.

Billed as Jeremy Saulnier's follow-up to the impressive indie Blue Ruin, Green Room takes the intensity on display in that film and ratchets it up by a few million dollars. The extra money is all on the screen. With a larger cast, bigger sets and set pieces, and a hell of a lot more special effects makeup, Green Room is every bit the follow-up that fans of Blue Ruin have been hoping for.

Macon Blair is back and just as excellent in his role as the proprietor of the skin head music venue. But this time he is joined with a few more recognizable faces. Most notable is Patrick Stewart as the boss; his badassness exuded in his calm Picard-esque confidence. The good guys include Anton Yelchin, Imogen Poots, and Alia Shawkat, while both Mark Webber and Kai Lennox turn in great performances as skinheads. Truly all the performances are strong and Saulnier easily proves himself with a larger and more professional cast.

While it's not exactly a horror movie -- it's probably best described as a siege film -- horror fans will find much to enjoy. The special effects makeup is fantastic and Saulnier comes up with many opportunities to employ it with plentiful use of machetes, box cutters, and shotguns. And when the pit bulls show up, gore hounds know they're really in store for a treat. This isn't a typical CG blood thriller and the use of effects are a perfect example of where giving Saulnier a bigger budget translates directly to more awesomeness.

Awesome really is the best way to describe Saulnier's filmmaking style. Smart, assured, and clever are all accurate as well. Green Room is all of those things in spades and proves that Saulnier is one of the most exciting genre directors around. Now let's see what he can do next.

Review originally published during the Cannes Film Festival in May 2015. Green Room opens in select theaters in New York and Los Angeles via A24 Films on Friday, April 15. It will expand across the country on April 29.

Do you feel this content is inappropriate or infringes upon your rights? Click here to report it, or see our DMCA policy.
Alia ShawkatAnton YelchinImogen PootsJeremy SaulnierMacon BlairPatrick Stewart

..I THINK i'm REALLY Excited about this one....
....I know. Sounds dumb.
..but, there's SOMETHING about this that i'm still on the fence about.
(can't put my finger on what though.).

I keep wondering how Jake and Elwood would get out of there.