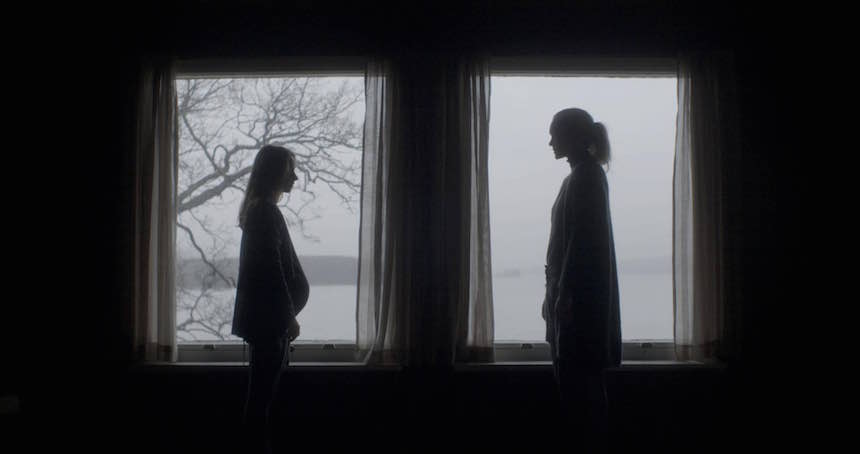 A classy, atmospheric take on the hysteria of new parenthood, Ali Abbasi's Shelley wears its influences boldly on its sleeve (and right there in the title), only the Frankenstein's monster here is a baby born by way of our modern medical miracles.

Louise and Kaspar are a thirty-something couple well along in their successful twentyfirst century careers. They have chosen to live in the pleasant isolation of a picturesque lake (pregnant with islands) in the Danish countryside. Enabled by their wealth and privilege, they grow their own food and even forgo using electricity for the sake of simpler, slower living.

The only thing missing from their life is that they cannot biologically have children. When a young Romanian housekeeper, Elena, arrives on their dime and quickly bonds over wine and intimate conversation, Louise appeals to her to act as a surrogate mother. The delicacy of such an interaction is not lost here, and some of the films best work takes place in the psychologic set-up between two very different women.

I have no doubts these kinds of proposals happen in real life and perhaps they go professionally and smoothly as they possibly can. When they happen in the movies, any astute viewer knows things will not go anywhere near according to plan. The offer to Elena is thus: instead of her working for them for two or three years in Denmark, they will give her enough money to afford to return to her own young son (and extended family) with enough money to buy an apartment in Romania and make a step up in her current family lifestyle. Elena would need to lend her womb for nine months or so to one of Louise's frozen eggs thereby artifically inseminated by Kaspar's seed, and carry a child to term for them.

The director establishes the misty lake countryside early in the picture (blessedly bringing back the slow zoom!) perhaps to evoke the insular isolation where Mary Wollstonecraft Shelley hung out for the summer in 1816 with Lord Byron, Percy Shelley and a few others whereby she conceived her iconic novel on the modern Prometheus. She effectively realizes Elena and Louise, the former, a practical minded but open girl and somewhat experienced mother who quietly scoffs at Louise's license towards spiritual healers, crystals and other new-age paraphernalia.

Elena's patience begins to be seriously tested as Louise starts to take over responsibility for her body as the baby grows. A glass of wine or snuck cigarette, a rash or even Elena's weight sizzle with conflict, and the tension between whether or not to go to doctor is palpable. Who owns what in this transaction of bodies and life?

Louise's perceived anxieties over new motherhood in someone else's body starts to push the tone towards a favourite cross-cultural, upscale freak-out film of mine in recent times, Magic Magic. However, in a bid that fails to address so many consequences of this first and second act build, the writer-director seems to say, to hell with the consequences, I'm going to pack another film in the final act. Now I like that other film, in fact, I'd love to see another hour of that other film, but really, I question the motives and intent to not deal with what is so elegantly set up in the initial core thesis of the film.

It takes a rare filmmaker to pull off a Psycho or an Audition, and a bold attempt is made in this, Abassi's first feature, but it leaves too many details unaddressed. For the record, I am not one to dwell on plot holes if the artistic choices are daring and yield treasure. However, with the careful tone of the film so meticulously established, is smashed by a its third act yank with a more slavish pandering to genre conventions (however upscale in their execution!)

Realistic characters simply go too far, too fast and the last act felt too rushed to this viewer. I get the notional that parenthood radically changes everyone who attempts to do it right; it certainly does. But it does so gradually, and the process involves a village, no matter how isolated your choice of lifestyle. Patience is a virtue.

There are, nevertheless, many effective images (one involving Leo punching the air several times, another involving the return of the new age shaman to consider the child) that brings in the male side of things, and together there some superb interpretations of how motherhood and fatherhood are never exactly how you would imagine it, particularly the stress levels when you are doing it on your own. But so much potential is left on the table here.

And I have to be *that* guy who points out one of the films key supernatural elements involving water (baptism) and pain. Because the hospital, birth and hand over of the baby is glossed over, I find it rather lazy that the screenwriting and filmmakers never address how you kind of have to bathe the baby a few times before discharge.

In her rush to examine the themes of parenthood, she forgets to glue things properly together. I would say this might not bother me for many films bud it did for this one. If your film is about consequence, perhaps one might be wise to consider the consequences of not considering the consequences. This film would require at least another hour to do so. And I wish could have spent another hour with the quality front-loaded, character based filmmaking that Ali Abassi is clearly capable of.