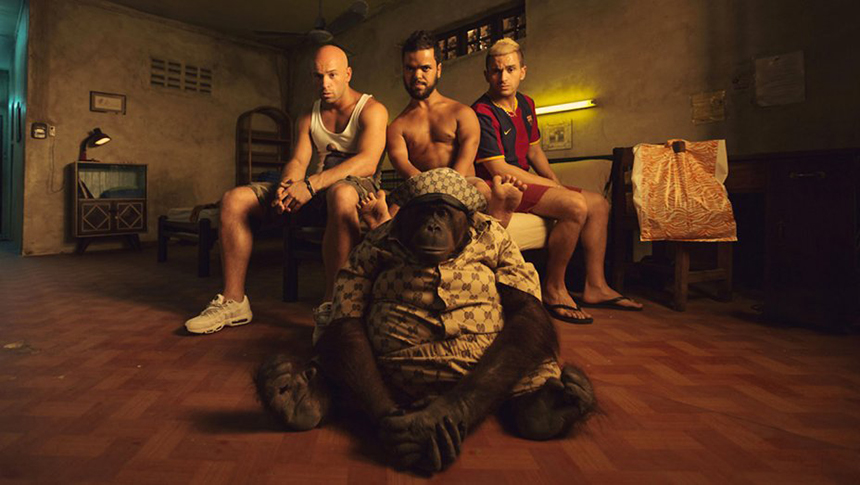 Franky is all forlorn when his girlfriend breaks up with him. He would be almost inconsolable had his friend Krimo not suggested they get out of Paris and go on a trip to Thailand. Specifically the resort town Pattaya, known for it wild sexy nightlife. Thing is, when you are a broke Parisian how can you afford to go? Krimo finds a invitation online from Thai boxing school, for little people. The master of this school, known simply as The Moroccan, will pay for anyone to bring their best little person fighter to match up against his. Now all Franky and Krimo need is a little person.

Fortunately for them, Le Nain, a devout Muslim, lives in one of the buildings nearby. Thus, they begin to plan, and a series of misadventures begins.

I will be the first to admit that I went into this screening of Pattaya blind and with the politically incorrect motivation of watching little people do Thai kickboxing. I knew nothing of Gastambide's first film or his acting career. When I was going through the festival schedule I saw little people and kickboxing and knew I had to go. What a fortunate exposure of my latent hypocrisy.

Star and director Franck Gastambide reunites with one of his Les Kaïra/Porn in the Hood stars, Anouar Toubali, and adds a roster of French comedians for his sophomore effort Pattaya. What follows may come across as a paint by numbers comedy that reminds us of The Hangover and some of the American gross-out franchises; and it would be easy dismiss it as a carbon copy, if it were not so damned irreverent and hilarious.

From the first moments where Frank and Krimo try to ditch Le Nain at the airport to their stay at The Moroccan's compound and their escape the relationship between them is terse as Le Nain discovers the truth. But in true form to the genre they will come together and become friends and the laughs just keep on coming, including a moment of projectile everything that just slays. The jokes, prat falls, physical comedy, crude moments hit so often that you will have a few scant moments to catch your breath in between.

The moment that had me sold thought was the direct lifting of the training homage from Jean Claude Van Damme's Kickboxer. Le Nain agrees to go through with the fight after The Moroccan flexes his muscle, attacks Franky's cousin's bar, and forces the trio to commit to the fight.

Franck Gastambide proves that he is a competent director with terrific comedic timing. He also knows when to let the material do the talking and when he needs to get wild and creative with his direction, predominantly during a rave scene and the fight - itself winks and nods to Guy Ritchie and his fight work in Snatch and Sherlock Holmes). One wonders with more opportunities will he create his own style and vision. I find no fault in borrowing from others before him if the results are this laugh out loud hilarious.