BiFan 2016 Review: GRANNY'S DANCING ON THE TABLE, Beautiful and Brutal 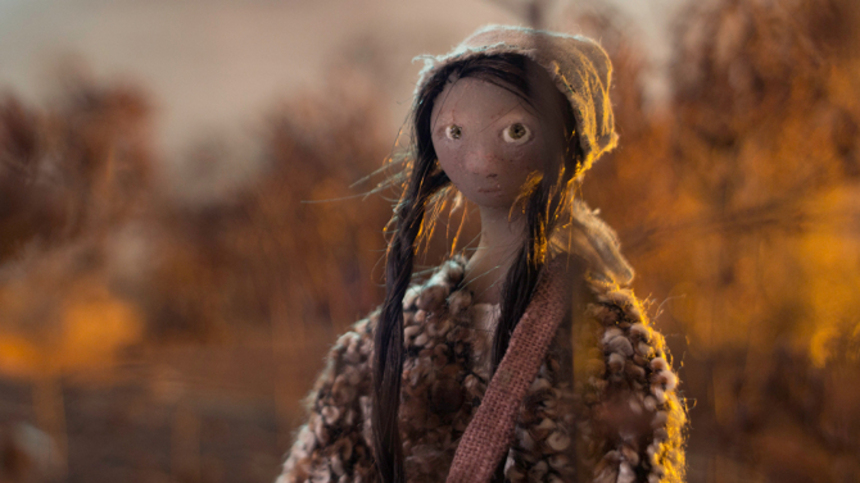 It might seem that we have choices for our life’s direction; we can choose whom we spend tie with, who we marry, whether or not to have children, our career. But often those choices are invisible to us, impossible to obtain, or simply don’t exist. We can become trapped in an existence not of our choosing, and lacking the skills or motivation to escape.

In Hanna Sköld’s beautifully executed and deeply disturbing Granny’s Dancing on the Table, two sisters are forced into a life that one wants and the other does not. The consequences reach several generations, as does a cycle of isolation and abuse. Combining live action and stop motion animation, the film steers straight into the heart of this darkness, never flinching even as it makes its audience flinch at the seemingly inevitable pain of its characters.

Eini lives with her father deep in the woods, cut off from other people. His quiet yet tyrannical parenting leaves body covered in bruises and her personality almost equally beaten down. She relates the story of her grandmother, and her grandmother’s sister Lucia, who started off together in isolation, but Granny escaped to an exciting life, while Lucia is stuck at the farm raising her sister’s child, with a husband who slowly turns to abusing her in religious fanaticism. Meanwhile, Eini slowly begins to rebel against her father and plan a possible escape.

The story of the sisters is related through the stop motion animation, as a filter from Eini’s imagination. The animation is reminiscent of the Quay Brothers; these are not pretty puppets meant as realistic depictions, but rather what someone Eini would envision. The weariness and madness of a lifetime of abuse (for Lucia) and the eventual liberation of freedom (for Granny) are reflected in the motion of the puppets, whose flexibility and exagerrated arm and neck movements convey a full range of emotion. Eini's mind cannot conceive of much of what happened to her granny, so details are sparse, yet the animation remains rich in representation of the experience.

However, Eini can imagine the brutal and enforced silent life of her father and great-aunt, and the washed-out colours and stilted movement are both a product of the rough animation, and its meaning. With no other context of the meaning of family, all Eini knows is women beaten into silence and submission, and men quietly tyrannical and brutal.

Blanca Engström, is a revelation as Eini; she knows there must be something outside of the silent suffering that has been passed down to her, but she must navigate it without outside knowledge. She may have been beaten down, but her inner anger is slowly growing, escaping both in reality and her imagination of even greater bodily harm. Sköld and cinematographer Ita Zbroneic-Zajt, as with the animation, frame Eini's forested world as beautiful and desperately lonely; the beauty of the Swedish wilderness is there, but it contains such terrible pain that even the darkest shadows cannot hide. Indeed, there are very few dark shadows, as Eini's suffering must be seen and understood.

Much of recent Scandinavian cinema has had films about men escaping 'difficult' civilzation for their own rules in the wilderness; it's refreshing to not only have a film from a women's perspective, but one that does not shy away from the the abuse too frequently suffered by women at the hands of men who have decided that their way is better, away from protection. Granny's Dancing on the Table is not an easy film, but it is original and imaginative in execution, and brutally honest.

Granny's Dancing on the Table