TERRY TEO: Look at What HOUSEBOUND's Gerard Johnstone Has Been Up To 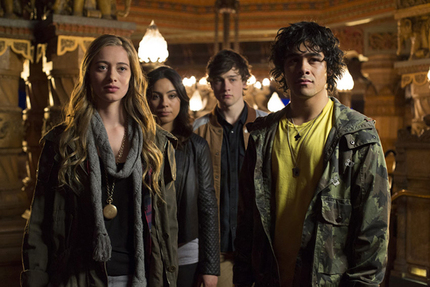 Gerard Johnstone's Housebound is arguably one of the best horror comedy films of the past decade and has kept the Kiwi director on our watch list since. Johnstone and his Housebound producer Luke Sharpe have gone ahead and adapted a New Zealand comic book character from the 80s, Terry Teo​, and the new series will debut on July 12th.

After I saw this trailer yesterday I started to do some digging. So I reached out to my relatives from the NZ and Johnstone himself for a bit more information about the source material and the new project.

One cousin definitely remembered the original comic Terry Teo and the Gunrunners but did not get into the television series it was adapted to. In fact, another source implored that I not try to watch the original show. You can see why. It was definitely meant for little kids and definitely from the 80s.

Johnstone described Terry Teo as New Zealand's answer to Tin Tin (kind of) and was very popular with kids in the 80s. However, he describes his new series as,

...it's kind of like Elmore Leonard for kids with a little Shane Blackness thrown in.

That description of course would have anyone excited, except the network TVNZ. The series may have proven to be too hot for G Rated spots on TVNZ's schedule so the network has shuffled it off on to their On Demand network. There is word they may put the show on the regular network at a later date.

Then there are the challenges of geo-blocking which could prove a challenge for Johnstone's fans around the world to work around. So this is as much a plea for networks in the UK, US and here in Canada to take a gander at the project since the rights have not been picked up outside of the double island nation.

Make sure you watch that trailer below. There are some great laughs there and you may spot some familiar faces in the supporting cast. I spotted Kimberly Crossman from Deathgasm and Rima Te Wiata from Housebound.

Do you feel this content is inappropriate or infringes upon your rights? Click here to report it, or see our DMCA policy.
Gerard JohnstoneKimberly CrossmanLuke SharpRima Te WiataTerry Teo