Review: THE FITS, New And Vital Moments Of Girlhood On The Cusp 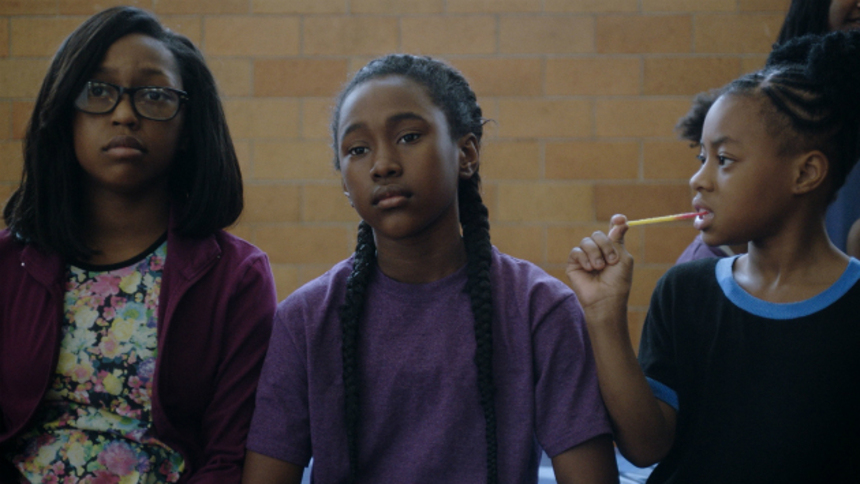 While watching Anna Rose Holmer's The Fits my sister came to mind. Four years separate us and when I was on the cusp of sixteen -- the height of angst and existentialism -- we moved to our "big" house. She had just moved back in with us after spending some post-divorce years with my father, and so, my world that was akin to a little marriage between mother and son was transformed into something closer to the amazon with tall beautiful women with big emotions and shallow silences ruling everything around me.

When we moved into our new home my mother decided that the bigger of the two rooms should belong to my sister: "Girls at this age need more space." This had me fuming, an indignity that I never really reconciled until recently because she was right. Girls do need more space, if only to make room for the many frustrations and fears that will come in the weeks and months before with "the change."

This time before "the change" is the interest of The Fits. The film follows Toni (Royalty Hightower), a strong and beautiful tomboy who hangs with her older brother in their community center's boxing gym, training alongside the boys. Every day, at the end of their workout they are visited by older, beguiling girls who are a part of the community center's award-winning drill dance team, The Lionesses, who live up to their name not only with their fierce and ferocious choreography but also in how they warble and growl through the halls, eyes bright as though in search of prey.

The girls of The Lionesses move with an untethered, lithe sensuality that exists in stark contrast to the way that Toni, lip-bloodied but determined, pulls herself up stiffly onto metal bars. It's not until one day, after a workout, that their charms seem to cause a stirring in Toni as well as her brother and his friends, and from that stirring you see across Toni's face the spark of magic moving within her. From there Holmer begins to move the story expertly and with a grace that's rare for a debut film. After Toni's brother tells her "the only way you can lose a fight is if you don't get in the ring," Toni decides to join the girls and begins to awkwardly fumble in her tomboy body through the kinetic and virile choreography of the older girls, and then as the relationships of the girls begin to cement, the unexpected happens. The leader of the girls is attacked by what looks like a seizure and from then a panic and hysteria overtakes the rest the team in ways that both frighten and intrigue Toni.

The elegance of the metaphor Holmer plays with in this film cannot be overstated. It's as though she took a look at Arthur Miller's The Crucible, ripped it apart, shaded it black, then put it back together again from the point of view of the doubting Mary Warren instead of the apoplectic Abigail. It turns a story that was a metaphor about falsely accused men and communism into one about what could move young women to "stop thinking like individuals and start thinking like a team." (This is not to say that men are out and out ignored; in one of the film's most fascinating sequences Holmer juxtaposes the many ways the boys destroy their bodies as they work toward boxing perfection with the girl's easy nonchalance)

To speak more about this mostly silent and deeply affecting film would undercut the sophisticated storytelling. The craft of The Fits is unparalleled. From Danny Bensi and Saunder Jurriaans' sparse and surprising score, to Paul Yee's dense and gorgeous framing, to Charlotte Royer + Zachary Sheets' utterly specific design, to, most importantly, the muscular and free performance of Royalty Hightower, the film ranks among the best to be released into the independent marketplace in the past half decade.

The last two years have given us wild and canonical moments of unfettered young women overtaken by the magic of youth intersecting into adulthood: Rihanna's "Diamonds" sung in blue light in Girlhood, the acid scene in Diary of a Teenage Girl, and now Toni's Rocky-moment on a bridge in The Fits. Each give us new and vital moments of girlhood on the cusp of young womanhood that is as frightening as it is poetic.

Much like my mother with my sister, Anna Rose Holmer gives Toni and The Fits the space it deserves to mull through the various indignities and pleasures one experiences as a young girl. With this space, what Holmer builds to is definitively the most triumphant and frightening ending of any film I've seen at Sundance. Let us hope it won't be the last time Holmer shares her magic with us.

Review originally published during the Sundance Film Festival in January 2016. The film opens in select theaters in the U.S. on Friday, June 3, via Oscilloscope.

More about The Fits