Review: In THE CONJURING 2, The Warrens' Second Commission Is Not As Great

The Conjuring 2 has at least two crosses to bear.

Firstly, it's burdened with being based on the exploits of a well-documented real-life demonologist couple, Ed and Lorraine Warren. Audiences expect authenticity. Secondly, it's a summer tentpole sequel for a major studio, and must satisfy in that regard. In short, the film is expected to walk both the straight and narrow but also go wide and broad.

Setting the any questions of the real-world validity of their pursuits aside, the Warrens of The Conjuring are absolutely great movie characters. Played by Patrick Wilson and Vera Farmiga, they once again imbue them with earnestness, commitment and drive. Their Warrens are people of faith on a far-fetched mission, and they know it.

They are off on their own crusade, yet remain on board with their Roman Catholic church hierarchy, even when it's difficult. (Which it often is.) They are self-proclaimed "agents of the church," a fleshed-out real couple operating in the service of a highly imperfect institution that operates in the service of the Greatest Good. The films make no bones about this.

Like The Exorcist before it, The Conjuring films hinge on audiences buying into the reality of demonic evil. At least, the film's version of demonic evil. Even the most staunch atheist can suspend disbelief long enough to enjoy a well executed ghost story, which the first film, 2013's The Conjuring, certainly qualifies as. (Strictly speaking, that wasn't a ghost. But the point is clear).

The alluring tag "based on a true story," or even the watered-down version, "based on true events," brings certain baggage with their self-professed commitment to truth. In this sense, The Conjuring and The Conjuring 2 director James Wan must be both a spook house showman and a trustworthy re-framer of alleged biography. Wan is up to both tasks, as proven with the first Conjuring, a taut crowdpleaser loaded with as much earnestness as visual trickery. 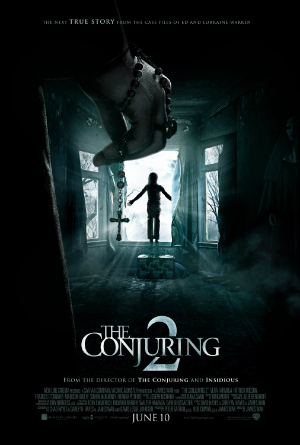 For an experienced filmmaker who still qualifies as young and trendy, Wan, whose previous film was the globe-hopping mega-hit Furious 7, is refreshingly good at cultivating a good old fashioned air of fear. With both films firmly rooted in the 1970s, the first one in an American farm house, this one in urban London, his evocation of the atmosphere of dread so common in horror stories of the era is convincing without becoming a set dressing/wardrobe/hair styling sledgehammer.

Without falling into the common trap of playing gaudy dress-up with his actors and locations, Wan has delivered two films that feel period accurate, but are also in step with today's filmmaking. His camera moves and cutting style could be employed on most any contemporary-based horror film to positive effect.

Pacing, however, proves to be a stumbling block this time. The question of why this movie needs to run 134 minutes is second only to the question of why these films are called "The Conjuring," an apropos-to-nothing title. Overlong and overfamiliar, The Conjuring 2 attempts to slow-brew it's way to an otherwise effective final climax. The trouble is, by that point, it's too little too late. The most engaging story moments come well over the two-hour mark, already too lengthy for most any self-respecting horror film. A third act twist falls under the category of "great story idea," buried far too deep in the running time.

Aside from the sheer watchability of Wilson and Farmiga as the Warrens -- characters I'd suffer though worse films than this for -- too much of The Conjuring 2 is familiar tropes and time spent with the British household that is under siege. It's based on the true-life "Enfield poltergeist" case, which spanned from 1977 to 1979. It doesn't help that the family in the first film, led by Lili Taylor and Ron Livingston, were more sympathetic. We are made to be rightly concerned about Lorraine's horrific visions of her husband's gory death, yet there's an exploitative quality about the film's repeated showings of her premonitions of Ed dying.

A few on-the-nose song cues are forgivable in a movie like this, but here there are at least three. One is "London Calling" by The Clash when the focus shifts to London. It's edited to a montage of London iconography; an early warmed-over riff in a movie full of familiar warmed-over riffs.

Non-musical riffs include these old classics: Loud supernatural banging at the door ... eerie disembodied whispers ... freaky-ghost jump scares... and a particular favorite of mine, a haunted toy truck rolling down the hall all by itself. These will ring a bell with anyone who's seen a haunting movie before, regardless of however "factual" the occurrences themselves may be. The Conjuring 2's lesser first hour would've benefited from a good 20-minute trim of these instances. The audience simply doesn't need this much convincing; they're already in their seats.

Bigger problems include questions of internal logic violations and the inclusion of a truly hokey CGI "bogeyman" that Ed must square off with. Yet, The Conjuring 2 will not be excommunicated on these grounds. There's a good Conjuring sequel in here somewhere, and a technically admirable one at that. Wan, Farmiga and Wilson bear the film's crosses well and professionally.

And if the Warrens' true-life case files are any indication, there's plenty of increasingly outlandish-sounding material for future films. Here's hoping that they get that shot at redemption.