Interview: Ken Jeong On Why SEOUL SEARCHING Is His Favorite Korean-American Film Of All Time

Seoul Searching is a dramedy that firstly present us a peculiar real-life situation that, if you are not from Korea, probably has remained unknown.

Back in the 1980's, the Korean government developed a summer program with camps that allowed the sons and daughters of Korean immigrants to actually return to their origins and learn about the culture of the place. These camps were especially important because, as we are told, since the Korean War a huge amount of people migrated to a vast variety of countries, where they established and eventually formed a family.

Korean-American director Benson Lee uses this scenario, and a bunch of teenagers as protagonists -- who travel for the first time to Seoul from places like the U.S., Germany and Mexico -- to explore such common fun situations of youth as a girl drinking way too much alcohol during a party, while also dealing with more profound issues, particularly the relation between the teens themselves and with their parents.

This coming-of-age film has the support of Ken Jeong (of Dr. Ken, Community and The Hangover trilogy fame), who functions as executive producer. Find out why Jeong fell in love with what he now considers as his “favorite Korean-American film of all time.”

ScreenAnarchy: How did you became involved with this project?

Ken Jeong: I was at Sundance for another film that I helped produce and also appeared in, called Advantageous, that was written and directed by the very brilliant Asian American filmmaker Jennifer Phang. I had met Benson Lee, the writer/director of Seoul Searching, and he invited my wife and I for a private screening of his film. I saw it and I just felt in love with that film, it’s literally my favorite Korean American film of all time… it’s really just one of my favorite movies of all time. So I told them, anything you need from me to support the film, to get the word out, I’ll be happy to. And that’s my involvement in this movie, I’m really just a big fan of it.

Back in the eighties, what did you know and think about the summer camps program in Korea?

I actually went to one of these camps in the eighties, that’s why I loved the film so much, because it’s something I related to as I had a very similar experience that same year (1986). It’s something that a lot of Korean Americans have experienced.

This movie affectively takes me back to that memory, while also gives it a twist of its own with the eighties soundtrack and the performances by Justin Chon and Jessica Van that really carry the film, as well as Esteban Ahn who plays Sergio. You have these amazing comedic performances, and also great performances by all the actors involved. The film effortlessly blends comedy and drama and it’s something I truly related to.

Now that I know you actually went to one of these camps in Korea, is there a particular part of the story that connects with you the most?

Yeah, there’s a scene with Klaus, played by Teo Yoo, in which he calls his parents in Germany and he realizes how brave his parents were making the move from Korea to Germany. I think Klaus had taken this for granted. Every Korean who grew up in another country can relate to that. I recognized that dynamic: my parents were very brave to move to America and create opportunities for themselves and the family. To me that was done in a very unique way, in the eyes of a Korean who grew up in Germany, and thought it was really inspiring and moved me to tears. The beauty of that scene is that you never see Klaus’ face, it’s a simple and beautiful shot… just my favorite scene in the movie.

Parenting is a very important theme in SEOUL SEARCHING. As a father, what did you learn from the film?

It’s a reminder not to take life and each other for granted, that’s kind of the theme of this in general. In life you’re always searching for something, you’re searching for a goal, for something material or an achievement that completes you; and (the film) is a reminder to take a moment and think that at the end of the day, is really the ones that you love that complete you. To me that’s a very universal theme of this movie. It’s called Seoul Searching for a reason, and searching within yourself you can find the real answer of what is the key to happiness. 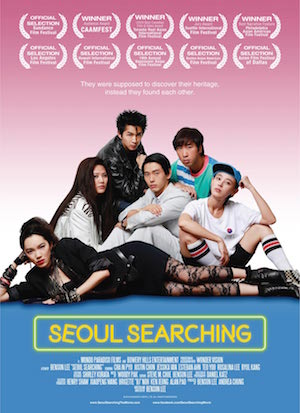 You mentioned already how the film is colorful, with the eighties soundtrack. Why do you think Benson Lee decided to go for this style?

Benson uses the soundtrack very effectively, right when the opening scene of the movie takes place in Korea and then you hear The Clash, it just takes you back, you are just right there, that’s it, pretty much defines the movie! It’s pretty amazing.

How meaningful was to see such Korean spots as the Joint Security Area in the film?

I think in general what Seoul Searching really highlighted was that when I was a kid in these camps, to me it was important going by the countryside and seeing different aspects of Korea, not just Seoul. That was the take on point for me when I went to these camps; I thought: “this is who you are.”

The film starts telling the audience about the Korean War and how it affected a lot of families. Can you talk about this context

I was born in America but I grew up knowing family and friends who went through the Korean War. The whole movie serves as a historical template of where we all came from.

Finally, to repeat one question that is asked to the characters in the film, what does it mean for you to be Korean?

What it means to be Korean for me is family. The themes of family recur over and over in this film, in different ways and points of view. Seoul Searching is about family, universally, and love of family.

Seoul Searching opens theatrically in New York City on June 17 and in Los Angeles on June 24. More cities should be announced soon.