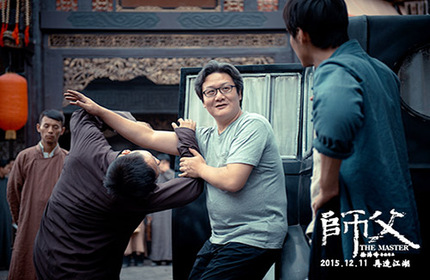 A director who’s won awards as a screenwriter, martial arts choreographer and literary novelist, Xu Haofeng seriously believes in multitasking.  The writer of Wong Kar Wai’s The Grandmaster and Chen Kaige’s Monk Comes Down the Mountain, Xu sits in the director’s chair for The Final Master, the latest piece in his collection of “cold weapon” films, spotlighting the use of traditional Chinese knives in battle.  Director Xu spoke with me about adapting his own novels and mixing philosophy and politics with his kung fu.

The Lady Miz Diva:  THE FINAL MASTER is the third in a trilogy of adaptations of your own novels.  I often hear filmmakers talk about the difficulties in adapting literature.  What was it like for you adapting your own work?

Xu Haofeng:  Actually, for me this is a very interesting process because I was a film school student learning filming and directing in the past.  In that process, writers and directors were educated together.  If the writer and the director are two separate people, what will happen most of the time is they will definitely have different perspectives and views and understanding of different things, so that is why there will be a lot of conflict and also compromises through the process.  But for me, because I am the writer and director, that makes it easier and I don’t really have to deal with those kind of conflicting results.

LMD:  When you were writing the books on which the films are based, did you envision them cinematically?

XH:  I was thinking about a feature even while I was writing the short stories.  I think this is a process to self-protect the whole thing, because when you have a short story that has won a lot of different important awards, it actually added a lot of credibility to this project itself, so I was envisioning it being adapted to film.  I really enjoyed that part.

LMD:  In creating a visual illustration of your own words, does it cause you to see the ideas you wrote differently?

XH:  Actually, when writing the novel, I already knew there would be a lot of differences because they are two different formats of art.  When I wrote the novel, I followed the rules of literature, and when I was doing the film, I followed the cinematic language and all the visual rules in my imagery.
I wondered if in Europe and in the US, a person who can be a director and who can be a writer - a novelist or literature writer - is kind of like a rarity?  But in the 60s, in France, there were really a lot of people coming out like that.  They can both be literature writers and also the directors of film.  But when I was getting my film directing education in my early years, that generation of educators really liked this idea from the 60s in France.  So, that is why, from their imagination and also their love for that type of way of doing film, they turned me into a person like that.  So, basically, that’s how I became who I am right now, writing both novels and also directing movies.

LMD:  In THE FINAL MASTER, the knife fighting isn’t just a cool looking cinematic choice.  As you mention in your director’s statement, it’s a conflict of territorial ideologies.  Was this a challenging concept to portray on film for those who might not understand that important aspect?

XH:  This type of knife fighting hasn’t really shown on screen that much.  In the past 40 years, martial arts films from Hong Kong have really focused on showing and presenting the beauty of martial arts movements and action.  In the US, filmmakers have already learned that technique and that has been used in a lot of different movies in that type of genre, as well.  But, for me, I really want to show the real stuff; realistic fight scenes and also realistic fight motivations as you mentioned, in this movie.  The pair of knives, which is the main weaponry throughout the movie, that was real in history.  Those types of knives were used were used to fight real wars and battles, so I wanted to present the realistic side of it.

LMD:  A common denominator in your films is the presence of Song Yang, who’s been in each of your features and plays Geng the apprentice in THE FINAL MASTER.  What are his qualities as an actor that make you want to include him in your films?

XH:  It’s personal, but for me as a director, using really famous actors doesn’t really give me fulfillment or self-satisfaction.  As the director, I really want to try to explore and experiment with whether I can cultivate and educate a person who has no fame and then turn him into a really good actor.  There are actually two aspects to the experiment; can I turn someone who’s not famous or a non-actor into a really good performer?  The second thing is, can I really train a person who doesn’t really know martial arts at all into a real martial arts, kung fu star?  Song Yang fulfills both of those roles, and I’m really happy with that.

LMD:  Last week, I ran into your previous filmmaking partner, Director Wong Kar Wai, who still loves to discuss THE GRANDMASTER.  I felt there was a similarity here in the strong portrayal of the story’s women.  Is presenting strong female characters something you keep in mind or is important to you to show onscreen?

XH:  Basically, in Chinese culture, {the role of women} is very different from the Western culture: in the Western culture, often between the man and the woman, it is assumed that the woman supports and creates the family, and it’s a simple as that.  But in China, most of the time, the complexity of marriage can be really, really big, and also once you become the wife of somebody, your whole family or household can be 50 different people.  So, in this household, she is constantly dealing with a lot of different things in the small society - even that is a complexity.  Also in China, traditionally, women have the management power of all the wealth and money and all the things having to do with finances, so they have this power which is traditionally given to them.  I’m just presenting how traditionally women were in the whole society on the big screen.

LMD:  Of course I can’t end this interview without asking about that amazing climactic fight in the alley between Master Chen and the opposing masters.  Would you please talk about designing that fight and training the actors in that scene?

XH:  So, for the seven minute long alley fight scene…  Most of the time in other Chinese films, if you have a very open kind of environment, that’s basically how you present different techniques in your kung fu and movements, but I loved narrowing it into this limited environment.  In this limited environment, you can actually show more about the technique, because there is no extra space for you to get away, so you have to be really correct and accurate about your movements, and how you think you can get to the final one and win this whole battle.  That’s what I liked about the whole narrow alleyway fight scene.

For the training process of all the actors, I trained and taught Liao Fan myself.  And as for the other actors in that fight scene, actually most of them are martial artists themselves.

LMD:  Can you tell us about your next project?

XH:  The next movie is in preparation right now.  It’s set in 1933.  It will be the last battle using the cold weaponry before World War II.  There is a battle on the Great Wall between the Chinese and the Japanese, and the Japanese have learned all the techniques from the Western world, from France and also Germany, and they will use the Western way of using knives.  Chinese people are still using the knives and techniques traditionally.  So, they are going to fight on the Great Wall and this is the final battle using the cold weaponry.  It will probably come out next year.

Do you feel this content is inappropriate or infringes upon your rights? Click here to report it, or see our DMCA policy.
Chinese cinemakung fuLiao Fanmartial artsSong YangThe Final MasterXu Haofeng