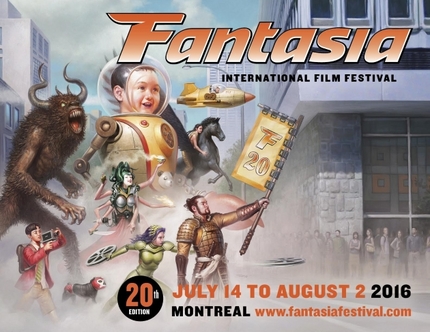 With the mega-sized Montreal genre-fest hitting its two decade milestone this year, Fantasia is pulling out all the stops. The first announcement offered details on their now mature and thriving film development market (Frontieres), as well as several world premieres, mutliple Miike films, fresh cinema from several accomplished veterans of horror, science fiction and action filmmaking.

One thing Fantasia has positively excelled at is their regional spotlights. In the past, personal favourites were the Serbian Spotlight as well as the Manila (Philippines) Spotlight. This year, there is a spotlight on Polish genre cinema, perhaps inspired by the passing of Polish master Andrej Zulawski, for which a restored version of On The Silver Globe. The much younger Marcin Wrona also passed last year and his final film Demon will be in the spotlight along with several other filmmakers.

Also, the weird and challenging Camera Lucida is back, a programme that looks for the new and unusual genre filmmakers that are interested in telling stories in new and unusual ways. At Fantasia, off the beaten path is the best path taken. And if Hong-Jin Na's The Wailing never opened in your filmmaket or played a festival near by, Fantasia is a way to catch this along with cult favourite Nakamura Yoshiro's latest, Inerasable and Nathan William's thriller, If There's A Hell Below, among others.

And finally, if you got the chance to experience the glorious deadpan insanity of Bennett Jones' I Am A Knife With Legs last year, DIY Sidebar, Fantasia Underground returns with a slew of raw, hand-made, crazy.

Go on and peruse the full release of titles from the second-wave announcement, it is included in its entirety, below: