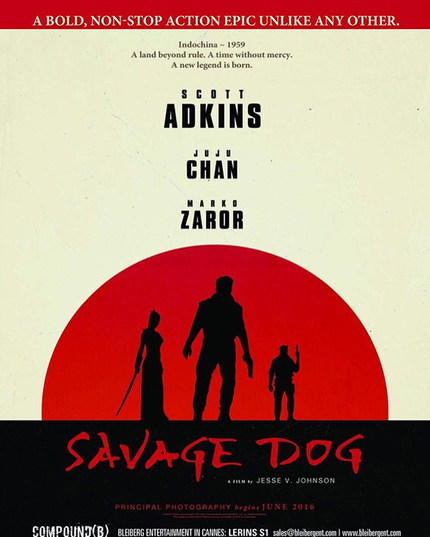 As if director Jesse Johnson's latest, Savage Dog, didn't have enough action star power, it appears he's left room for another in the line-up with the addition of retired UFC fighter Cung Le. Zaror posted the pic you see beneath less than a day ago, signaling Le's arrival which now totals it to four with pound-for-pound star Scott Adkins and actress and martial artist JuJu Chan also starring.

Plot details are certainly nil while all we have is what Bleiberg Entertainment's Cannes poster hints at: A story set in Indochina in 1959, a land beyond rule and a time without mercy, and the birth of a legend....

...And that's it. That's all we get so far while everything else is a big mystery, except we simply have to trust that with the venerable Johnson at the helm following a stellar and progressive career in stunts and action movies easily readable at IMDb along with the reunion of Adkins and Zaror since going toe-to-toe in Undisputed 3: Redemption (2010) and the likes of Le with credits in Puncture Wounds (2014) and The Man With The Iron Fists (2012) and Chan fresh off of co-starring in Crouching Tiger, Hidden Dragon: Sword Of Destiny (2016), that Savage Dog will be a beast of an action flick yet.

Do you feel this content is inappropriate or infringes upon your rights? Click here to report it, or see our DMCA policy.
Cung LeJesse JohnsonMarko ZarorSavage DogScott Adkins