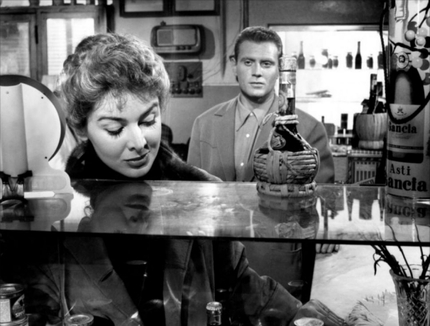 When one considers the work of Michelangelo Antonioni, the terms "crackling pace" and "dialogue heavy" likely do not spring to mind. Yet, both apply quite prominently to the director's 1955 female-centric drama, Le amiche (The Girlfriends).

Within five short years the director's reputation would be cemented as one of the foremost auteurs on the buzzing "world cinema" landscape. With 1960's radically groundbreaking L'Avventura, Antonioni would permanently turn a corner into the philosophical and sociological avant-garde. When it came to crafting stylized visuals while communicating themes of alienation in the modern world, he was the undisputed maestro.

This phase gave way to Antonioni, via his latest works, being loudly proclaimed, debated and anticipated. Films such as Red Desert (1964) and Blow-Up (1966), love them or hate them, were unavoidable on the intellectual cinema-going front, itself a considerably more vital segment of pop culture in that era. Peoples minds were regularly being blown as a certain synergy between both the rising counter-culture and the fine art world was occurring. Antonioni, in short, mattered.

Cut to today: If contemporary cinephiles know the name "Antonioni", they still likely haven't experienced any of his work. Many simply haven't heard of him. The debate can be had in regard to what degree this is important or not, insomuch as we debate whether school kids still need to be taught to spell in the age of spell-check. But one thing we do know is that dying history is apropos to dying roots. The artists that have mattered in this medium we love so much must be remembered and understood. 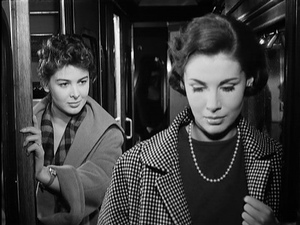 In this spirit, understanding the early work of Antonioni is an eye-opening undertaking when it comes to engaging his aforementioned later, vital work. Le amiche, while admittedly not a vital work nor an Antonioni masterpiece, nonetheless warrants such attention. The filmmaker proves he can craft a film that is entertaining and intelligent, and that he knows how to fully utilize a skilled acting ensemble.

Although the austere overtones of his later work are not present, their signifiers are evident. Centering on a group of upwardly mobile Italian young women, Le amiche appears to be a frivolous puff of a film; a modernist missing link between the classy Hollywood “women's picture” sub-genre, and the more recent Sex in the City or Girls. The latter comparison is made in one of the two bonus feature interviews of this Criterion Blu-ray release, and it's not inaccurate. Yet, Le amiche amounts to more than the sum of its influences and/or influencers.

Beautifully shot in black and white in the rebuilt and thriving Italian city of Turin, Antonioni mines the workaday vanity of the rising Italian fashion world. Fashion, as it's charted by scholar Eugenia Paulicelli in her Criterion special feature interview, is a key element in Antonioni's cinematic palette. The outfits, their fabrics, their colors, textures, and the way they move are all subtly telling of the characters' emotional and mental states. Most of it is lavish, most of it is classy, all of it is interesting as immediate extensions of the ladies and their places in this shifting world of women in the professional world. Common to Italy of the era, one has just attempted suicide. 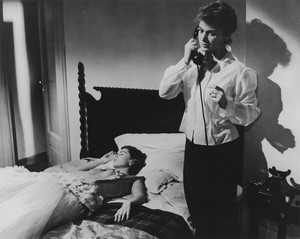 If the film's story is happening most to any one person, that would be Clelia, the visiting fashionista played by the wonderfully expressive Eleonora Rossi Drago. Clelia arrives in town for purely professional reasons, only to be blindsided by the fragile Rosetta's (Madeleine Fischer) attempt to take her own life, and the loutish affections of serial cheater Lorenzo (Gabriele Ferzetti's dry run at the character he would immortalize in L'Avventura).

Things get done, but things get complicated as things deepen. All the while, it is inherently watchable: Le amiche pops with lively energy all the while, with sharp, wall-to-wall dialogue, terrifically timed action within the frame, and nearly continuous motivated camera movement. It's Antonioni dancing on the edge of screwball comedy, but with loss of self and suicide in the mix. (Suicide being an old Antonioni theme, as evidenced in his earlier 23 minute documentary short, Tentato Suicidio, itself a spiritual prequel to this feature. It's made up of a series of individuals who've attempted to kill themselves sharing and re-enacting (!) their stories for the camera. It can be found on Raro Video's blu-ray of Antonioni's 1953 murder triptych I Vinti.)

There's little doubt that Antonioni is a filmmaker who loves women on multiple, sometimes conflicting levels. Even as he joins the ranks of Kenji Mizoguchi and George Cukor as a high profile sympathizer to the plight of female social oppressions of his time and place, he nonetheless also remains a party to a succinctly male point of view, coming from an assumed place of age-old privilege.

It's not that at the end of the day, the tear-strained trials of this group of attractive young ladies are but pawns on his chess board of narrative amusements. Rather, it's as subtle as allowing the women's storyline to ebb and flow based upon their male love relationships. While being torn between between traditional homely wife expectations and the then-newfangled workplace opportunities was a likely source of tension in the lives of many women, Antonioni's film goes as far as to change the murky reasons of a woman's suicide attempt in the source novel to rooting it explicitly in a man's rejection of her. Even in this heavily feminized tale, the patriarchy reigns down both onscreen and off.

But, that doesn't make Le amiche a bad film. It does in fact make it a noteworthy film in terms of understanding Italian attitudes in this time and place, and for processing Antonioni's evolving observations of such. Thanks to the confluence of fine, understated acting and the perpetually energetic quality of the directing, Le amiche is satisfying cinema detailing shifting social norms in a changed, modern world. 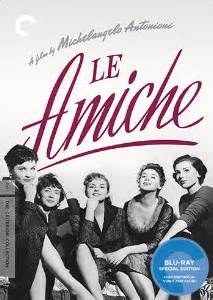 Criterion's Blu-ray release of Le amiche is a most welcome addition to their impressive Antonioni output over the years. The 2K transfer utilizes a recent digital restoration, and it looks astonishing.

The package is noticeably light on bonus features, offering a mere pair of video interviews, each running about twenty or so minutes. But the content put forth by the participants is solid and thought provoking, enhancing the experience of the feature presentation. Finally, there is the paper essay insert, written by film scholar Tony Pipolo. It's not the breeziest read in the world, but those interested in how the film relates to its literary source material, the 1949 novella Tra donne sole (Among Women Only), by Cesare Pavese ought to be happy with it.

Criterion's Le amiche is an approachable entry level film for those unfamiliar with Michelangelo Antonioni, and a much-appreciated Blu-ray for the seasoned cinephile.