Review: MONEY MONSTER Takes A Hostage With A Sense Of Humor 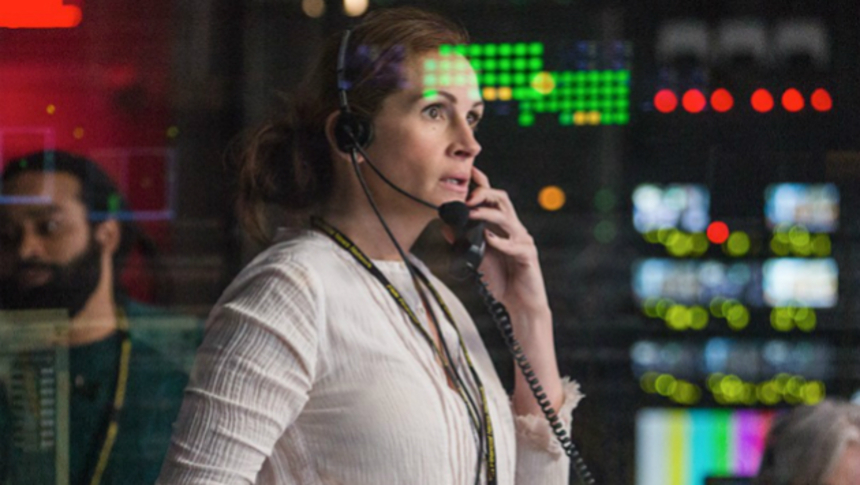 Pleasantly surprising, Jodie Foster's Money Monster is better than expected, in large part because it's not as straightforward as it initially appears.

The setup, in fact, leads one to believe that the movie will be a deadly serious hostage thriller. George Clooney stars as Lee Gates, the live-wire host of a cable television show that dispenses financial advice in a hyper, supposedly entertaining fashion. Julia Roberts plays Patty Fenn, the show's director, who always remains cool and calm while Gates, loose as a goose, ignores the scripted dialogue and performs his wacky business analysis routine, complete with recommendations on which stocks to pick.

The goofy momentum is halted when a stranger enters the set of the live show and fires a gun into the air. He then instructs Gates to put on a vest equipped with a bomb and demands that the show remain live on the air. His next demand? To find out who is responsible for the loss of his entire life savings, suffered when he followed Gates' advice to invest in a company whose stock dropped precipitously, resulting in the loss of some $800 million for the company's stockholders

What Kyle Budwell (Jack O'Connell), the quickly-identified gunman, really wants is for some one to step forward and admit culpability. The money, he claims, is beside the point. It sounds, therefore, as though the movie wants to uncover The Big Lie about our worldwide financial system, or something of equal and principled significance.

In reality, Money Monster has something far more basic in mind, fashioning a star vehicle for Clooney and Roberts that is intended to muscle its way through potholes with cheeky charm and sincere concern for less fortunate souls. That becomes apparent when the tone switches from deadly serious to joking and lighthearted.

In retrospect, the serio-comic approach manifests itself briefly even in the opening moments. Before the show begins its broadcast, Lee and Patty engage in lighthearted banner that establishes their comfortable, even familial relationship; they've obviously been working together for a long time, and Lee, for all his egotistical behavior, is willing to listen to her (occasionally). Indeed, for all the stress and tension that plays out between Lee and Kyle in front of the cameras, the action behind the cameras plays out as a workplace comedy/drama, filled with warm concern and respect expressed by the exceedingly polite Patty toward her fellow workmates. To be sure, they're all pawns that she's moving around with as much precision as possible, but she never hurls insults at them and she always treats them like a mother gently imploring her children to behave properly and as she expects.

For his part, Lee's hubris is initially cut down to size by Kyle's furious anger (and the gun he's wielding and the bomb he's strapped to the broadcaster). Things do not stay the same between them, and one can feel the star power of Clooney waxing and waning as needed for the character throughout the story.

While Clooney and Roberts flex their star muscles, English actor Jack O'Connell adapts a very broad "Noo Yawk" accent that makes him sound like one of the Dead End Kids, filled with "deese" and "dem" pronunciations, perhaps intended to make it abundantly clear that he's "one of us," an ordinary citizen who was duped by a television show.

It's a questionable foundation on which to build the movie, and might be fatal if there weren't other indications that Money Monster should not be taken seriously. It's not only the wavering tone, it's also the plot, which tries to tell a complicated narrative in far too little time to make sense. Truly, it feels like someone summarizing a dictionary in five minutes or less.

What's left is the star power, not only Clooney, Roberts, and O'Connell (despite his dodgy accent), but also the supporting cast, including Caitriona Balfe, Giancarlo Esposito, Christopher Denham, Chris Bauer, Condola Rashad, Aaron Yoo, and Dominic West. They give meaning and edge to their characters in an absolute minimum of time.

It's a nice change of pace for director Jodie Foster, who shows that she's more than capable of turning out a studio product that's aimed at the mainstream and delivers a bit of sizzle, if not steak. The fleet running time (98 minutes in total) means that Money Monster races through its more troublesome moments, putting a premium on lightly memorable entertainment. It won't change the world, but it passes the time pleasantly.

The film opens in theaters today in France, Hong Kong, Italy, the Netherlands, and Portugal, and tomorrow in Canada, Singapore, Taiwan, and the U.S. It opens throughout other parts of the world in the coming weeks.