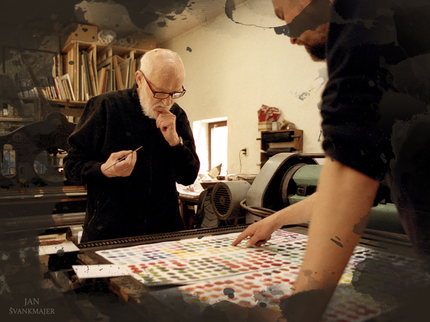 Czech surrealist and legendary filmmaker Jan Švankmajer´s is bracing for Insects, a project that will be his last feature film. The project got stalled a bit being announced as in development as early as 2011 (with the premiere date set for 2015). It looked like things got in motion in 2014 and his first feature since 2010´s Surviving Life (Theory and Practice) had appeared to make progress with principal photography originally set for January 2015. However, a new crowd funding campaign reveals a lack of funds to finish the project.

Insects is loosely based on a 1922 allegorical comedy From the Life of Insects by Čapek Brothers written as a critique of contemporary society spiked with, obviously, bits of Kafka´s The Metamorphosis. The film is based on the filmmaker´s film short story from 1971 that was published though not shot. The story follows amateur thespians meeting in a pub to stage the Čapek Brothers´ play and their lives pervades those of the characters they are supposed to play. Mr. Borovička´s take on an insect he is playing is so compelling he even leaves permanently his human form. Švankmajer´s long-time producer Jaromír Kallista called it “ a black grotesque”.

“The Čapek brothers' play is very misanthropic. I've always liked that — bugs behave as a human beings, and people behave as insects. My screenplay extends this misanthropy further while also reflecting Franz Kafka and his famous The Metamorphosis,” comments the filmmaker adding concerning the formal aspect that “the type of animation we choose, as well as the overall design concept, should emerge from the formal experimentation we have to conduct before we start shooting. What I can say is that we will not be using computer animation (which I have strong reservations about), but we will rely, as in my previous films Lunacy and Surviving Life, on traditional or ‘classic’ animation”.

“It gets increasingly difficult to fund independent art that scrutinizes the very core of our society. Who would deliberately support their own critics? We make a film every five or six years not because of a lack of ideas, but due to the lack of funds to back up our projects. Crowdfunding may be the way to change this” Švankmajer addresses the lack of funding elucidating the long waiting.

When the crowdfunding is successful, the shooting can start as soon as late Summer/early Autumn of this year with projected 170 shooting days (because of combination of real-life acting and animation) followed by lengthy post-production would bring the film to fans in the second half of 2018. The organisers of the campaign guarantee that the film will be first seen by backers which is really a perk considering some filmmakers leaving their backers to wait until the film finishes rounds on the festival circuit.

The goal of $150 000 is just the budget necessary to shoot the film with actors and the organisers confessed that a bit more would be needed to finish the post-production stage outlining several stretch goals.

The filmmaker´s producer Jaromír Kallista of Athanor production outfit provided a statement for ScreenAnarchy regarding the last feature film of Jan Švankmajer: "Jan Švankmajer is 82 years old, I am 77 years old. For last 30 years, we managed to make six feature films which means it took five years in average to get one project done from funding to distributing it. We are on the brink of the shooting and Insects should premiere in Autumn 2018. At that time, Jan will be 84 years old and I will be almost 80, if we last until then. I doubt we will have any zeal, energy and capacity left to make another feature. It is just this simple and merciless math. If God is willing, we will be working on a series of activities such as exhibitions, showcases, maybe a short film but we will se about that if we last until then."