Blu-ray Review: Nicholas Ray's IN A LONELY PLACE, A Requiem For Love 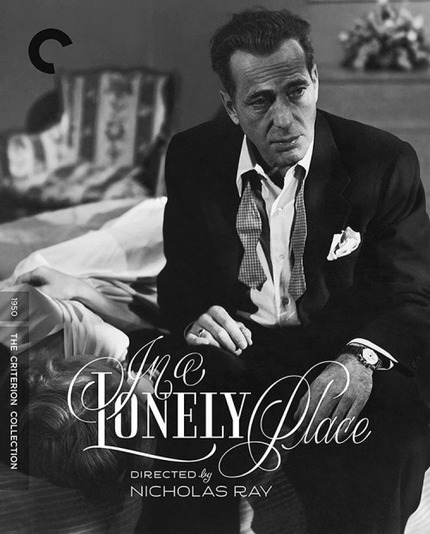 I was born when she kissed me. I died when she left me. I lived a few weeks while she loved me.

I've only seen a few Nicholas Ray films, but after those I cannot help but be convinced that he was one of the greats. Like about 100 million other people in my generation, the first Ray film I ever saw was the timeless classic of teenage rebellion and the disintegration of the American Dream, Rebel Without a Cause. This is undoubtedly Ray's calling card to the future and the film by which he will be remembered. This work, which also created an eternal iconic identity for the ethereal James Dean, the fractured and tortured Sal Mineo, and the never as good again Natalie Wood, is one of the key works that brought films out of the frequently campy closet and into the increasingly real world of post-War realism.

Ray's keen eye for drama and incredibly astute skills in identifying characters for whom fantasy worlds trump and often destroy perfectly adequate reality have always been his hallmark. 1950's In a Lonely Place is a wonderful drama about the damage that men do to themselves when they aren't paying attention. Ray's work is undeniably masculine, from Humphrey Bogart's icon of '40s masculinity in In A Lonely Place to his similar dissections of the machismo myth with James Dean. Even Joan Crawford gives an arguably masculine performance in Ray's iconic western, Johnny Guitar, while a career best James Mason plays a man crumbling under the strain of his own expectations in Bigger Than Life. Suffice to say, Ray knew men.

For In a Lonely Place he took Bogart, by then an actor past his prime but still well in control of his destiny and commanding of an audience, and cast him as Dixon Steele, a screenwriter desperately in need of a hit. The film was based on a book by Dorothy B. Hughes, and the Steele character is written as an indictment of the blatant misogyny of '50s America. Whereas in Ray's film, Steele is the sympathetic character who, for all of his faults and foul temperment, is just trying to become whole and find the love of a good woman.

With several years between him and his last hit film, "Dix" is in the desperate position of being forced to adapt books in which he has no interest. When he stumbles upon a waitress who knows the book he's supposed to adapt, he invites her back to his place to tell him the story so he can avoid reading it himself. When he sends the girl home after discovering that neither she nor the book are worth the effort, she ends up dead and Dix is the main suspect.

Into his life swoops the lovely and self-assured Laurel Grey (Gloria Graeme), an "actress" who lives in the same apartment building as Dix and who has been questioned in connection with the girl's disappearance. Quite quickly Laurel and Dix fall for each other, and both of their lives go into an upswing, even as the police department continues bearing down on him.

What follows is an intricate study of the ways in which people can crumble under intense pressure. As the police continue to insist Dix is the murderer, he exhibits erratic and infrequently violent behavior against strangers, while his relationship with Laurel hits a completely understandable breaking point. Are Dix's outbursts a product of the pressure or a clue that he's to blame? Soon Laurel must choose who to believe and no one, not the police nor Dix, are making it very easy.

Humphrey Bogart had played innumerable hard-as-nails characters before 1950, but perhaps never one so obviously vulnerable as Dixon Steele in In a Lonely Place. Ray's treatment of the character as a wounded animal looking to strike out at anyone who got too close exemplified his understanding of the fragile male ego and how easily it could break. Dix loves Laurel, and Laurel loves Dix, but in the end, is love really enough when survival is at stake? These are questions that Ray asked over and over again in his films, and In a Lonely Place is an expert example of his keen understanding of the male ego and its fragility.  It's a beautiful, sad film that deserves your time and attention. Some of its conventions will feel old fashioned, but none of its feelings will.

The Criterion Collection have released In a Lonely Place on a predictably stellar disc. The image quality is quite good, though not the best I've seen from the era. The image is crisp and sharp, the shadow detail is remarkably good, and overall it's a very impressive visual presentation. The uncompressed LPCM mono soundtrack is also quite good, with dialogue and the lovely score from George Antheil both coming through quite clearly.

The extras on the disc really go the extra mile, as one might expect with Criterion discs. There is an audio commentary from the author of the BFI monograph for In a Lonely Place Dana Polan wherein he discusses the film in depth including specific details from scene to scene. The 40-minute documentary I'm a Stranger Here Myself from 1975 takes a look at Ray's work as a professor of film studies while he shot We Can't Go Home Again with his students along with anecdotes and interviews from his earlier career and collaborators. Also included is an interview with Gloria Graeme biographer Vincent Curcio, a 2002 piece from Curtis Hanson about the production and inspirations behind In a Lonely Place, and finally an hour-long 1948 TV adaptation of the source material for the program Suspense. Finally, the package closes with a wonderfully in depth essay from Sara Smith, regrettably printed on Criterion's new fold out styled booklets.

In a Lonely Place is a film whose reputation precedes it with good reason, it's a masterpiece and one of the films that best represents America's transition from the '40s to the post-war era. If you haven't seen it - like I hadn't - do yourself a favor and get on it!