A HOLOGRAM FOR THE KING: Tom Tykwer Talks Tom Hanks And Breaking Borders 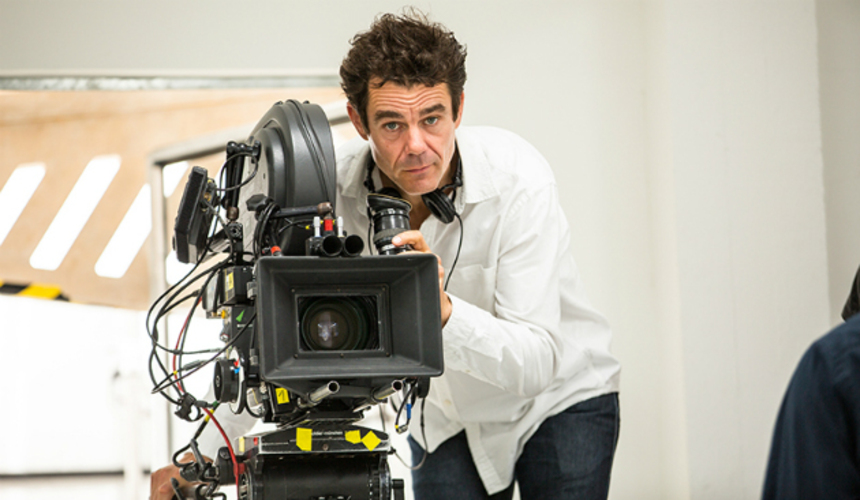 With a career that’s been nonstop since setting off cinematic sparks with the kinetic Run Lola Run, director Tom Tykwer spoke to us about his latest film, A Hologram for the King.  Tykwer talks of depicting realistic Muslim characters, breaking borders through the internet, and recasting Tom Hanks as the bad guy in Se7en.

The Lady Miz Diva:  Everyone is used to innovation in your films.  I loved the opening music video sequence of Tom Hanks singing the Talking Heads’ Once in a Lifetime.  Were there meant to be more surrealistic moments like that in the film?

Tom Tykwer:  Well, there are, but they are inherent to the film, right?  I mean, the whole idea of this guy in this business suit in the middle of nowhere, standing there in the middle of the desert and nothing around him, and he’s supposed to do big business is actually crazy enough that you don’t have to add much to the image once you have it.  Once you have Tom Hanks standing there in the middle of the sand, I think it’s the only way to go, really.  It’s a really, really powerful image that I felt like we can build on, we don’t need to fuel it too much.  There’s a different energy about the film that doesn’t look for a lot of crazy, fun filmmaking moments because the story itself is already twisted.

LMD:  In your director’s statement, you said that you felt this was a film that had to be made quickly, that it couldn’t wait.  Why did you feel like that?

TT:  I’m not even sure about it now, because there’s something great about the concept that I’m sure will be interesting and relevant even in a decade or so, which is the same about the novel.  I thought the concept of the novel was really that it had the feel of a classic novel, and that’s so amazing about Dave {Eggars}, how he can combine this kind of sense of universal, never really aging way of storytelling, with something that’s so acute as this depiction of the crisis of the times, and the crisis that’s inherent with the tale is in the fabric of the whole.

I felt somehow – and strangely it’s developed even more - that right now we really need tales that remind us that no matter how much the political and religious systems try to separate us, we are actually pretty connected.  One of the great upsides to the digital age and so-called globalisation is that there is more connection done apart from the government-directed media.  The way that people communicate has gone through the Internet into completely new ways of encountering, so we know more about each other than we ever did before, which is a big opportunity and chance for us to reach out and connect outside of the constructed systems of religion and politics, which I think is super acute as a subject.

LMD:  I’m particularly compelled by the character of Zahra.  What helped you create this fully-realised depiction of an observant Muslim woman, who is also a strong, independent, sexual person?

TT:  And it’s real, I mean, they do exist.  Of course, they are still a minority, mostly because they’re not being allowed to live like this, but it’s a growing amount of women who just do it and still stay where they are because they say it’s going to change.  We have to stay here.  We have to sacrifice a bit.  Because of course, a woman like Zahra could really go to the west and lived there, but she, like many of the people I’ve met in Saudi Arabia when I went there, they have one leg in and one leg outside of the culture.

They really love their heritage, their home, and their home country, and they have not only a broken-up relationship with their culture and their cultural history, but at the same time, they have had the opportunity to visit the west and other places, not only the west, but the rest of the world, and they live in the online community.

So, they’re just more open-minded than their societies are, and they live this kind of dual life of just waiting for the government to catch up.  And they will, they say, ’We don’t need a revolution, it’s just going to be a mess. We just need to be patient and there’s going to be more and more people like us.’ Also men, they are interested in the equality level, because it’s just more fun. {Laughs} And they will find out.

LMD:  You also have the character of Yousef, that taxi driver, who’s so fun and he kind of reflects what you just said.

TT:  Yeah, because he’s in the middle of it, you know?

LMD:  Exactly.  You mentioned visiting Saudi Arabia.  What kind of things regarding depicting the Muslim faith did you have to be careful about? Did you have someone to consult with on the film about sensitive matters?

TT:  Yes.  Most of all, of course, Dave had investigated the country quite intensely when he wrote the novel, and I kind of mimicked or recreated the trip that he made through the country.  So, I went to the same hotel room, I met the same guide was a really great guy; he was the role model for Yousef.

He was really this funny guy and actually some of the experiences that I met came into the film, even though they are not in the book; the way he handles the subject of executions - that it’s just part of his daily life.  It’s really weird, because it doesn’t feel like it’s really reflected, but at the same time, you can always say ‘Well, we’re not that much better about it.’ {Laughs} And then his not liking Alan to pick up with girls here, and at the same time of course he’s completely modern.  It’s actually contradictory, so he’s obviously a transitionary character of the society.

When I did this trip, I met all these kinds of people; and that people like Zahra, and then people like Yousef, and I met people who were really traditionalist and really conservative.  So, you have a real big variety.  And if you’re honest, if you take a very representative trip, let’s say, through the US, you will have the exact same experiences.

It depends on where you go, what people you mingle with?  Of course we can sit in the Bowery Hotel and have all very open-minded unity here, but I know there’s other places.  And the same in Germany; there’s places in Germany I wouldn’t invite you to go even with your hair. {Laughs} There’s just places they will look at you as a weirdo.  They are still very... you know?  Every country’s like that, and that makes us, again, more alike than we think.

That’s the big subject of the whole film, and for me, of the project, is that we’re saying in our diversities and unevenness as countries, we are much more similar than they want to make us think.  They want to make us think we’re really different, and they want to keep those borders alive.  Religious leaders want it to be as separate as possible: They don’t want Muslim and Christian religion to actually mingle.  But then it’s funny how easy it is for people to actually connect because that’s postmodernity, you know?  We’re so much closer than we used to be.

LMD:  It is pretty well known that Tom Hanks was a big motivator for the production of CLOUD ATLAS.  He was keenly interested in making A HOLOGRAM FOR THE KING.  What does he add as an actor, or as a pushing force to a film like this, or for you as a director?

TT:  You know, without him, I wouldn’t have done it.  No, I couldn’t imagine anybody else.  Not only because we had met, but also because his gravity, his profoundness, his intensity as a presence in a film like this will make it believable.  It will make it believable as a tale of someone who has to let go of so many preoccupations, and so many masks, and so many things that he is used to, that I really didn’t feel that you could work it with a constant sense of sympathy for the guy without Tom.  I wouldn’t have really pursued the project, honestly.

Because I think if we’re honest, Alan Clay enters the room as some kind of guy who’s stuck in behaving like a prick. {Laughs}  You know, some business guy who’s got his old rules and his old schematic ways of encounter, and they’re really dated - his old jokes and all this stuff - but because it’s Tom, you still like him.

There’s always something human and beautiful about him, no matter what you do, no matter how stupid he behaves.  And in the movie, that’s what you need, you need a hero to be able to misbehave and you still stay connected with him, which is what he creates.  It’s a miracle how he does it.  I think even if he had played Kevin Spacey’s part in Se7en, you would’ve really liked the killer. {Laughs} You would’ve felt connected with the guy.

That’s an insanely unique quality that only he brings along.  More so, then, when you watch him let those masks fall and you have a much more vulnerable and sensible and sensitive character come to life underneath.  It’s heartbreaking and it’s deeply moving.  He’s one of the few who has that scale of expression with a never stopping sense of connection.

LMD:  Ben Whishaw… {Whishaw makes a cameo in the film}

TT:  Yeah!  He has to be there in every movie, okay?  I can’t do it without him. I don’t know how to do it.  And if there’s no part for him, he just has to have some appearance.  We’re just really connected and good friends.  I really look forward to have something bigger for him again, you know?

LMD:  Sadly, we’re running out of time, but I would love to know what is next for you?

TT:  I’m doing a TV show.  A 16-episode first of three seasons that I’m starting to film in three weeks, which is why I’m in a crazy state.  It’s called Babylon Berlin and it’s set in Berlin.  It’s a Weimar Republic kind of romantic book tale set on the super exciting streets of Berlin of 1929.  There’s cops, and politics and nightlife and cabaret and all of it is wild.  It’s really exciting.  German language! {Laughs}

A Hologram for the King is now playing in select theaters in the U.S. It wil expand further on Friday, May 6.

Do you feel this content is inappropriate or infringes upon your rights? Click here to report it, or see our DMCA policy.
A Hologram For The KingBen WhishawComedySarita ChoudhuryTom HanksTom Tykwer

More about A Hologram For The King