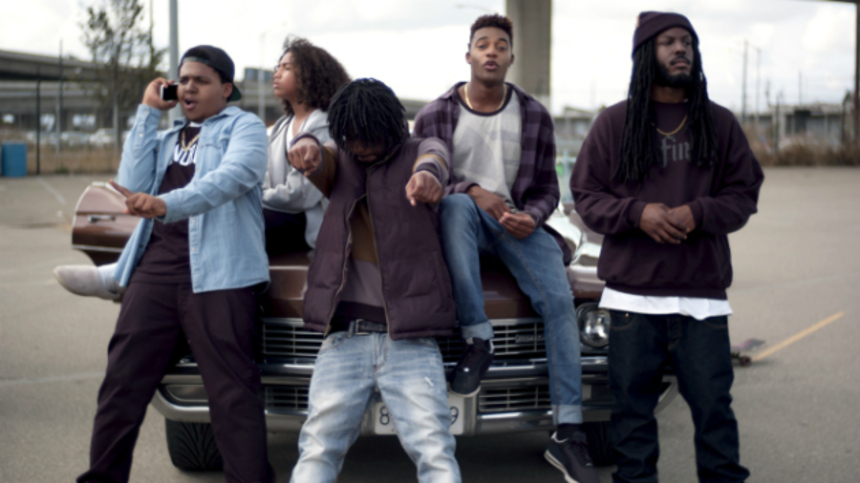 Kicks, a film about a hapless teenager who finds himself launched into the Bay Area's violent underbelly after being jumped for his new sneakers, bristles with immediacy, excitement and urgency. It's a remarkably assured, confident movie for a debut feature -- though director Justin Tipping has already experienced some success with his short films -- and has already generated well-deserved buzz.

Jahking Guillory plays Brandon, a diminutive 14-year-old boy who feels his small size, poverty, and all-around lack of cool are ruining his life. One of those problems can be solved, he thinks, by having some shiny new sneakers (original Air Jordans purchased from the trunk of someone's car). Unfortunately, not long after the titular kicks start working their magic on his social status, he's jumped by a group of much larger young men and watches them take his hopes and dreams away with them. After some reflection, he decides to venture deep into Oakland on a mission to get them back.

Coming-of-age films, no matter how strong the direction and cinematography may be, cannot succeed without endearing performances from their young actors. Kicks, boasting a cast that oozes both charisma and vulnerability in turn, certainly doesn't have that problem. Guillory is perfect as the lead, but the most memorable performance comes from Christopher Jordan Wallace (automatic hip-hop royalty as the son of Notorious B.I.G. and Faith Evans) as Albert. One of Brandon's two best friends (the also impressive Christopher Meyer rounds out the trio), Wallace provides most of the film's biggest laughs while also handily delivering the pathos required in pivotal scenes.

As good as Kicks is, the film has a few flaws that hold it back from being truly great. The recurring visual motif of Brandon imagining an astronaut, for instance, never fully gels as a metaphor and becomes an annoying distraction that trips up the movie's otherwise pitch-perfect pace. There are also a few moments where the tonal shifts are too severe, and it doesn't help that these shifts are back-loaded to the final half hour; Tipping makes his final points abruptly, rather than more gradually, and logically, building toward his film's conclusion. Still, this is a fine debut that announces its director as an exciting new talent.