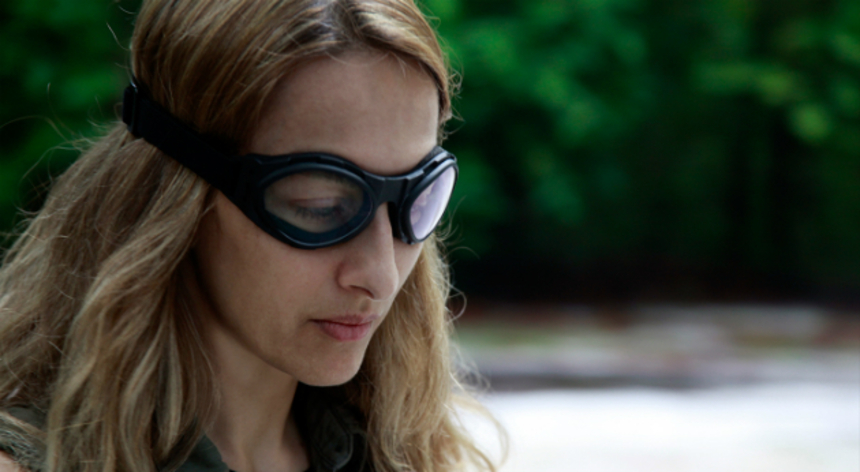 Icaros: A Vision is about a white, American woman who -- confronted with a terminal illness -- embarks on a trip for a seemingly indefinite stay at a Shamanistic resort in the jungles of Peru.

With a synopsis like this, I was concerned that Icaros would succumb to certain tropes of the white-tourist subgenre (think Eat, Pray, Love and The Best Exotic Marigold Hotel), which are at best hokey and insincere, at worst offensive and reductive. Mercifully, the film avoids most of the problems that characterize such films, and emerges as something else entirely.

Once the film's ostensible lead heroine, Angelina (Ana Cecilia Stieglitz) arrives at the resort, she serves as the audience-surrogate for really only the first quarter of the film. After this, both her fellow miracle-seekers and the facilitators become equally integral to the proceedings as is the putative protagonist. Icaros becomes less about her 'journey' (and thankfully doesn't ever sentimentalize such a concept), and instead favors an immersive experience of psychedelic visuals throbbing between quiet, mundane moments that occur about the camp. The enchanting, reality-distorting effects of the Ayahuasca plant that provides the foundation for the Shaman's treatments are deftly contrasted with decidedly less intoxicating aspects of life in the jungle; for instance, a devastating case of diarrhea and many a failed webcam/phone conversation.

Mostly though, Icaros is concerned with replicating the experience of being under the influence. In the most obvious and basic sense, this refers to the effects of the hallucinatory plant Ayahuasca. More broadly, it refers to the physical effects of fear, isolation, and desperation. Director Matteo Norzi gives the film plenty of time to breathe; the dark, sticky jungle takes on a life of its own as the resort's inhabitants give in to the visions, ailments, and emotions that arise as a result of their own personal baggage as much as the concoctions dispensed to them each night.

In the stillness of the jungle, a palpable humidity is felt through the screen. The foliage surrounding the camp is dark and mysterious, recalling Apichatpong Weerasethakul (a shot of multiple glowing eyes peering from within the trees at night may be a direct nod to Uncle Boonmee). Icaros: A Vision succeeds in creating a sense of place, at once tangible and amorphous, that benefits greatly from being seen in theatres.

Note: I'd like to acknowledge that one of the filmmakers, Leonor Caraballo, sadly passed away before the film's completion. Caraballo was suffering from breast cancer, and had a personal connection to the subject matter of Icaros.